Above: Watch how gently this appreciative dog takes its treat from grackle.

May 10, 2015: A sincere Happy Mom’s Day to the greatest people in the world. Got to see loads of families in church today and you could see how moms are close to one and all.

The blues keep comin’. The having-un reports also continue to overflow. I don’t know if it’s the shortage of other species but I can’t recall so many folks having so much fun with bluefish – a species often bad-mouthed, or worse, i.e. needlessly killed to allegedly make way for stripers.

(More pics and reports below:

Most insane fishing I have ever been a part of last night. Bluefish on pencil poppers for hours and hours and hours. This was my largest at 14lbs still trying to get my 20#. Low point of the night snapped my 9ft st croix doing something stupid.

Although blues aren’t biting into bass, per se, they’re taking a huge bite out of the available forage fish supply. However, as I over-repeat, bass are mainly bottom-feeders, living and breathing crabs unless something else just happens by.

If I had to visualize our spring stripers during this bluefish run, they’re pinned on the bottom, nonchalantly uncovering tons of crabs and worms, while way up the water column bluefish are maniacally pillaging. At most, interplay would be a few lucky bass gladly accepting any of the famed trickle down pieces from any forage massacre up above.

FINNING UP BLUES: Further proving the uniqueness of this spring’s bluefish showing are the numerous reports of bayside shallows/flats with bluefish fins and tails fully visible, as they openly prowl in maybe a half-foot of water. This sharkish surface look has virtually never been seen before in these parts.

One fin observer remarked at how structured the paths of the big bluefish were as they crossed acres and acres of flats. “I thought they would be tearing all over the place, all crazy. Instead they would move together, like a machine,” he said. 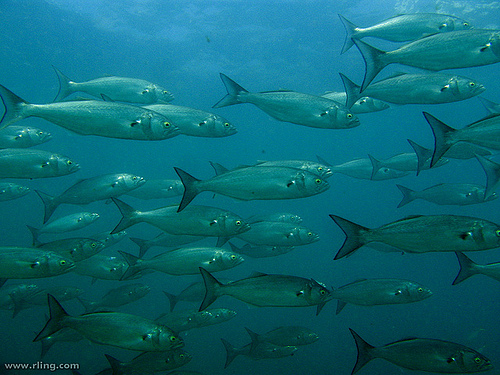 I had seen that same methodical method among cruising bluefish while I was diving in North Carolina. The only frenzy was when a school of prey was uncovered and scattered. But, as soon as the wild feeding session quieted, the blues would quickly regroup and resume a very controlled, almost orchestrated prowl.

That all makes caloric sense. Zipping every which-a-way is very energy-intensive. Steady and tenacious stalks conserve energy for those times when a balls-out attack is needed.  Below: 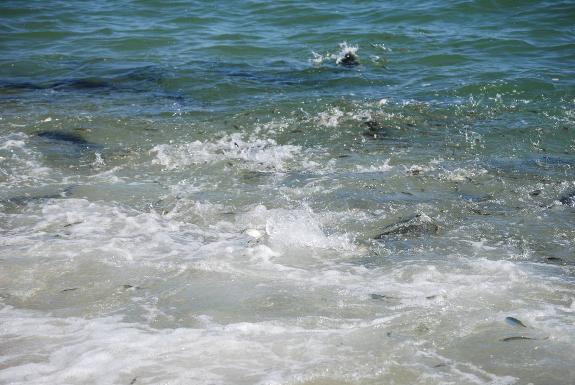 Forage-wise, I got word that some bluefish are holding “large spearing” in their bellies. That sorta makes sense in a forage fish way, though the “large” size of those spearing is a bit odd for this time of year. It might be a factor in this outlandish slammer showing – as might a dozen other factors, unique to this year. 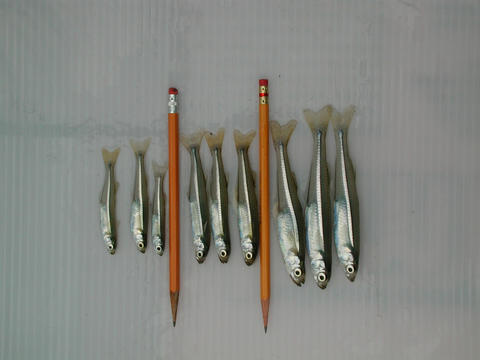 I wasn’t surprised to hear that folks fishing clams – some to avoid the bluefish – also met up with big blues. When I was way younger, my dad and I would go out night fishing on headboats and clams were the prime bait, even for blues. Also, one of the largest bluefish weighed into the LBI Surf Fishing Classic – when there were actually blues to weigh in—went for a clam. I think Mark J might have caught that fish. BASSING THROUGH THE BLUES: If I had to sort through the blues using bait, I’d go with bloodworms or sandworms fished near the bottom -- but not on the bottom, where crabs could have themselves as costly a meal as mankind can unwittingly provide.

The best way to pull off such a presentation is a modified pompano rig. Make it by taking maybe 18 inches of mono leader, tie two tight dropper loops (no more than two inches worth of dangle) eight and 12 inches up the line. Add  favorite worm hooks to the dropper loops – maybe a 1/0 or 2/0 circle hook, or a gold beak/bait-holder. Then, attach a sinker to the tag end, via snap swivel or a direct tie-on. 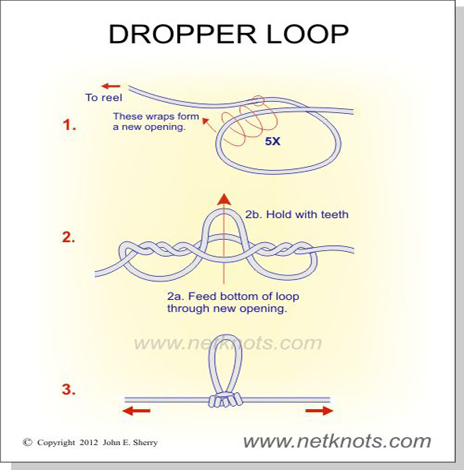 This avoid-the-blues bassing method requires rod holding, accompanied by the moving of the rig at short intervals. While crabs can still reach the worms, they’re often not as committed to holding on when rising out of their sand cover. That doubly applies when the bait has attracted bass. When fishing worms, it’s sometimes possible to detect arriving bass by the way the crabs will suddenly back off the bait.

My incredible mom and I going for an ocean dip way long ago ... 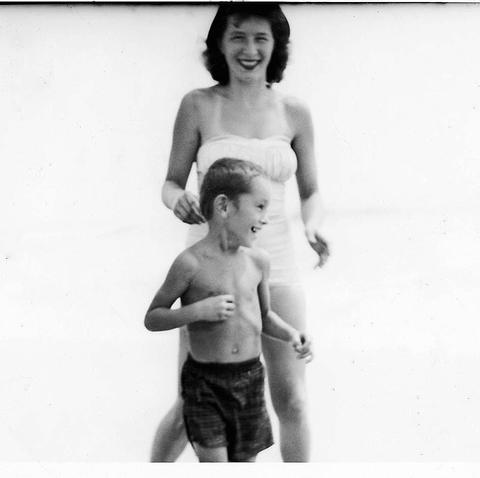 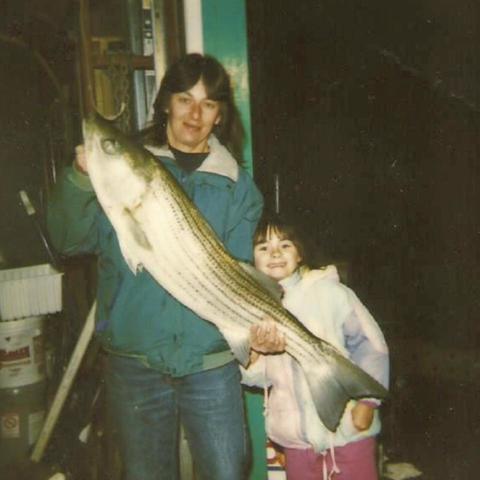 We're finally in after the long winter, and got booked for a 5hr Barnegat Bay Assault on the Bluefish by the Matt Windover Bachelor-Party Charter.  Uncle Tom Barnett, Brother Michael Windover, Larry McShane, Matt, and future-father-in-law Steve Simms had an EPIC bite on Barnegat Bay bluefish. All of the blues weighed between 10-15lbs. At one point, we had 4, and 5 guys hooked up at the SAME TIME - it made for cockpit craziness. After non-stop action on topwater poppers, S&S Eel-Z's, and Daiwa SP Minnows, we made an 1 1/2hr attempt at clamming for some striped ones. But after two rogue bluefish run-offs, it was back to the adrenaline pumping bluefish action. The guys did one of the best jobs at managing the blues - to have 5 hooked up at once on a 23ft boat with no tangles is something to be said.  We wish Matt and his bride-to-be the best of luck on their wedding day and future. To sum up the fishing right now - it is AMAZING.  Recently, there has been word of big bass caught - mostly a bunker spoon trolling thing right now, until the pods and water temps hit the right mark.

Hopefully, the remnants of this tropical system don't screw things as the bass bite has just begun.

As always, we always use the highest quality gear and everything is included all gear, tackle, fish-cleaning, and ice - you just come and FISH. 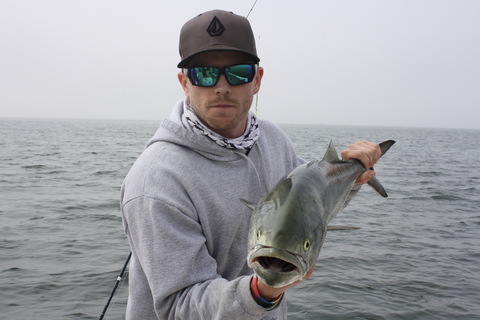 The drum are here! "There, now it's finally just right ... What???? I told you it was too stiff when you first bought it." ... Jeremy DeFilippis