A maximum-size mako clocks in at about 12-15 feet, which is pretty impressive in general fish terms, but isn’t quite up to the 18-21 feet documented for the big, dangerous sharks like whites and tigers.  A 10-foot mako would be considered rather large for the species, and an average-sized adult is probably somewhere between 6-8 feet.  However, makos are not well-known for their size, but their speed and agility.  The maximum speed attained by a charging mako has yet to be reliably recorded, with potential bursts of up to 46 mph.  This makes it certainly the fastest shark, and possibly the third-fastest fish in the ocean, behind only the sailfish and bluefin tuna.  In fact, other large, fast pelagic fish make up a decent chunk of the mako’s diet, especially when they can be picked off after being hooked.  Makos are probably a fisherman’s favorite shark to have on the end of a line, both because the meat tastes like swordfish but better and because they put up spectacular fights, leaping in the air and occasionally turning around to attack the boat.  This is one shark that really lives up to its reputation.

Anything dolphins can do sharks can do better. Except maybe breathe air. Image from newenglandsharks.com.

If a predator can be judged by its prey, then makos are among the elites in the shark world.  Stillwell and Kohler (1982) identified blue sharks, swordfish, large tuna, and sea mammal remains among the stomach contents of mako sharks along the U.S. east coast, but the diet was dominated by bluefish (Pomatomus saltatrix).  Bluefish are among the most voracious predators in Atlantic coastal waters, attacking in large schools and chopping up menhaden and herring nearly as large as themselves.  According to Stillwell and Kohler (1982), the Atlantic mako population consumes about 14.5 % of the entire bluefish stockper year.  Bluefish remained extremely important to the mako diet when it was updated by Wood et al. (2009).  Using updated estimates of the metabolic needs of these warm-bodied sharks, Wood et al. (2009) found that an average-sized mako needs to consume about 4.5 % of its body weight per day.  This leads to an annual consumption of 500 kg (1,102 lbs for the non-metrically inclined) of bluefish per shark.  The importance of bluefish in the diet has remained constant despite fluctuations in bluefish abundance, suggesting that makos in the Atlantic seem to have a particular affinity for these vicious prey.

In the Pacific, makos may be an important regulator of the infamous Humboldt squid (Doscidicus gigas).  Humboldt squid are the third-largest cephalopod on the planet and occur in much greater numbers much closer to shore than either giant or colossal squid.  They’ve also recently shown significant increases in population and expansions in range.  In the past few years, Humboldt squid have occurred as far north as Alaska, where they maypose a threat to valuable Pacific salmon stocks.  It’s thought that a combination of climate change and declining predator populations have lead to this explosion of squid.  Fortunately, the Pacific mako population is on it. 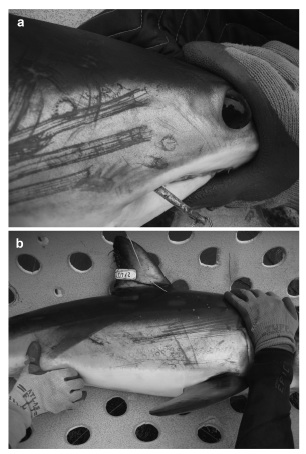 Vetter et al. (2008) used data from just about every research technique available to study interactions between the mako and Humboldt squid populations in the California current.  These included gut content analysis, identification of squid scars on makos, archival satellite tagging to compare the horizontal and vertical movements of both predators, and even plankton surveys to check patterns of recruitment for shared fish prey.

They found that Humboldt squid make up about a third of the mako diet, and that there is some dietary overlap between the two.  The sharks they tracked made a few dives into the Oxygen Minimum Zone (OMZ), where Humboldt squid lurk when they’re not hunting, but didn’t stick around for very long.  Since something as large and fast as a mako needs a lot of oxygen, the OMZ probably presents a refuge area for Humboldt squid.  Vetter et al. (2008) suggested that most mako/squid interactions probably happen when the Humboldts rise out of the OMZ to feed.  Perhaps most badass of all, Pacific makos are frequently covered in battle scars from the last moments of those tasty squid, which means the titanic battles between sperm whales and giant squid have a smaller, faster counterpart.

In conclusion, makos are voracious predators of voracious predators.  The only chink on the mako’s badassery is that they’re occasionally preyed upon by orcas, which you could read as “it takes an orca to take down a mako.”  When the cephalopds finally invade land and depose humanity, it will be because they were trying to escape from the sharks.