Just monkeying around? Hell, that's a face-eater on your trail little girl! Below: Found my macro lens ... 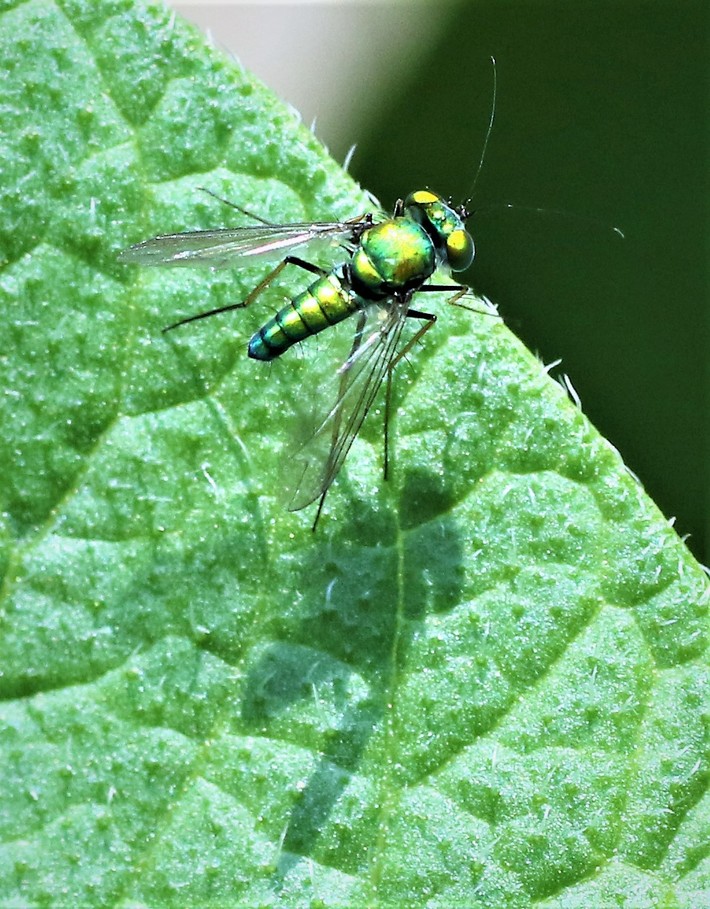 (Apologies if this blog is sloppy and typo-ridden. I'm quite busy but wanted to get some of this info out there.)

I’ll begin with a whole new regime of gator/slammer/chopper blues moving in from the south. Oh, please make this be good news for this fall. But I digress. These blues were big and bad-ass, per surfcasters who bested as many as a dozen at a pop, mid-Island north. Boats also found them, though less concentrated. While the blues aren’t going that crazy along the South Jetty, they’re actually competing with recent years for the best spring showing of big blues ever. Add to that an ongoing run of eater blues and it seems the biomass is kicking ass. Bait is still the way to go, though.

Where are all the fisherman on this pg? Just letting u all know that “Giant Blues “ are running in Brant Beach!

The striped bass showing is what might be called normal, though it is edging toward the mighty fine realm. I catch hell for repeatedly saying it, but this fishery is not hurting -- except on the trophy end of things. I can’t get behind these anticipated radical regulatory measures meant to get bigger bass back -- by over-favoring this top predatory species. It’s profoundly unfair to the rest of the fish in the sea.

In the same breath – and without being even slightly inconsistent – there is a pressing need to research why the success rates at primary striped bass spawning grounds have been so variable, often downwardly so. It’s going to come down to water chemistry more than angler harvesting.

As to the big boys moving onto the local scene, jumbo cownose sting rays are in the house. This somewhat early arrival of jumbo rays is putting a strain on surfcasters, literally trying to haul them in through the LBI suds.

The ones being taken seem to surpass the upper end of their natural growth parameters, set at  a maximum of three feet across. The big ones now in the surf are pushing four feet across, wingtip to wingtip. From the photos I’ve seen, these are cownose rays, though they could be a different breed.

It’s too early to say if we’ll be seeing winged fogbank-like arrivals of these mellow members of the shark family. Schools of these surface-swimmers can sport thousands of rays. One enthusiastic counter once pegged their number in the millions. I’ll go more scientific by saying there’s surely a shitload on ‘em.

These laidback rays only become dangerous when severely spooked, i.e. when hooked and dragged ashore or onto a boat deck. That’s when their stingers start swinging madly about.

It’s too early to say if we’ll be seeing winged fogbank-like arrival of these mellow members of the shark family. Schools of these surface-swimmers can sport thousands of rays. One enthusiastic counter once pegged their number in the millions. I’ll go more scientific by saying there’s surely a shitload on ‘em. 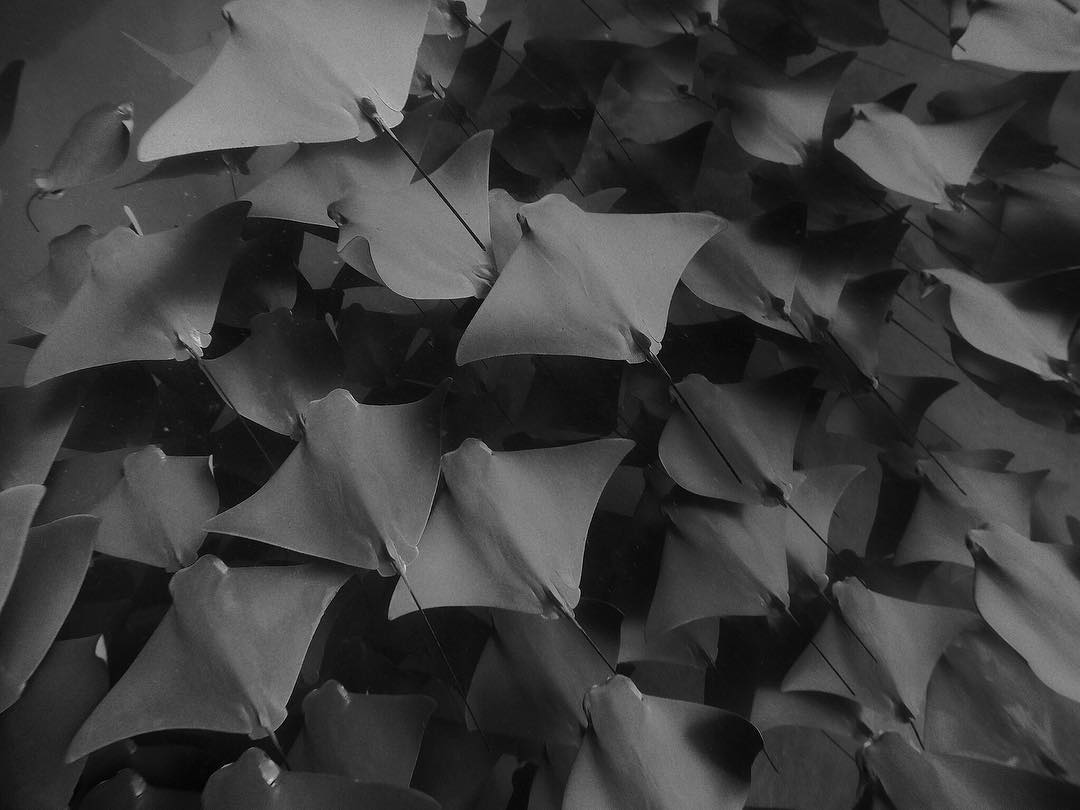 These laidback rays only become dangerous when severely spooked, i.e. when hooked and dragged ashore or onto a boat deck. That’s when stingers start swinging madly about. 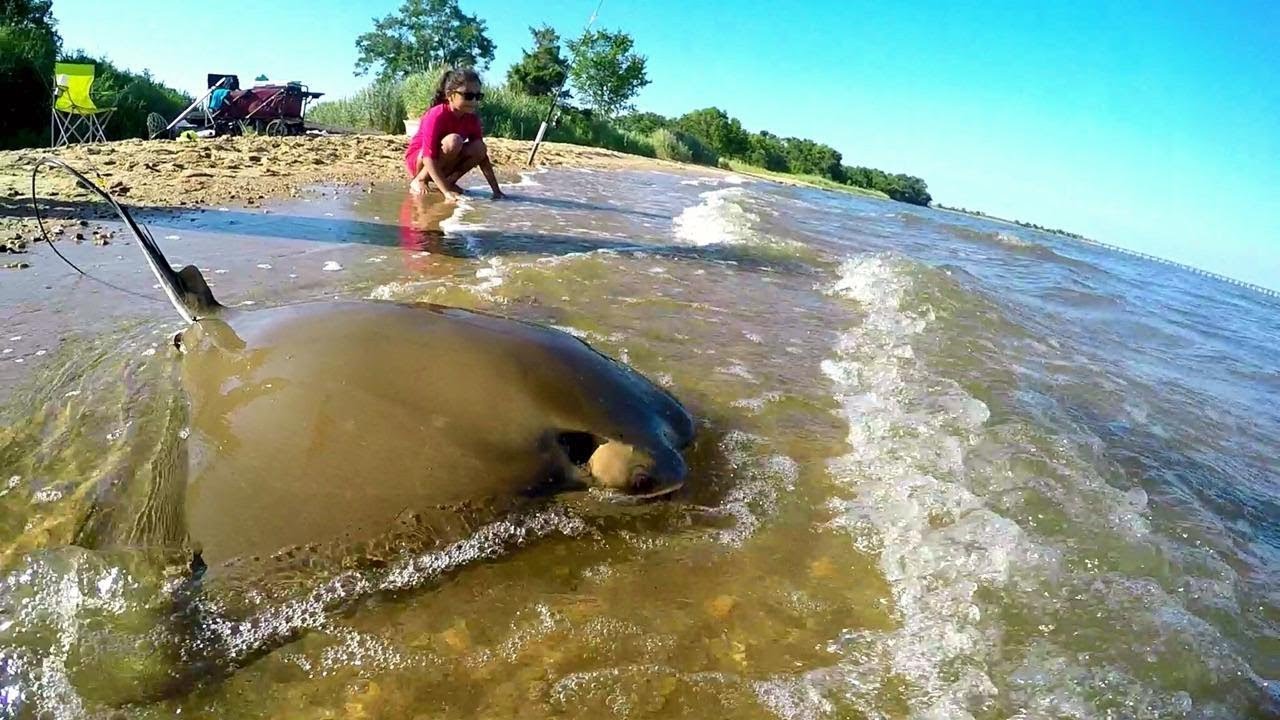 Each barb/spine/stinger/dermal denticle is covered in skin, internally enforced within by a rigid material called vasodentin, a strong cartilaginous material able to cut through flesh in a heartbeat. The bottoms of the barbs have two longitudinal grooves, running north to south. Within the grooves are venomous cells. When plunged into, say your leg, the skin breaks away and exposes the pain-bearing business part of the sting. Along with excruciating pain, the toxins can cause assorted symptoms, like nausea, diarrhea and headaches. Generally, though, ER visits are seldom needed, though post-sting infections are very common and do require a serious antibiotic regimen. In recent years – and in response to the tragic stingray-related death of Crocodile Hunter Steven Irwin – it is being highly recommended that any stingray puncture to the chest or abdomen be treated as a dire emergency.

For the multi-umpteenth time, I’ll alert that a stingray’s sting is not at the tip of the tail but way up near where the tail meets the body. Stepping on a landed ray's tail in an effort to subdue the sting neatly allows the creature to drive home its attitudinal point. 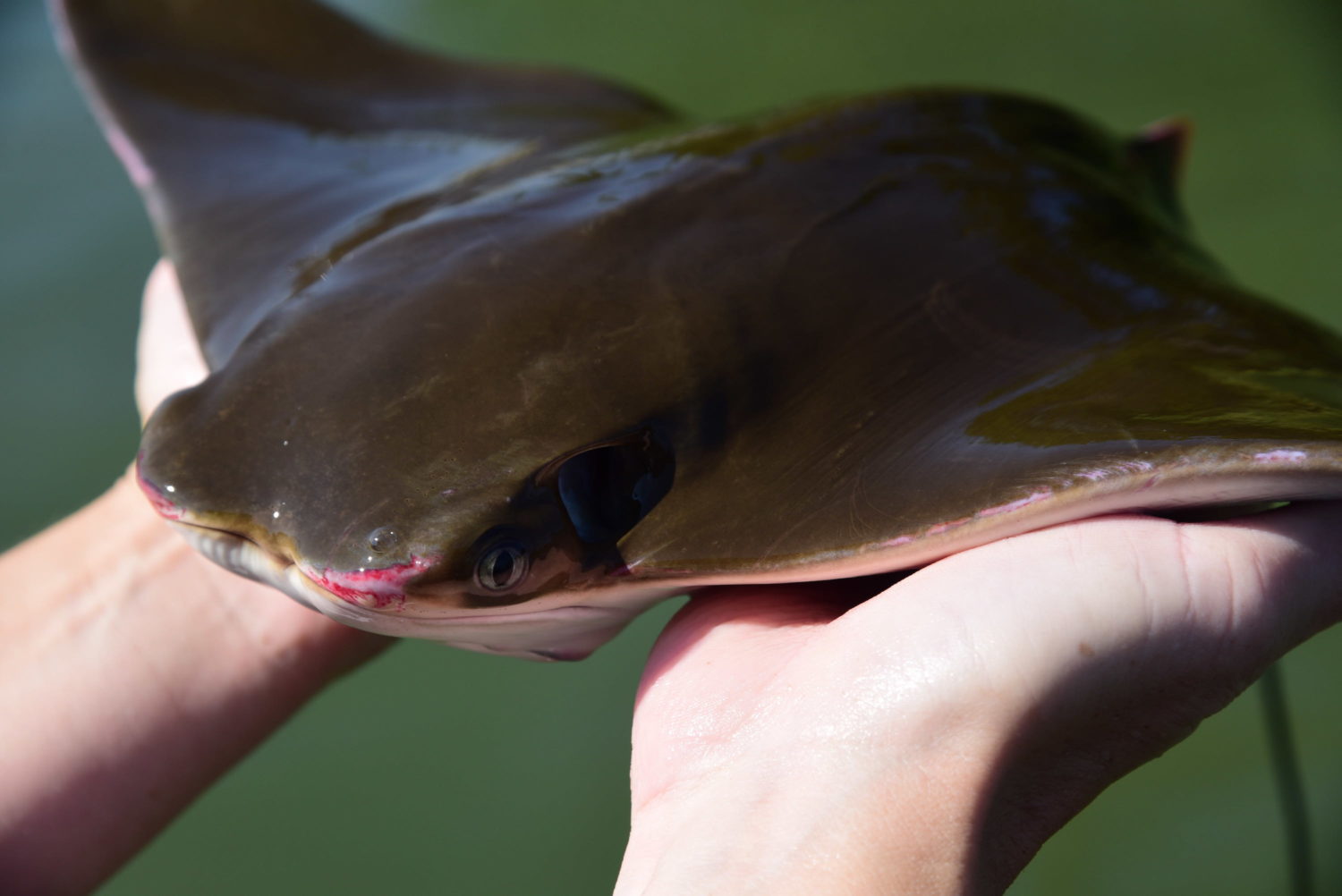 It should be noted that cownose rays are not bottom dwellers. Many ray stings in other parts of the world occur when bathers step on bottom-based types of rays. Again, to get a dose of cownose venom, you have to be in close contact with an enraged captive ray.

Per experts, where rays go so go sharks, which voraciously feed off these easy-target swimmers. I’m among many that depict rays as being pizzas with wings to the men in gray suits. Could that mean a higher shark threat for swimmers when rays are winging about? Not really – and not that there’s ever a huge shark threat to begin with. Logic dictates that sharks on the trail of rays are well fed.

Admittedly, a slew of ray-stalking sharks plying waters close to shore can make for numerous shoreline shark spottings/warnings, which thrill and repel beachgoers. It might just be a shark-showy summer for us should rays be thick inshore. That also means the famed top-finners might also be there for the bycatch hooking. I know of a few small brown sharks already caught in the surf. The coupe de grace is the sand tiger shark, among the toothiest fish known. The tiger shark is a strict catch-and-release … as in ASAP -- even a photoshoot can be deemed a citable offence.

Short and a few medium sized bass along the north jetty this AM and plenty of blues. Don I. had a 10+ blue that

woke him up out of his morning nap. Took a ride up along the beach looking for bunker but nothing to be seen. Ocean was 58.  WP

What an awesome morning with great people! They let me pull in this beauty. And we had a humpback whale pop up right in front of our boat#stripedbass

Another great day of fishing for Ed Stien and friends.

We will be running open boat trips the next two Sunday mornings, June 9 and 16.

Mixing it up between bay/inlet stripers, blues and fluke. Ocean is offering up a bountiful catch of seabass and Ling !

In the spring and summer months, you may find what appears to be sick, injured or orphaned wildlife. Fish and Wildlife urges you to leave young wildlife undisturbed. Every year, especially around this time, the lives of many young animals are disrupted. Well-intentioned people may attempt to 'save' these animals while most often the mother is nearby.

If you find a young fawn laying alone, leave it there, it is not abandoned. The mother comes back several times each day to nurse the fawn. If you've already picked the fawn up and brought it home - put it back. Even one or two days after removal from the wild, fawns can reunite with their mothers by returning them to where they were found. Adult deer spend much of the day feeding and exploring. Fawns that are not strong enough on their legs to keep up with the adults are left behind. Usually young fawns are quite safe because their color pattern and lack of scent help them to remain hidden until their mother's return.

Did you ever see one crossing the road?

If you are driving, pull over and park in a safe location! Next, carry the turtle across the road in the direction it was walking and carefully place it on the other side. The turtle has a purpose; help it reach its destination. If you touch a turtle, reptile or amphibian, wash your hands!

One coastal species that is particularly at risk is the diamondback terrapin, New Jersey’s only saltmarsh turtle. Summer brings more traffic to shore areas where these turtles live, increasing risk of strikes.

How to move a Snapping Turtle off the road: http://www.youtube.com/watch?v=Lgd_B6iKPxU

During the weekend of June 1st and June 2nd, Massachusetts Environmental Police conducted patrols in the greater Buzzards Bay area via land and water. Fishing activity was extremely heavy due to the amount of Black Sea Bass being caught in the area. Officers issued upwards of $3000.00 in fines for various fishing and boating safety violations. Fishing violations included possession of over the limit Black Sea Bass, possession of undersized Black Sea Bass, Striped Bass, Summer Flounder, and Tautog. Additionally, several violations were issued to individuals who did not possess a valid saltwater fishing license.