Wednesday, May 13, 2015: Winds are briskly out of the west, smoothing out the ocean

"Whadda ya got lead stuck in that sucker?"

Wednesday, May 13, 2015: Winds are briskly out of the west, smoothing out the ocean – and hopefully not lighting up the Pines. It’s bad out there, Dry as tumbleweed, with underbrush just itchin’ to go up hotter than a butane porch. Fortunately, so far today, fire departments have only had to deal with increasingly common mulch fires, see below.

The bluefish bite has quieted  by a scale or two ... although a similar slowdown happened ten days back and the blue gushed back in.

H.M. said it for many folks, "I think I've just about had it with bluefish."

Bluefish continue their siege! So much fun watching so many people have fun catching!!!!!‪

I see a very interesting, albeit thundery, angling weekend coming up. The heavy rain first forecasted has been heavily downgraded to scattered shower -- as I suspected when droughted conditions are in control.  If you're "breaking out the Evinrude" -- an odlen springtime expression we used when I was younger -- keep a severe eye on the sky.

As for what's catchin' -- and assuming the blues are backing down a bit -- there are very scattered bass in the suds. Those smaller fish are bait-oriented, though a keeper was taken on "a plug" yesterday, mid-Island (north of replen). Clams should do the trick.

Another very bulky blackdrum was taken near (not in) Little Egg Inlet. It was a solid 30 pounds. The hooker kept it, being a fan of the fillets. That's just fine. He also concurred with something I had written, that mid-sized drum are no more wormy than smaller ones. He added that he isn't wild about munching on what he called "monster" drum -- to him anything larger than the one he kept. He also added an educated word on conservation by mentioning that he never keeps "monsters' because they pass on the genetic trait for hugeness. Drum on, brother.

Bluefish have had a goodly number of blowfish in their bellies --  they swallow them whole ... and the can't quite figure out why they suddenly feel so full. When the blowfish deflate, the bluefish's stomach acids do quite a number, as seen by the ghoulishly ghastly look of partially-digested blowfish -- which I had some pictures of, in here, a week or so back.

Two at a time

SMOKIN’ MULCH: Out of both necessity and personal interest, I’m oft tuned to my police, fire and EMT scanner. Along with noticing how frantic things often happen in bursts and bunches, I’m often amazed at the frequency of some of the odder emergency calls, aka hit outs, as in, “I’m hitting out fire and EMTS.”

When I’m talking odd I’m ignoring the utterly strange, like the recent midday, armed robbery, by two low-pants gangbanger African Americans driving a big urbanized Crown Vic car – in frickin’ Barnegat! Not only did their high-caliber gig stand out like a sore thumb but a black sore thumb to boot.

One of the odder hit-outs recently has been for mulch fires, as in gardens, walkways and even entire yards. I kid you not. Now, on an almost daily basis, wooden and synthetic mulches are igniting, to the point a professional dousing by the nearest fire department is in order.

This fire threat is right up our alley on LBI, where folks – including absentee homeowners -- aren’t big on picking weeds. 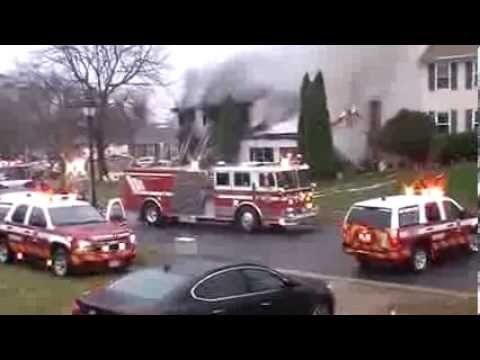 Most often the mulch-ignition culprits are flicked still-lit cigarettes. Mulch mixes well with smoldering tobacco. The glowing embers from tobacco easily pass into the mulch material, then, when winds honk, the smoke bomb begins. And it can quickly turn to flames, as the mulched playground at the LBI School found out the hard way not that long ago when smoldering mulch led to nearby wooden playground structures going up in flames. With the dryness out there now, there were already two mulch fires just this morning -- reported on the scanner.

Starting today, May 13th speed limits will be lowered on Long Beach Blvd. Traffic lights will go on May 18th. Please drive carefully.

I show dogs that miss, so here's one that nails it ... Imagine these along Rte. 72?

Even a friendly face can spook the hell outta you when kayaking ... as the petrified gal in this kayak will attest.

Please keep an eye open ... as Glenn Reitinger did here, in his driveway. Keep your eyes open out there... Some terrapin may need your help.