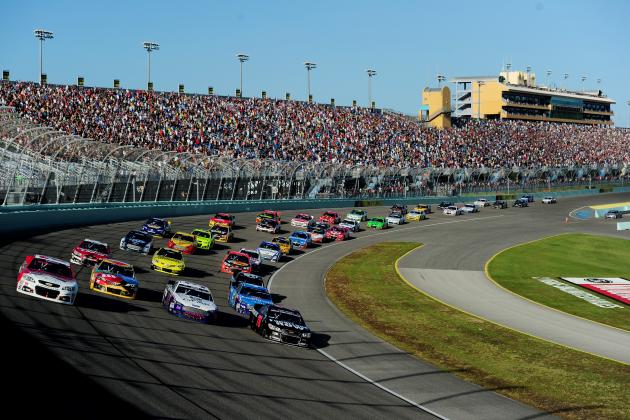 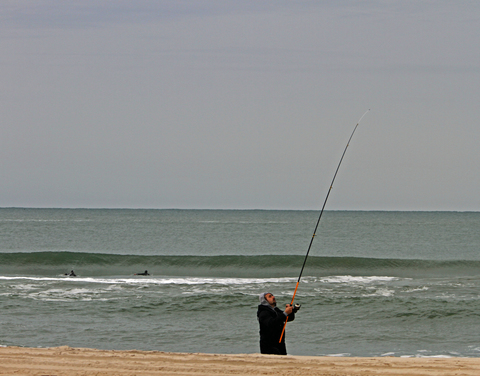 OK, so it’s chilly, overcast with some passing showers but those are good things when hitting the beach (or maybe boat) to go bassing. Technically, it’s called subdued lighting but it doesn’t subdue the bite, In fact, I think it allows for better surf fishing throughout the day. That particularly applies to plugging.

To be sure, the bunker chunks are flying off the beach. Outside of those passing showers, the beach is an easy sit for buggyists and walk-ons alike. In fact, there’s a damn decent turnout for a late November weekend. As to the hooking, I haven’t heard of much this a.m. Some church folks talked of bass on boats. Minimal surf chatter.

Below: You’ll see there are some moderate stripers in the suds. Bait is capturing much of the action.

PLUGGING POWER: I realize this column is oft plugging heavy but by my thinking that’s one of the most creative sectors of angling, based on its complex and varied casting/retrieving strategies -- and, even more, on the amazing upswing in plug creations. 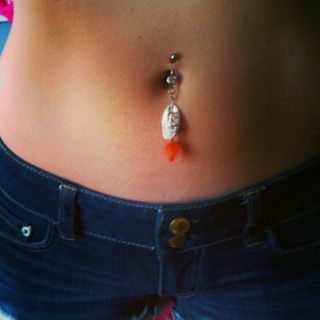 From commercial artificials (by big-name companies experimenting with new designs) to the fantastic flow of highly-productive homemade offerings, plugging has never been more alive. Then, when you add in teasers and – another obsession of mine – jigs, it’s a blast just casting regardless of any accompanying catching. And, yes, I have to get my blasts by merely casting since my actually catching isn’t always up to snuff due my genetic inability to stay put long enough to find the perfect lure for a given condition setting.

PLUGS A- GROW: Speaking of homemade, yesterday I did some mainland time and checked out a private section of cedar woods I keep in reserve for when I retire – which, based on current saving, will be on or about May of 2094.

Upon my having time to carve plugs, this area of cedar growth has a huge number of small, never-made-it cedars. They gave up the sap ghost long go, for whatever reason. Many are blowdowns on the ground, seasoning, but quite a few are still standing, even though they passed away years and years ago. Cedar is rugged enough but allow them to stand upright, albeit deceased, they get baked in the summer and frozen in the winter, leaving a wood that will stand up to saltwater like it’s nothing. 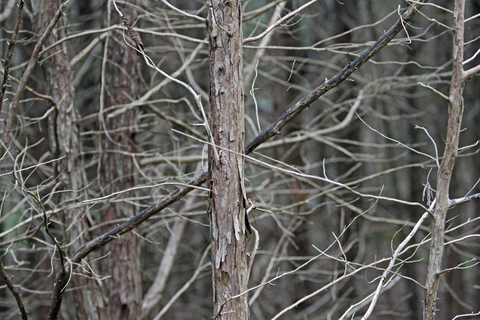 Below: The makings of the daddy of all lures: 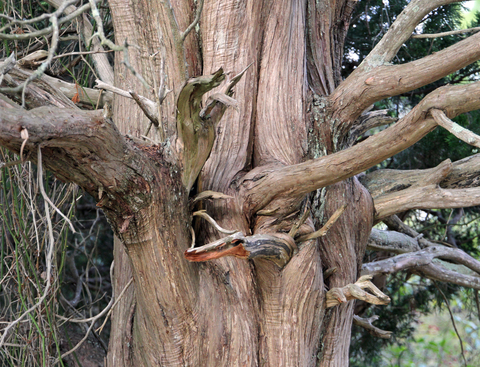 Anyway, these small cedars-in-seasoning are the exact width and roundness needed for saltwater plugs. Saves a ton of whittling, i.e. lathing. They’re like natural six-foot (or longer) dowels, enrobed in easily removed bark.

Despite their smaller size, these cedars often have super hard, deep-red heartwood, which is ideal for drilling. It also adds amazing coloring if you want to go au natural. 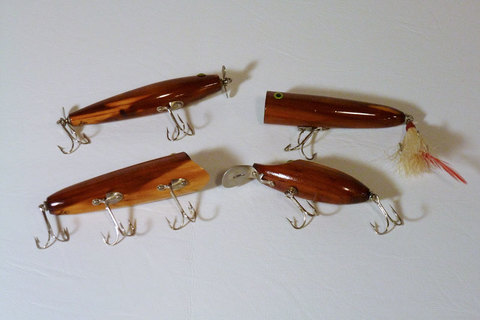 This seasoned cedar is so solid you can go with just screw eyes (and finishing washers) for the hooks, no need to use a through-and-through, head-to-tail wire. Of course, a good shellacking adds further hardening.

It was a dankish late-fall woods walk until I came across these somewhat rare, eye-awakeners: the bursting seed pods of a plant with the really cool name of eastern wahoo; the "burning bush" of legend. The wahoo's bark was a favorite "purgative' of Native Americans and early pioneers. I sorta skipped the "purgative" part but gladly took in the sudden blast of brightness. 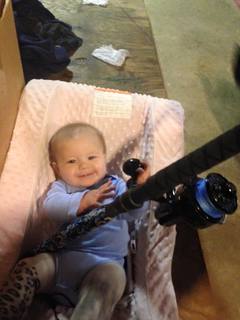 That's what it's all about! 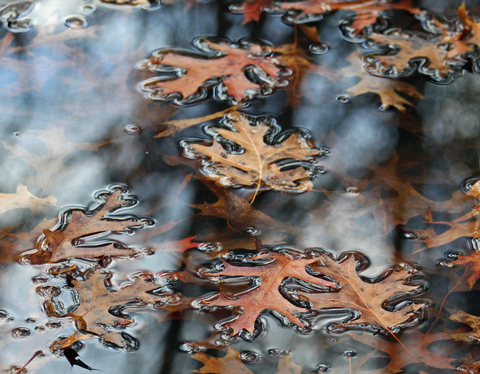