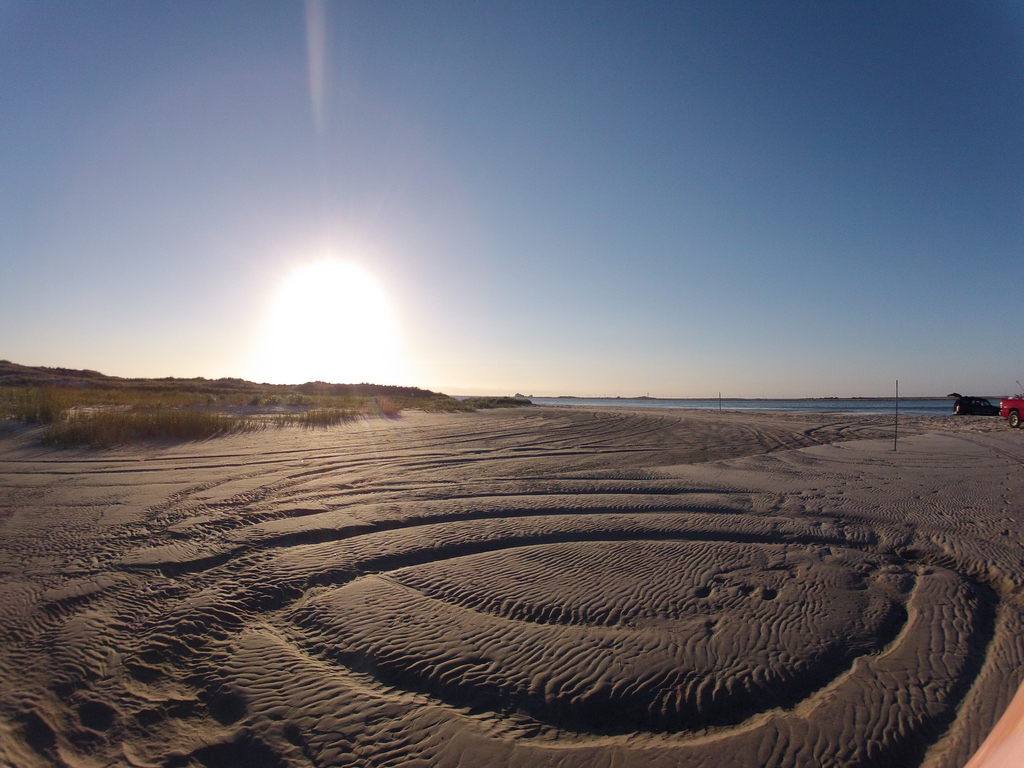 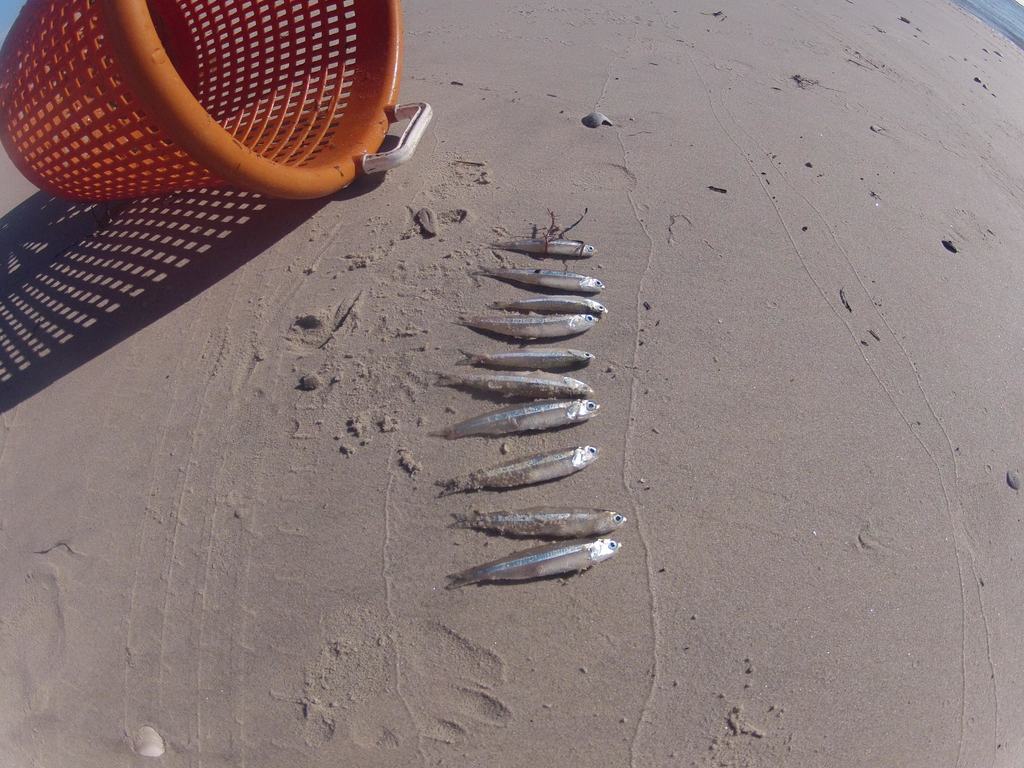 Ever wonder how to tell a spearing (Atlantic silversides) from a rainfish (bay anchovy)??
Yes, some folks lose sleep over it. Well, throw away your Sominax and check out this video: http://youtu.be/M18qr3MlIL8

And just to show I’m not one of those total Suzie Brightnose types, I’m already fretting that  this perfection is a sneaky build-up to some retaliatory sky things further down the line -- hopefully not on December 21.

Even more bass are showing, front beach and from boats. This seems to be a larger one: Tomorrow is the famed 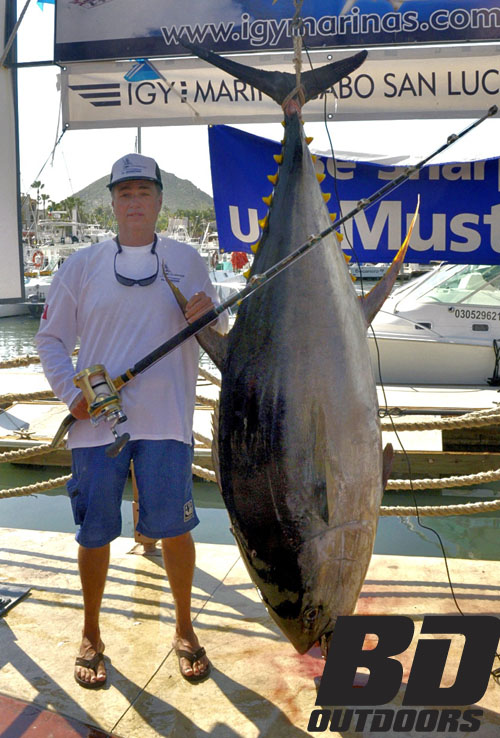 THE STORY BEHIND THE 'MILLION-DOLLAR' TUNA

Guy Yocom, a 55-year-old businessman from Dana Point, California, built a successful contracting business in Norco by applying a simple philosophy: “By paying attention to details, small ideas could result in huge accomplishments.”

It's an ideal he applies to everything, even fishing.

When Mustad's Hook A Million promotion was announced in October 2011, the possibilities swirled in Yocom's head and a plan began to take shape. And if all things go his way, the giant yellowfin tuna he just caught in Cabo will sneak in before the Hook A Million promo comes to an end.

When the crew on Tenacious caught an estimated 427.9-pound yellowfin last April off of Puerto Vallarta, Mexico, Yocom was encouraged. The giant tuna caught on Tenacious could have threatened the 405-pound current IGFA world caught by Mike Livingston of Sunland, California, in December 2010. The giant yellowfin caught on Tenacious was never considered for a world record because the anglers said that two men had touched the rod. But Yocom figured that if there's a fish of that size out there, there are bound to be more.

With his 61-foot Viking sportfisher aptly named the El Suertudo (Spanish for The Lucky Guy) all geared up, Yocom set out to best the current IGFA record and win the $1 million prize.

The boat has been based in Cabo San Lucas marina since he purchased it more than four years ago and has been kept in immaculate condition by Capt. Greg Di Stefano, 42, from San Clemente and mate Oswaldo “Balin” Ortega of Cabo San Lucas. El Suertudo is always ready to roll, so the crew can head out fishing at a moment's notice.

Before every trip the crew inspects all of the tackle and equipment, drags are tested and retested. The crew even sent line samples to Jack Vitek, the World Records Coordinator of the International Game Fish Association in Dania Beach, Florida, before they ever left the dock in search of giant yellowfin.

With a big cow under their belt, they knew that if the right fish came along, everything was in place and they were ready to meet the challenge.

HOW IT WENT DOWN

This week, Guy, an accomplished tournament angler, and his crew decided to take advantage of a so-so weather window and headed out fishing. Each time they found some porpoise, they positioned the boat in front of the school and set out kites, rigged with caballito, green jacks, and dead flying fish. When that failed, they tried drifting with chunk bait.

Ultimately they ended up 180 miles south of Cabo where they landed a 200-pound yellowfin, as well as some smaller tuna.

Around 10:45 a.m. on Tuesday, September 18, as they were drifting with chunk bait, a behemoth tuna inhaled a submerged bait. Yocom shoved the drag lever on the Shimano Tiagra reel to full strike and the 100-pound test Jerry Brown Line One Hollow Core Spectra matched with Yo-Zuri 200-pound fluorocarbon leader and a Mustad hook took hold.

This was not El Suertudo's first rodeo.

Yocom got in his Black Magic fighting belt and settled into the fight — pumping and winding as hard as he could with the Melton stand-up rod. Remarkably, in what seemed like mere minutes, the crew could see the color of the huge animal through the water. As the monster broke the surface, the crew got ready with IGFA-approved gaffs. They sunk the gaffs in the 7½-foot long tuna and ended the 50-minute struggle.

How's that for teamwork? Landing a fish of that size in under an hour is just incredible.

With the fish secured onboard, Captain Greg pointed the boat north and sped for their homeport. Tape measures came out and the fish measured slightly larger than Livingston's 405-pounder at 88 x 63.5 inches, clearly topping Yocom's personal best by a couple hundred pounds.

Long before El Suertudo pulled into the Cabo San Lucas harbor at 8 a.m. on Wednesday morning, rumors had already begun to fly around town. Minerva Saenz, the IGFA representative for Los Cabos, had been alerted and met the boat to assist and supervise the weigh-in.

Captain Greg was full of compliments for Minerva's assistance. Coming in exhausted, he was pleased to see the IGFA rep waiting to help him with all of the details that he needed to know to make certain nothing was overlooked in the qualifying of the world-record fish.

"She was outstanding, over-the-top! We felt reassured to find her at the dock," Yocom said.

Along with Minerva, a large crowd looked on as the fish was wrestled to the scale.

The fish was weighed on two different scales because one of the scales was dropped. It weighed 421.5 pounds on one, and 427 pounds on the other. The scales were immediately sent to the United States to have the certification confirmed and to verify which weight was accurate. The certification should be available by this coming week at the earliest. Regardless, either of these weights will make it the largest weighed yellowfin tuna ever caught on rod and reel — and a new potential new IGFA world record. Since he caught the fish on a Mustad hook, the big tuna would also qualify for the Mustad's “Hook a Million” contest.

“We heard about the incredible catch yesterday. What a fish!” said Mustad's sales manager Jeff Pierce. “It's always exciting to get word of a potential record fish that could result in a $1,000,000 payout. We will see how this all plays out as more information becomes available."

Mustad's advertising agency, Scott Advertising, is cross-referencing the angler entry database to see if Yocom was registered for the Hook a Million promotion. Anglers must register at least 24 hours before they begin fishing.

This fish couldn't have come at a better time either, the Mustad promotion ends in less than two weeks, on September 30, 2012.

Yocom, with one year to accomplish a task, stuck to his philosophy that if you pay attention to the details, you can accomplish huge results — the key word being huge. Yocom's accomplishment may very well earn him a world record certificate and a payday worth $1,000,000.

"Guy Yocom is an inspiration to anglers in his ability to understand and pursue his quest for a new world record. While we await the outcome, it is a reminder to all weigh stations that keeping your scales certified is an important responsibility," said IGFA Trustee Michael Farrior.