Friday, September 19, 2014: Better to have a crapped day today than tomorrow.

Friday, September 19, 2014: Better to have a crapped day today than tomorrow.

Today certainly had a bit of an attitude. Steady 20 mph northeast winds were anything but user-friendly for boat fishing or surfcasting, even at the south tip. Oh, I was there -- and I’m sporting one of those second-degree windblown face looks, kimosabe. In fact, I spent a good chunk of the morning wading around in waist-deep water trying to figure out where have all the mullet gone. And, no, I’m not yet in the chestwader mode; not with water temps still 70 and up. I don’t put on the neoprene until there’s frost on the fiddler crabs.

Back to the mullet, I finally got into them pretty good (around 1-ish) but only for ten frickin’ minutes, then zippo.

I’ve seen too many mullet season play the one-and-done game, i.e. one spurt (maybe a week to ten days) and sayonara. Today’s mullet were not just hard to find but showing up small and lean. Mercifully, they weren't those aggravatingly tiny ones that are so small they get fouled in the 3/8-inch-mesh net. Those mini-mullet are common during a normal mullet year. Todays were small enough that it took a baker’s dozen, plus one, to make a decent looking bag’s worth. Bluefishing remains the talk of the entire coastline. They're mainly those one- to –two-pounders that are thin as rails. However, I got sent a couple photos of serious choppers. However even those fish are totally belly-less – as in the distended bellies they need to be taking on to survive the winter out at sea – where huge numbers of them don’t make it. I still haven’t gotten a good explanations why such a tough fish gets just about wiped out every winter, though I’m guessing it has to do with their sky-high metabolism that burns through fall fat in nothing flat. Apparently there isn’t much for them to dine on where they overwinter. It’s also likely something dines on them -- namely dolphin, sharks and even whales -- when they’re weakened by winter.

By the by, it’s always best to take the brownish lateral line our of bluefish fillets. Make sure to take the dark meat out when first cleaning and not after storage or cooking. Removing it fresh prevents the fats from the lateral line from essentially leaking into the adjacent light meat during cooking.

The spearing run is very thick, always a great sign and surely the reason for the bluefish action -- far more than the mullet. Mullet simply take too much energy for a bluefish to catch. It’s called the metabolic budget and, just like a money budget, spending too much for too little will kill ya in the end.

Few bass to speak of. That will change very soon, especially when the water temps take a dip.

The winds should fall off quickly tonight, making for a real fine tomorrow. The hurricane swell has petered out so wave action and related beach overwash is minimal. Holgate is still loose. Just make sure to stay in other tracks. Always the surest and safest way to work a beach in a buggy.

I’m still lovin’ my pencil poppers. It’s not like I’m not trying all sorts of other plugs but the big-ass pencils simply draw way more action, far more than even standard poppers. It seems to be the way the plug’s heavier butt-end sinks deeper when the plug is slowed or stopped. I am due to switch out the rear treble. It’s getting worked, mainly during dehooking – when I twist it every which-away to get the fish off. I like using Gamakatsu trebles, especially the 2X Red Round. These are single-season hooks – they go south pretty quickly from corrosion – but, when new, they are ruthlessly sharp.

(A quick look at Gama trebles):

Does anyone recognize anyone here? or where it's taken? Possibly Barnegat Light 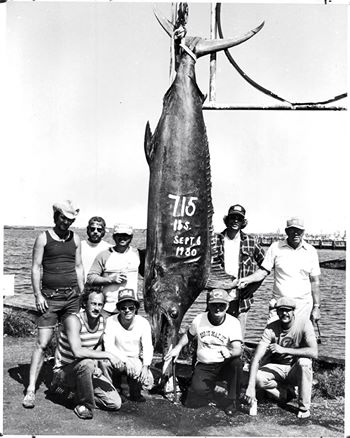 Fished a double-overnighter earlier in the week. Here's a sunset from the way out and a couple of a whale shark that hung around a long time.

The fishing was phenomenal. We caught 2 bigeyes, 3 longfins, 45 yellowfins and a dozen mahis. Kept a few mahis, both of the bigeyes, some yellowfins and released the rest.

8 hrs ·
Nice sunrise on Atlantic Beach this morning - woke up my friend here and brought him home for dinner with the family!

The Seafood Harvesters of America have major concerns about the re-allocation language in Florida Sen. Marco Rubio bill for Magnuson reauthorization.

A highlight of the legislation--which has been endorsed by the Gulf Seafood Institute who had a hand in crafting the bill--seeks to ensure commercial, charter and recreational fishing interests are represented among the leadership of the councils.  But the Bill also includes a provision sought by recreational groups in the Gulf to force reallocations of fish from commercial to recreational interests through a five to eight year review period.

The commercial groups have argued that such a review would make loans almost impossible to get, as banks could not trust that quota allocations would be stable.

“While we appreciate Senator Rubio’s support of increased funding for stock assessments, surveys and data collection, the Harvesters will continue championing a final bill that ensures shared accountability for commercial and recreational fishermen to sustain America’s seafood supply.  The Harvesters greatest concern remains a proposal that would force the South Atlantic and Gulf Regional Fishery Management Councils to review allocations based on arbitrary political deadlines," said the Harvesters' Vice President and Board member John Schmidt and Board Member Jack Cox in a joint statement. "Reallocating fishery resources to recreational users who do not adhere to the same scientific monitoring and accountability requirements as commercial fishermen, could destabilize commercial fisheries that are economically critical to coastal communities all across the country.  Before rushing a bill through Congress, we should take the time to get it right.”

What happened in the Gulf of Mexico over red snapper was that the commerical groups took pains to stay within the management guidelines, and contributed to the rebuilding of the stock, while the recreational sector consistently overfished.  With the stock now recovering, the council was considering rewarding the poor record of the recreational sector by taking away fish from the commercial side.

The argument of the Seafood Harvesters is that before any allocations are discussed, recreational groups have to have the same accountability as the commercial harvesters do.  Without that accountability, transfers simply undermine conservation quotas.

A coalition of grocers and retailers and the seafood industry’s main trade association say a proposed law in California that would change the names under which seafood is sold in an effort to combat fraud is misguided and won’t achieve its objective.

The bill, which was approved by the California State Legislature and only needs the signature of Gov. Jerry Brown to become law, would mandate all seafood sold in the state be listed by its common name as well as its market name. Seafood in the state currently is sold using its market name.


Some examples of how the bill would affect labeling include herring being listed as Ilisha, Chilean seabass being listed as Patagonian toothfish and shrimp having to be called by names such as roshna prawn, jack knife prawn or caramote prawn.


Supporters of the measure, including the Monterey Bay Aquarium and the environmental activist group Oceana, say the change will address the problem of seafood mislabeling, which has been found to be widespread throughout the country. Oceana has conducted DNA tests on seafood purchased around the country between 2010 and 2012, and found 33% of its samples were mislabeled, with the number rising to 38% from stores and restaurants in Northern California and 52% in Southern California.


The bill also would provide more detailed information to consumers who need to know the specific species to avoid allergies or to avoid fish with excessive levels of mercury, or because they want to avoid fish from areas they consider overfished or environmentally vulnerable, said Ashley Blacow, Pacific policy and communications manager at Oceana.


“The market name refers to many species and actually obscures the identity of seafood, ” Ms. Blacow said. “But if provided the common name, consumers are able to make more informed purchasing decisions for their personal health…It means some allergen-sensitive consumers could enjoy some species of seafood while avoiding other species that could cause them problems. ”


As long as the common name is used, nothing in the bill prevents seafood sellers from using the market name to help people who are familiar with those terms, Ms. Blacow said. “Some people are more familiar with the market name but there are consumers who are trying to make very conscientious decisions for their own health or ocean sustainability reasons, so it’s critical those consumers who are looking for that information can find it. ”


Opponents say the measure will only cause confusion as it will put California at odds with the laws of the federal government and the other 49 states. As an example, mahi mahi would also have to be labeled as dolphinfish, its common name. “Our customers, who know and are accustomed to seeing ‘mahi mahi’ would think that they are buying dolphin meat, which will most certainly result in confusion, ” said a letter sent to the governor by the California Grocers Association, California Retailers Association, National Retail Federation and the Retail Industry Leaders Association.


The retailers say federal law already prohibits mislabeling of seafood, and mandates seafood labels be accurate and truthful. They say the U. S. Food and Drug Administration has created the Seafood List, which says the industry can call a fish by its market name or its common name. The law would also create additional regulatory burdens and likely lead to an increase in the price of seafood, they said.


The retailer groups say they supported a labeling bill in Washington state signed into law in May 2013 that said the common name could be either the acceptable market name or common name as provided in the FDA’s Seafood List. They say they must oppose the California measure because it “runs afoul of this state and industry supported approach. ”


The main U. S. seafood industry trade association, the National Fisheries Institute, said if approved the bill will add nearly 1,850 new common names to the vernacular and to menus. “Is California cracking down on seafood fraud or muddying the water further? We would support efforts to ensure stronger enforcement but this bill does no such thing, ” an NFI spokesman said in an email.


Gov. Brown hasn’t given any indication of whether he will sign the bill, Ms. Blacow said.

BEAUTY OF THE BAY: A SHELLFISH SOIREE


Tasting & Film Fundraiser at the LBIF

Enjoy a tasting of local oysters and clams, a viewing of the film Shellshocked, a shellfish-related art auction, and a panel with local shellfish and Bay experts. Sponsored by The Old Causeway with support from ReClam the Bay, joined by Tuckerton Seaport, and more. Master shuckers in the house! Rich discussion about our beautiful bay! All proceeds to benefit the LBIF's mission of engaging the local and regional community in the arts and sciences.