Advisory: Holgate refuge beaches will be closed to buggying tomorrow at noon -- and until further notice. This is storm-based. See below for more Holgate stuff.

They won't have anything on us ... Friday, September 02, 2016: Weather reports are raining down, as is the modern trend during storm-watching times.

My job of pre-predicting the event is done. I, like most LBI folks, will now sit back and watch what the former Cat-1 Hurricane Hermine drags in, hitting us as a medium-sized tropical storm, but carrying the troubling distinction of being a hanger-on, unlike years of fast-moving system. TS Hermine’s effects will be blowharding clear into mid-next week.

As to the worst winds, they’ll toy with 50 mph NE to NNE on Sunday, but will still clock in at near 45 mph on Monday, though subtly shifting to out of the direct N, which is a more forgiving erosional direction for NE-to-SW lying LBI.

Rains might noit be up to TS snuff. There are already signs of greatly diminished rain amounts by the time the skies open up here, mainly Sunday. That in no way rules out street flooding, via bay backwash up the Island's sewers. A load's worth of extra ocean water will be blown in when the winds are cranking NE. That water will stay pinned in, meaning a potential for three days straight of road-covering twice a day by bay water. That it why a lingering system sucks. In many a tropical system, NE winds are rapidly followed by absolutely howling west winds, as a system move rapidly straight out to sea. As noted, that does not look likely at all.

NOTE: There could be some doable waveriding by Monday in the vicinity of what will be a home-again Wooden Jetty in Holgate.

CHECK IT OUT!!!: Which brings me to what I peg as the eye-opener of this storm: beach and dune erosion. But this won’t be your run-of-the-nor’easter type of side-ass erosion. This will be a whole new sight to behold, as a never overly-impressed-by-mankind ocean meets and greedily greets miles and miles of replenishment. Remember, this is the first significant post-replenishment storm for Loveladies, North Beach, and, biggest of all, from the south Brant Beach border all the way to Holgate. I probably shouldn’t be as excited as I am about this but wait until you see the height of some of the erosion escarpments (cut-aways), as the ocean overwashes the beaches and goes ravenous on the newly placed dunes. Those famed post-storm cliffs could be two stories high in some areas -- offering sheer drop-offs of historic proportions. And quite the sight to behold – without getting too close to the edge. I’m serious about keeping a distance. There could be some body-jarring over-the-edge dangers.

Don’t misread this as suggesting that some oceanfront houses might be threatened. That ain’t happening! Of course, had the sand not been placed there?

Then comes the fixes, which will begin with towns mechanically plow-patching the worst areas. At the same time, there is so much sand in the system that there could be a natural rebuild of impressive proportions. Nonetheless, Army Corps will do an appraisal and then …

This begs a guess at being able to drive the beaches any time soon. I fear not for many beachfront areas, except Holgate which has weather this all become and will be ready for wheels by next week.

Holgate Happening: It has been great buggying and beach hiking from just past the parking lot all the way to the end. It's a bit skinny going all the around to the back cut, though makeable.  Sand is firm, even doable at 22 psi, when staying in existing tracks. Steady birdplay west end of the Rip. No fish to be caught, though.

Fishing has been slow, though fluke and kingfish are showing.

I do not see this storm as ruining entry to Holgate but there could be some nasty sand relocating, leaving exposed roots and such, i.e. Dead Forest zones.  The Holgate Lake, near the entrance, could become troublesome, post-storm -- or not. there's no guessing since it has never existing before. Here's how it loooked today. 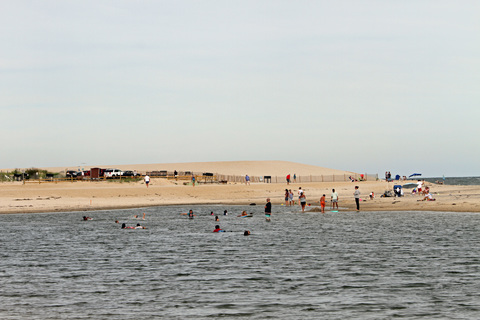 PWC in trouble ... then not so much. (Shaky video. I was multitasking ... as you can hear. And make that "Disabled", please." ) A disabled PWC with its pilot waving arms for help inside the Holgate Rip got a big response from a load of us down there today. We called in the cavalry. The BHVFD hit out an alarm, sending a rescue truck and crew all the way down to the far South End. The PWC’er was helped out by the arriving vessel seen here, which hauled it back to port. Much thanks to all the responders.

Back Bay Grand Slam of fluke, striped bass, bluefish and drum roll....weakfish! all before 9 AM! Great way to start the holiday weekend....