Friday, October 31, 2014: Some last-minute angling being done as a really nasty little northeast-wind storm system is about to smack the weekend to hell and back. Face it, it’s going to be a pisser tomorrow – the favorite angling day for visitors and nine-to-five locals alike. Kiss it goodbye. Oddly, the heaviest blow will come after the winds swing around to the WNW by Sunday. Gusts will easily top 40 mph. That will be OK for surfcasters but a positive no-go for boat fishermen – who are out today in good numbers hoping to salvage at least a day’s worth of “weekend” angling. Ocean fishing off IBSP seems to be rockin’ it. . 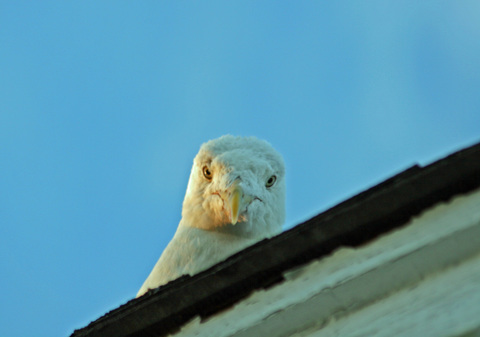 The blow won’t hurt bassing over-all -- not that there’s much to hurt. I’m still wearing shorts while fishing – it takes some serious cold to get me into chest waders -- and believe me the ocean is nothing that even resembles chilly. However, the inlet now has a mid-50s feel to it. Any rain tomorrow will keep the bay real cool. 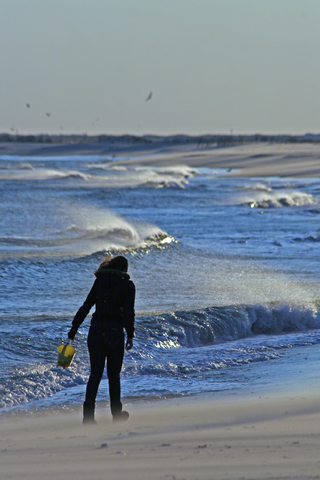 And, yes, I’m trying my hardest to spin a positive feel upon what continues to be a piss-poor fall surf fishery, though I had another small bass yesterday at the back-cut of Holgate, using a white/transparent Sassy Shad. That fish was a one-hander – meaning I could hold it by wrapping my hand around its body when dehooking. That comes out to maybe a 20-incher. I hate to remind folk but we go back to short-assed days again beginning twixt Saturday and Sunday this weekend, when we fall back an hour. One less hour of bar time for you partiers – and near darkness for nine-to-fivers when getting outta work. Of course, you sunrise folks – George-o and the boys – there’s actually a little more morning light.

I’ve gotten so desperate for fish that I’m pulling out the big plugging guns, beginning by tying on a beloved vintage smooth-sided 02 Redfin – a lure that has such magic tints and shading that it catches fish even when there aren’t fish around. It’s that good.

Take a second to check out this famed plug. I had to videotape it in my office to be safe. Outdoors, fish come crashing out of nowhere to grab it. It’s that good.

By the by, I’m always in the market for 02 redfins if any of yinz own some dupes (duplicate) you’ll part with. Smooth or rough sides, make no never mind to me. I’m not wild about tiny ones though. As with all vintage plugs, condition (and size) matters.

Buggy banter: The south end of Brant Beach (past the replen area) has gotten loose and chewed up. I actually had to down-air a bit to get through, especially the area off Cop Shop (LBT building). Township dozer has been working street end. This can sometimes make the beach sand looser -- in its wake.

I'm still looking for help and info on these stalwart sailors. Anyone you know??????

In my weekly SandPaper column I mentioned the two sturgeon that washed up right before Sandy hit ... 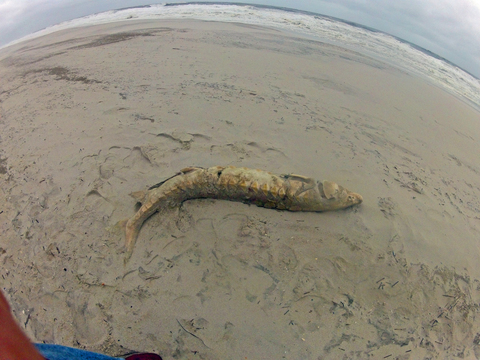 I have to make an amazed mention of a 3-foot Atlantic sturgeon secondarily caught in the surf of IBSP last week. Talk about a hook-and-line rarity.

While a sturgeon is a strictly protected, “no target” fish species, you apparently can’t stop one from taking a baited hook.

The Island Beach surf-caught sturgeon was photo’d and quickly released. Being a very tough fish, I’m sure it fared just fine on what was probably a short migratory journey out to sea – though some adult sturgeon do an incoming fall spawning run into rivers.

I tried researching this bizarre species and came up short. There’s still a whole lot to learn about this primitive fish, which likely has kept the same look for hundreds of millions of years. By the by, not long ago some of our BL commercial fishermen helped collect data regarding the movement of Atlantic sturgeon.

As with most things, I have some oddness to offer. For decades on end I had never seen a single sturgeon wash up on the sands of LBI. Then, within a three-day period prior to Sandy hitting, two of them washed ashore, mid-Island. One might conjure up some spiritual significance between sturgeon wash-ins and pending cataclysms. For others, such mystical meanderings border on nonsense. Personally, I’ve come across amazing things on those wild and woolly nonsense borders. I’m not kickin’ anything out of possibility’s realm. If sturgeon start washing ashore, I’m stocking up on batteries, the life blood of survival – as I learned the hard way.

That said, I’m more inclined to believe the sturgeon/Sandy connection was a mixture of coincidence and conservation. Through strict protective measures, there are (should be) more and more sturgeon a-swim out there. Admittedly, many are meeting untimely ends, often due to mankind’s intended and unintended entrapments. Still, the sturgeon population should be on the upswing. It’s a good sign to see a few being caught and gently released.

Amazing day out on the water