Friday, October 19, 2018: It should be a swell weekend for jetty and surf fishing -- providing you’re not over anxious to

Friday, October 19, 2018: It should be a swell weekend for jetty and surf fishing -- providing you’re not over anxious to get your hands all slimy from unhooking fish. I spent a goodly chunk of day plugging and jigging. I came up with an el zero. I talked with a few bait fishermen either de-baited by crabs (when using worms) or tiny blues. The ocean reads mid-60s, though the upper end of same, i.e. 66 and 67. Bay has areas of 60-degree water.

Taking in boat reports, it seems to be an amazing run of false albies, some on them jumbos. It makes for amazing fights on light or medium gear. I once got one from a kayak, about half a mile from the beach and it pulled me east to where I spent the rest of afternoon paddling back. Fun, though.

This dead flat ocean/surf might bring some albies in close enough to nab one from the beach. If after them, cast far and retrieve as fast as a spinning reel will allow. It can be problematic if you hookup shortly after the cast hits the water. An albie run can empty a reel in short order. I'll be bringing a fast action surf rod with larger reel. It can cast a mile, though it's tough on the arm after a few casts. See https://www.onthewater.com/how-to-catch-bonito-and-albies-from-shore. 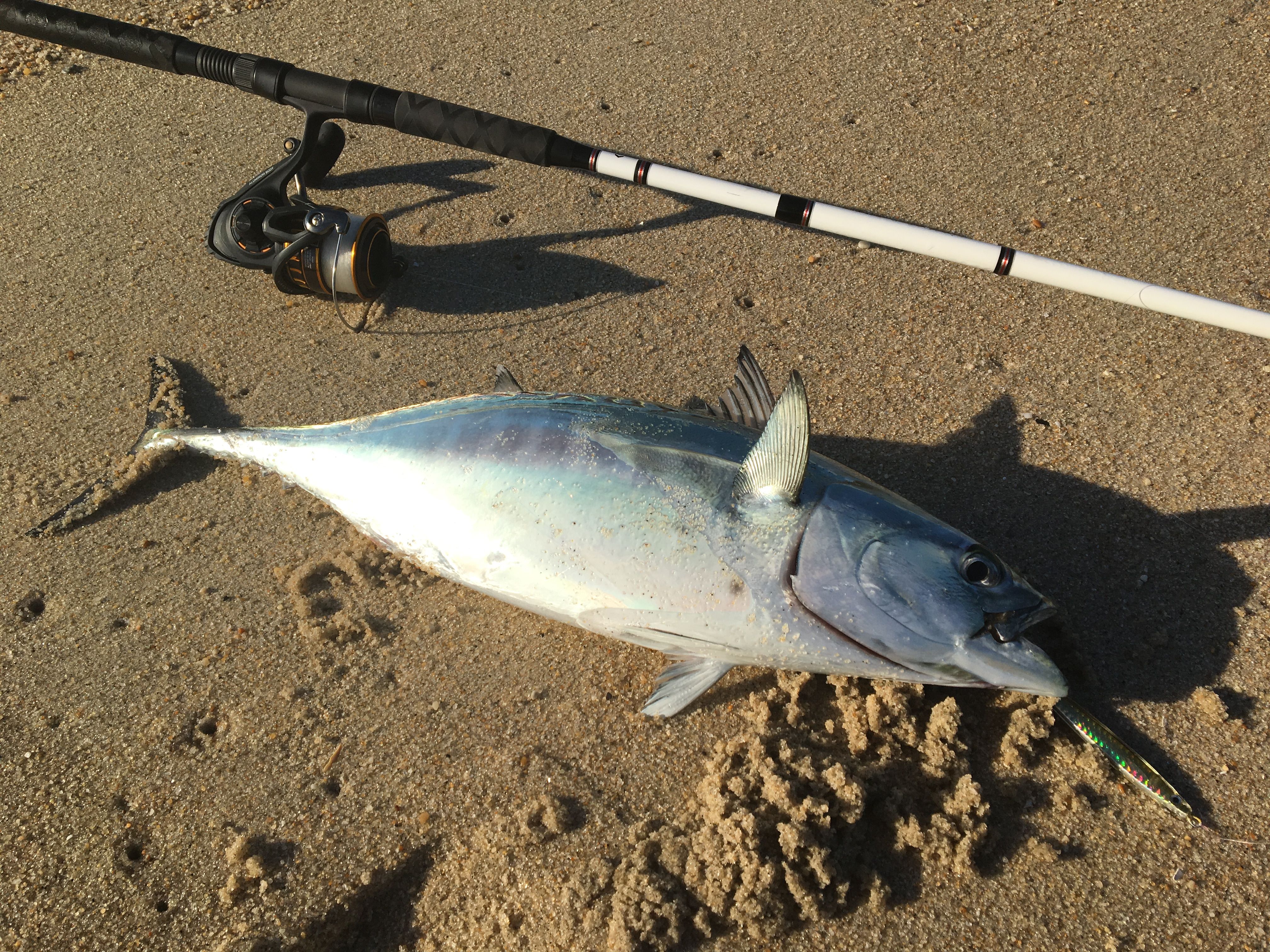 Heading out Sun, Oct 21 and Mon, Oct 22. Sailing Open Boat or Charter. 7AM to 3PM (or later). Making a left out of Barnegat Inlet and cruising the shoreline until we find life. Birds, readings, breaking fish. Good chance we could run into albies, bonita, or stripers. I will have spinning and jigging gear on board for anything that arises. I will also be packing the trolling gear in case we have to. Snagging rods in case the bunker show. I have no limit as to how far north we will  run. If we don't find them close, we could end up at the Shrewsbury Rocks, I get there at least a few times a season when I have to. $200 person, 4 person max, all fish are shared.

Buggying remains testy as all get-out in sections of Holgate. Helped another bog-down. SUV only needed a minor tow to get it off a berm. I always tell folks wanting to give me a buck or to put it in the basket at church. Never sure how that turns out.

Take a look at this short video of the weird color of bay water toward Holgate and also off the end of Green Street in Tuckerton. As I mention, it is not polluted at all. In fact, in Holgate, it’s crystal clear – just tea-colored.

Captain John Lewis of the Beach Haven Charter Fishing Association, who runs the charter boat “Insatiable” out of Morrison’s Marina, is walking around with a smile on his face. Captain John says to all who hear him, “The ocean temperatures are finally dropping so the bass cannot be far behind.

There are reports of big bass to the north of Long Beach Island feeding on schools of bunker, and these bass should be off Beach Haven any day now. Between the cool weather dropping water temperatures, and northwest winds driving baitfish from the bay waters into the ocean, a perfect recipe seems to be forming for striped bass action.

There are currently good numbers of bass in the bay waters, but they seem to be mostly schoolie size fish. The bigger bass are in the ocean and will be caught in two primary ways. Many captains will look for schools of bunker and work their magic with the “snag and drop” technique whereby live bunker are snagged and used immediately as bass candy. The other method is trolling lures such as bunker spoons or Mojos to attract action. Either way, the fish will be in the 25-40 pound category right now.

In other BHCFA action, Captain Ray Lopez had the “Miss Liane” out recently looking for tuna and mahi. They left the boat at 3am and once they set up on the troll, they had two fish on immediately. Throughout the day the crew landed over 15 fish for an action packed day.