Cranberry Note: The chill has readied the cranberries for harvest.

Below is not funny! ... OK, so maybe it's just a bit funny. But no laughing out loud! Late-day update: The north winds and groundswell kept things rough, though the winds backed off toward sunset – and will be light tomorrow a.m. The problem is we have full-moon high tides during both the morning and late-day prime bite times. In fact, there’s still that nagging washover problem, making it tough to surfcast near the water at high tide – without getting sudsed over. Nonetheless, I saw a decent number of anglers as the sun went down – and the nearly fully round moon came up, impressively, as I’m sure Facebook followers will picture-post.

It could get a bit congested on the beach this weekend, as decent weather will draw folks from far and wide. Here's hoping arrivers will pay attention to the slew of NJDOT warning signs near the the Causeway work zone, announcing the right lane is closed for the final approach, eastbound. It's not as troublesome westbound, though the merge still exists. Per usual, it's leadfooted numbnuts that test the safety limits.

Video: Ready to taxi down the runway. Despite a nice day ... big delays for Holgate air traffic.

Friday, October 14, 2016: Well, Cortland Foos has jumped started the Classic in one fell swoop … make that two fell swoops. Check it out. Along with the non-Classic bass taken yesterday … It’s On!

Bunker and clams have worked. Most shops have both. 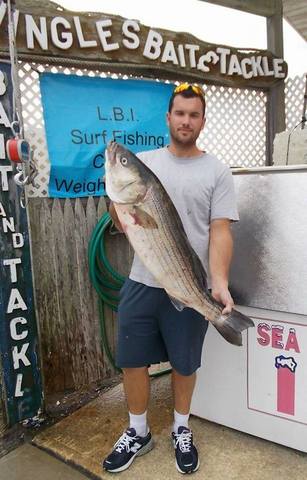 The water isn’t clean or dirty today. It’s a decent in-between, though that highly favors bait over plugs/jigs.

Baited jigs? Works for me, since that usually means a steadily moving offering. While some folks can’t drive 55, I can’t drive a rod holder into the sand …  and then hang around. When I do toss bait, I hold the rod -- and need something to

Nearshore water temps have responded to the cool nights, dropping into the low 60s, with low 50s in the inlet with outgoing tides.

I had a fellow respond to a photo of a pompano caught in Cape May County. He had a hard time believing the shot. I quickly defended the photo. While that was the largest pompano I had ever seen caught hereabouts, I’ve taken cast nets loaded with pompano the size of large sunfish; large enough to be taken by small freshwater hooks. As most folks know, pompano feed heavily on what we call sand crabs, aka sand fleas or, technically, mole crabs. Not that anyone will be trying it, when I used to fish tog off the jetties, I'd take striped bass sometimes two-to-one over blackfish. 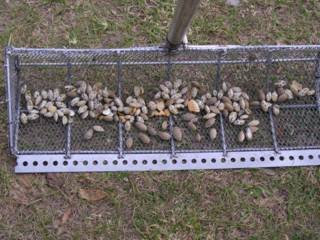 While there is currently no national sand crab census, I’ll wager NJ has the best san crab stocks in the entire nation. I kid you not. Folks who quietly make a living transporting sand fleas to Florida have long known this. Many years back, I took a load down to Central Florida for friends. While the mortality rate was a tad high – maybe ten percent – the just-died crabs caught pompano just as well as the still kicking ones. And I couldn’t believe how much money was made selling beach-caught pompano. Now, there is a six-fish daily harvest limit (11 inches and up) on Florida pompano … the type we see up here. 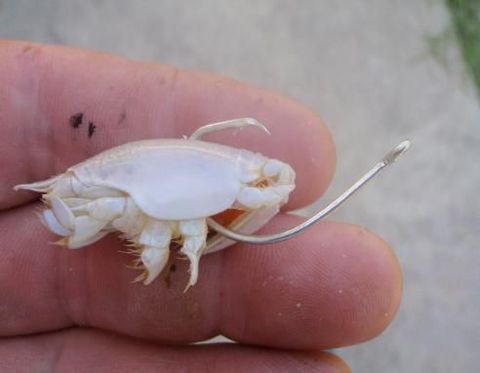 And how can I not use that one Cape May fish to further support a possible south-to-north species drift?

What weighs in at 105 kilograms (231lb) and measures nine metres (30 feet) from mantle to tentacle tip? That would be the giant squid (
Architeuthis dux) found washed up this week on the shores of Galicia in Spain.


The supersized specimen was brought to biologists at  Coordinators for the Study and Protection of Marine Species (CEPESMA), where initial testing revealed the cause of death: the deep-sea creature died from injuries sustained in a battle with another giant squid. "We're sure the injuries came from another squid, because we had a specimen from a previous attack, so we could compare the two," CEPESMA president Luis Laria tells us. 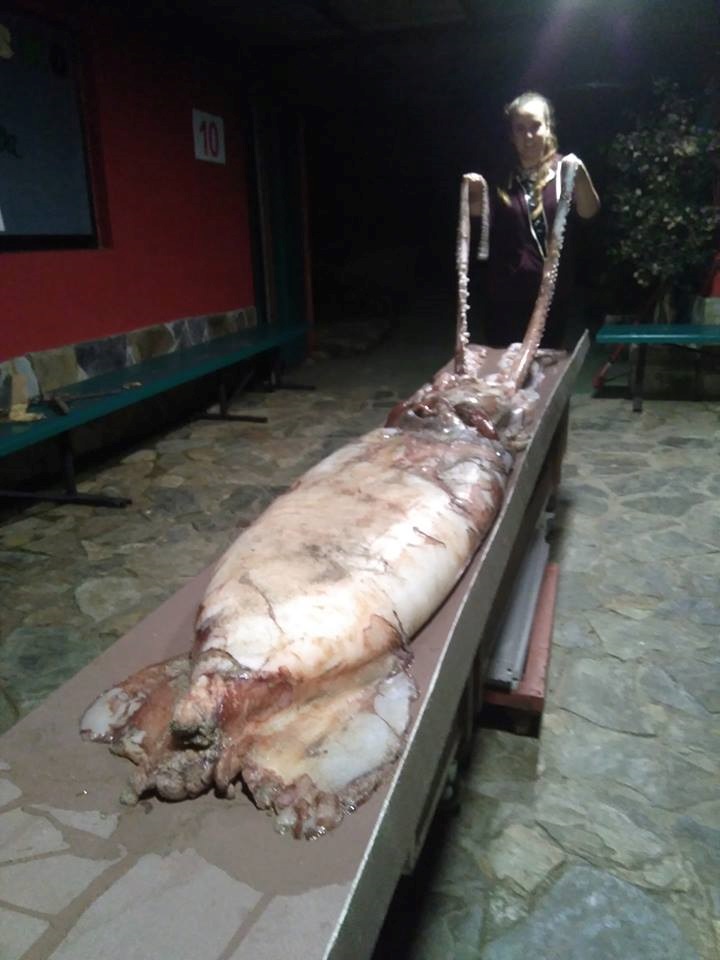 Shortly after the story of the washed-up giant broke locally, the CEPESMA team received some news of their own: a holidaymaker had photographed the squid – alive – just days before. Javier Ondicol, a Leon resident, had seen the animal while strolling through a Galicia port.

"What started out normal, watching your partner enjoying the sea, turned out not so normal. I saw something moving in the water and started to take pictures," he told the team  [translated from Spanish]. "Then a great being looked at me, twisted its body and moved its watchful eye while changing colour like a neon sign."


It's very likely that the squid was already extremely weakened, if not dying, when it approached the shore in a disoriented state. Giant squid do frequent these Spanish waters (in fact, this is the fourth specimen to be handed over to CEPESMA this year), but the elusive animals prefer to keep to the depths.

"The live photos are very important because they show us their behaviour in a way we would not otherwise see," explains Laria, who will also oversee the preservation of the specimen at  Parque de la Vida.

This is only the second time that evidence of such a "battle of the Titans" has reached the researchers. The previous case was discovered early last year, when the sucker-marked body of a squid was hauled up by fishermen in the town of Villaviciosa.

Because the Galicia squid's injuries are also consistent with those caused by giant squid suckers (which are lined by a serrated ring), the team suspects this latest attack unfolded in much deeper water. "The piercing damage affected the mantle and reached a gill, as well as damaged one of the eyes and other parts of the body," adds Laria.

The squid's other eye was intact, which supports the idea that the animal rose to the surface very slowly, and only after it was injured and disoriented. Had its ascent been rapid, Laria suggests, the eye's structure would not have been preserved.
Image: Luis Laria, CEPESMA/
Facebook

Establishing what giant squid like to eat can be tricky. Specimens with full stomachs rarely turn up for scientists to study, and these animals also tend to chop up their meals very finely. Once sliced into bite-sized pieces by the squid's beak, prey is macerated by the  radula, a tongue-like organ covered with rows of teeth.


Still, scientists believe that, at least occasionally, the animals will sample their own kind – and the latest sighting has Laria wondering just how often that happens. "This makes us wonder if they are regular cannibals or if this [attack] was the result of a battle over territory or other causes," he says. "These animals can display very high aggressiveness amongst themselves."

A 2005 study from  University of Tasmania biologist Bruce Deagle found squid beak fragments in the stomach of a giant squid caught by trawl fishermen, and while broken beaks are hard to identify, DNA within the animal's stomach slurry indicated giant squid parts had indeed been digested.


This could explain the squid-on-squid attacks in Spain, but it's also possible the invertebrates came to blows over food – something that's been observed in other large species, like  Humbolt or "red devil" squid: