Friday, October 12, 2012: Still fishin' for better fishin'; Classic warms up a slight bit; Holgate's dead forest murder to get by (Above: Take a wild guess at what was hurting the fishing during low tide today? This grass attack was toward Holgate Rip and was not that prevalent along most of the LBI beachfronts. It often shows after storms, when higher tides wash the seasonal subaquatic vegetation off the bayside flats and it gets into the outgoing tidal flow. The best cure is just what’s happening: wash-ups that mix the grasses with sand and holds it along the beach to rot. Shot by me.)

Note: Folks have asked me to offer more info with photos. They’re right, and I'll be doing so -- though some shots are snagged off FB where there aren't always excessive details.

Friday, October 12, 2012: West winds were in fine form today, making it a breeze to cast plugs out and beyond. Now if there was only something on the receiving end. Not for me, bass-wise, though I hit on a couple 3-pound blues, slightly larger than the tailors we've been getting for weeks. The big difference is the fewness of these slightly bigger blues. Big gaps between hookups, at least using artificials.

The bassing has shown a bit better from mid-Island region northward. A few anglers working those waters have had a string of decent striper days, with most fish not quite up to Classic-grade but plenty of fun – with frequency thrown in.

Perennial Classic contenders are already testing out the scales. New leader is Tim Stumpf, who used bunker up in Loveladies to nab a 24.63 striper. It was a predawn fish.

By the by, that just-before-dawn timeframe has been mighty spicy in recent falls. While it’s not my cup of wake-up tea, it sure seems to have taken the place of the once sure-fire “night bite.” The night-bite has gone missing for years now. I’m waiting for the dusk to just-after-dark bite to return. That is fully suited to my schedule. My biggest tourney bass was caught just after sundown, in Holgate.

Kingfish might have left town, per an angler who had hunted for them in all his best kingfish holes, to no avail.

Mullet are somehow still showing after 35 days. Weird – but a good weird. Those balled up now have a lot of small fries mixed in. Bunkies have not been around (in the surf) – after those few days where they showed fairly heavily.

Late-day plugging, mid-Island, came up negative for me. Tonight’s chill might spark something near inlets, where colder bay water pours out.

I see another weigh-in hit the scales today. With serious fishing pressure sure to show tomorrow, we’ll surely see more scale action. Make sure to sign up for the Classic before heading out.

Best bait will be large bunker chunks, the fresher the better. Mullet should also have a rod, for bluefish showings. 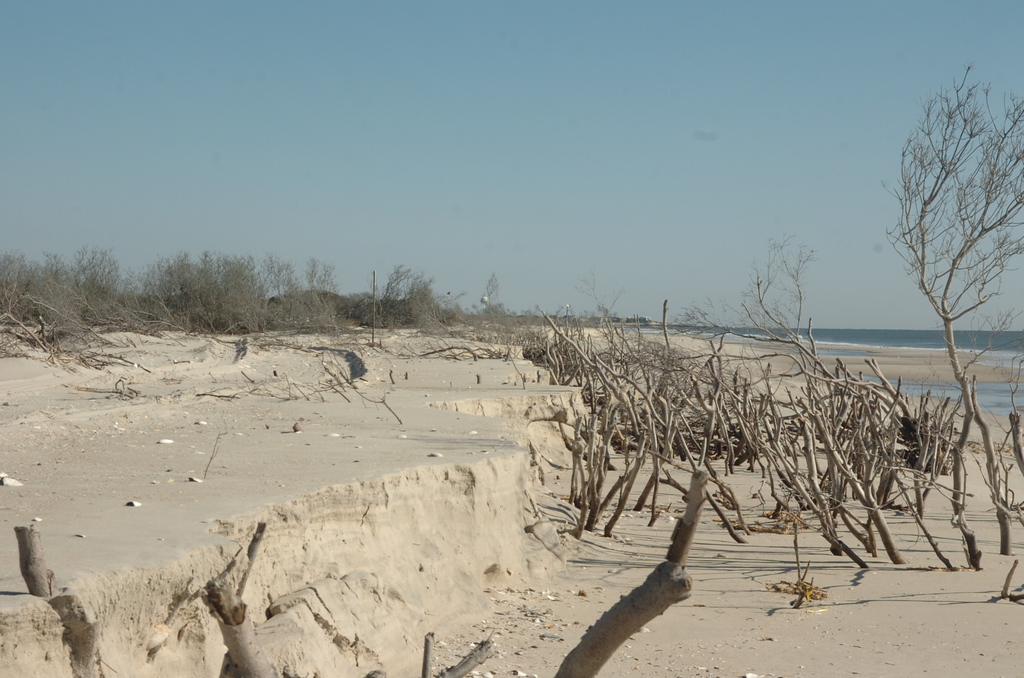 Above: The drive to the Holgate Rip is fraught with obstacles around the dead forest zone, maybe 8,000 foot mark. In fact, it is such a pinch-off point that there is no getting by -- coming or going -- once the higher tide has overwashed the dead trees and shrubberies. You truly will have no choice but wait out the tide if you get caught south of the pinch point. By the by, those branches and stubs can inflict serious dent damage to buggies if you hit them wrong, namely grazing them. It's actually better to hit them straight on if contact cannot be avoided. The bumper takes the impact. Still, it's no win trying to drive through the dead trees. The trick is to go in and out at low tide. With these west winds, that'll work all weekend. However, we have exceptionally high tides coming next week. Real big buggying headaches. I'll keep you posted on that. All photos by me.

(Below) Trying to drive high, above the beach, is a dead end move in that same dead shrubbery zone. 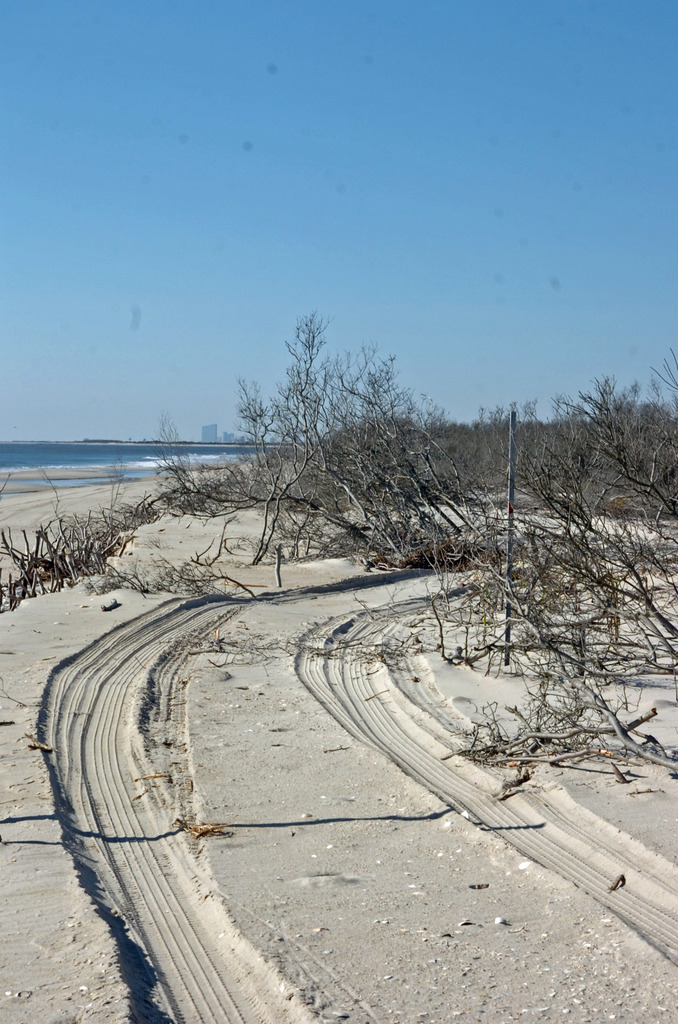