Below: For throwback Thursday, I'll go all the way back to Nam. This is the capture of a downed American pilot by both civilians and the Vietcong -- commonly "VC," or "victor charlie," in military radio code). The face-up captive: U.S. Senator John McCain. Talk about paying dues to run America's government. So, who’s up for some honking northeast winds? No problem. Tomorrow will be very nostalgic for those who remember way back to last week. We’ll see 30 mph gusts all day. Mercifully, those onshores will be of astoundingly short duration when compared to the NE-erlies we saw for three weeks running. By Sunday a.m., the winds will die down and by next week we should be in a very autumnal pattern, with high temps only into the mid-60s.

I still stick with my belief all this ocean stir has some serious stripers in our midst. Stripers in the midst, as it were. I don’t want to sell the big bluefish short. They also go gonzo in roiled waters loaded with discombobulated baitfish.

This is the prefect weekend to sign up for the LBI Surf Fishing Classic – considering it starts tomorrow. Come one, come all. Just don’t catch a massive fish and then try to retro-enter.

Note: This year the Classic really wants to come into better focus -- with photos. Please grab some just-caught – or even fighting-a-fish – photos.  Many cellphones now shoot in a resolution easily high enough for great presentations on the Classic’s website … and, yes, in my blog.

Below: Your catch doesn't have to  be earthshaking (circa 1975). I’m more attuned than ever with not burning sights so I’m discreet with my information. However, the event would like more than just North End,” “Mid-Island,” and “South End” on weigh-in forms. Come on, it won’t expose your exact cast-zone to offer general info by generally naming Harvey Cedars, Peahala Park, Beach Haven (aka “town”) or Holgate.

I, like most anglers, really like to know any exact details about gear, bait, fishing methods, hooking up and landing fish. That shouldn’t be guarded info. I’ve learned in spades that quite often the near-majority of website readers are simply fishing vicariously through us folks lucky enough to be on the beaches at a given moment. Sure, nearly all readers get in some fishing time but life itself too often has them hooked in place, until they can spit the hook and hit the beach, even if only for a short stint. Sharing info makes the day for many an office- or home-bound reader. One other thing about pics, it’s a great way to get some recognition and renown for catch-and-release fish. In-field (on-beach) photo, along with accompanying data/story, is as good as a shop weigh-in when a fish isn’t going to make the scales. 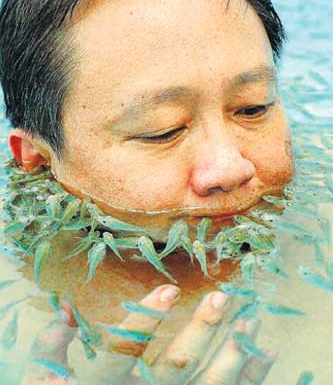 BUGGYING BANTER: I went down and checked the new replen area of LBT, now being worked on and obviously off-limits to buggying. It doesn’t look like we’re losing much real estate for fishing. The project moves along very quickly, freeing up the just-completed section. It does mess up a continuous buggy ride from Surf City to Holgate.

Also, you’ll see a goodly amount of LBT public work vehicles grooming the damaged beachline. It is highly unwise to drive through that water-to-dune plowing zone. Not only does it mess up the concentration of the there-to-help-us public works folks but, man, is that loose, just-plowed sand sinky. Also, driving over the tread scars from the dozers can bounce your prostate up through your stomach.

The beaches north of the work zone are tricky. Check out this 10/8/15 video of one just one of the crippled beach buggy entrances. http://www.youtube.com/watch?v=kEJNSzxnMto&feature=youtu.be

Even Brant Beach is bad. Hard to believe but I had a bitch of a time driving there  yesterday; loose sand and sinkholes almost up to the dune fencing at high tide. That area had been wide and hard as rock last winter. I know it’ll harden up real soon but the upcoming northeast wind will slow that.

“Not much to report. Fishing still sucks. Water is still dirty. Should clean up over the weekend, just in time for the start of the tourney. No sign of mullet at the rip or around the back. Did pick up several real small blues around the back, so there is some sign of life.

“Switched it up a bit today. Was tossing a one ounce bucktail with a strip, and did have a few hits at the rip at low tide. So might give that a shot again tomorrow, seeing the poppers, and sp minnows did not attract anything.

“Tried bait fishing with mullet at the rip, and after 40 minutes without a touch, gave up on that real quick.

“Spent the rest of the morning helping Stu pull and move some more refuge signs. There are still a lot more missing.

“Beach is in great shape! Still have to watch the tides, but next week it looks like it might be a good run the length of the beach through the tides.”

As hockey season gets underway, here's an epic photo of an NHL goalie prior to masks ... Are you shitting me!? Dude, you gotta get another job! 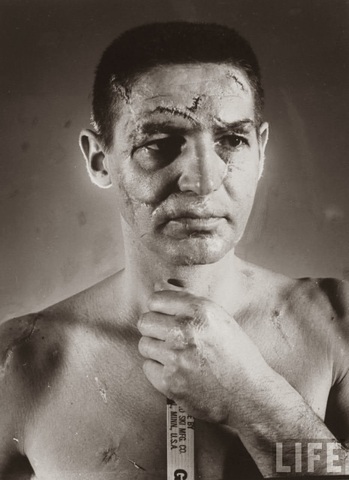 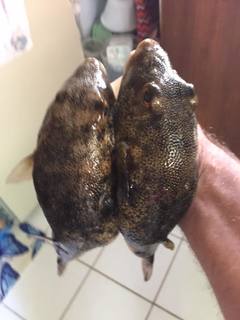 I'm not sure how recent this photo is from AJ but I had a couple night bass anglers recently hook up with mystery fish they simply couldn't turn -- and both of them had moderate gear to handle the conditions. One had the hook pull but the other angler lost a lot. I won't get into how much but it was costly for both him and the environment -- and he's a fanatic environmentalist. The lost line, now ghost line, hurt him more than the replacement cost of the designer line.

By the by, he had a circle hook, on powerful braided line. You tell me how you stop a runaway run-off in that case, short of having a line-cutting device at the ready. The problem, I'm told, is for the first hundred outgoing yards, you're still thinking world-class bass in play. So no early line-cutting intervention takes place. As the drag whine just won't stop, reality sets in -- but the amount of line in play now begs a try at turning the beast. Anyway, all was soon lost. There is little doubt it was a shark of who-knows size. 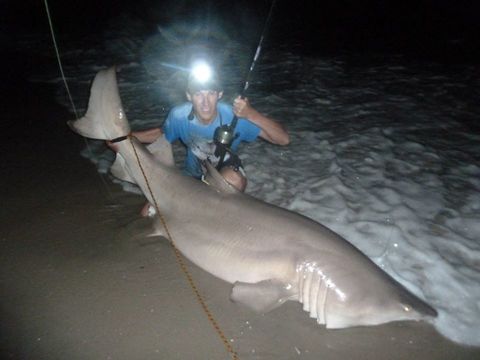 I just posted a link in my bio of my good buds daughter putting her first #falsealbacore on the beach. She is currently leading the junior shore Albie catagory! Congrats Leah 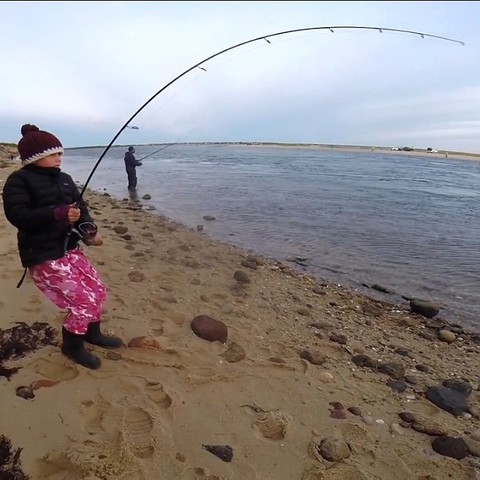