Friday, May 01, 2015: Functional northeast winds; unseasonal storm by next week?

The onshore winds have knocked down the fishing effort, which had been building with those bass and bluefish bites coming and going.

There is much better and milder weather on the near horizon, though I see south winds – which can be fully frigid this time of year – quickly coming into play.

TOO SOON: You might have heard about an odd low-pressure system possibly forming off the SE coast next week. Yes, that’s a long way off. But, even I have to admit that modern long-range forecasts – combining computer analysis from experts around the world – have gotten reliable enough that they’re worth keeping a close eye upon.

Details to date: A strengthening low pressure system could form of the Eastern Seaboard by May 8 or 9. And it could blow up real good.

Even though we’re still a month from the official start of so-called “hurricane season,” tropical cyclonic systems can form any time of the year – and often do. In fact, the month of May has seen a goodly number of tropical-like storms.

I say “tropical-like” because they’re not the spittin’ image of true tropical cyclones, lacking some of the telling components, most noticeably warm surface water.  Such would be the case should this system form off the coast next week. In fact, after looking at a slew of computer projections, I would foresee the potential storm as being extra-tropical – a cold-core system, forming off Hatteras.

Not to over worry, though. Right now it looks to be just a near-miss oddity/novelty – holding well out at sea. Waveriders could cash in while surfcasters might have to get the lead out.

Far more anecdotally, there are those (including some meteorologists) who feel that the track of tropical systems for the entire hurricane season is established early on. They could look at the way this potential low is forecasted to swing northward, then eastward, as a sign that’ll be the trend all year. While I see some strong historical data aligning with such a theory, I think it applies far more to the first storms in the heart of the hurricane season, where disturbances begin off Africa and make a long run westward. A single fluke-ish storm system in May is not enough to predict all cyclones will be trending up the Eastern Seaboard. I guess it’s also getting time to factor in how storms might impact the beach replenishment, set to have already begun. Even this current blow is enough to slow the starting process a bit, as dredges move this way. You likely know, the work will begin in Ship Bottom.

For more immediate storm threats, check out the http://www.cpc.ncep.noaa.gov/products/predictions/threats/threats.php 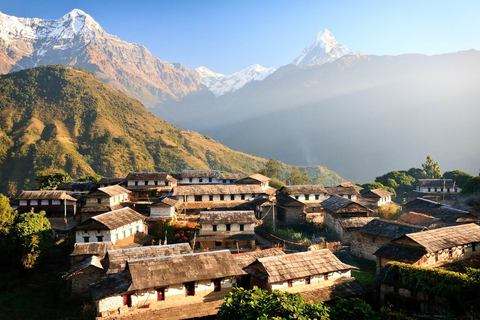 Why we should all dig deep into our pockets to help Democratic Republic of Nepal. That nation seldom if ever asked any other nation for anything. The people are proud and independent – and date back to Neolithic times. Primitive tools found in the Kathmandu Valley have been carbon dated back eleven thousand years.

The Nepalese people have often been proud to ask for a helping hand. To me, those are the type people who truly deserve heartfelt aid. It’s not like they have mansions to rebuild, so the simplest supplies to help rebuild their humble dwellings offer a chance for folks as far away as New Jersey to feel they’ve sent a small part of themselves in Nepal. 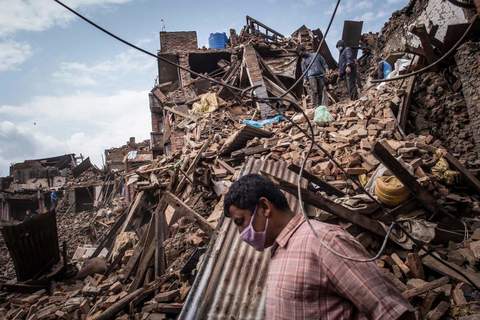 I chatted with a fellow who took a drum last week. He remarked on how tasty it was but when his wife, while looking for recipes, read the multifarious reports of parasitic worms common to the species. While she duly noted it seems it’s mainly larger drum that can all but ooze worms, there wasn’t a single mention of avoiding the black drumfish flesh. Quite true. As to the concept that larger drum have more worms, thaat’s only partially true. Firstly, even a smaller fish, if exposed to the worms, can have a load of them.

The tiny worms that most often enjoy black drum as hosts are a type of spaghetti worm (generic term), technically known as Pseudogrillotia pIeistacantha. 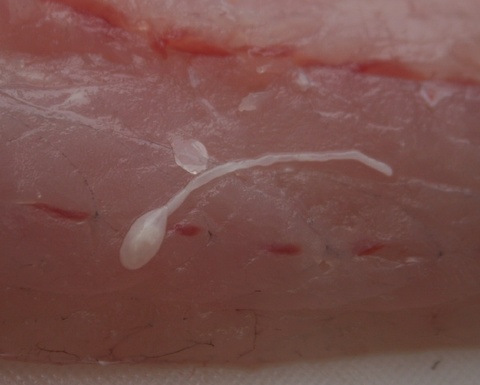 The only non-technical literature I found on this worm answers the big question. Via Sea Grant:

“…While the spaghetti worm may be somewhat unappealing to the eye, it certainly doesn't prevent good eating. Since, they are large enough to easily see, they are simple to remove during the filleting process. Simply grab the worm between the knife blade and thumb and gently pull it out. With a little practice, it becomes easy.

“Many people don't even bother to remove them before cooking. After cooking, they are unnoticeable and cannot be tasted. In a survey conducted at Mississippi fishing rodeos a few years ago, less than 25% of the trout fishermen avoided eating fish with worms.

“While cooking does, of course, kill the worm, even without cooking they are not a human health problem. No human infections have been recorded and researchers have been unable to infect warm-blooded animals with the parasite.”

Below: Life cycle of spaghetti worms: 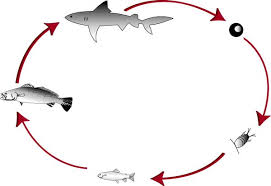