Friday, March 31, 2017: I thoroughly enjoy looking more into things than should be looked into, uh, things. I think that just made sorta sense

When they have the Rastafarian Olympics my money is on this guy ...

I know one lady who'll prefer those Rasta games over the Olympics ...

Friday, March 31, 2017: I thoroughly enjoy looking more into things than should be looked into, uh, things. I think that just made sorta sense. Maybe it will when I speak out on some recent pics from  Surf City B&T . They show some not atypical striper action after dark, Manahawkin Bay. The tackle shop also shows a a thought-provoking slammerish shot.

I used to be among a small crew to tap that bridge area almost nightly in spring, exclusively using artificials, mainly jigs and plugs. I’m not sure why I stopped but I know it wasn’t because the fish quit coming, though the big spawner/tiderunner weakies got rare and rarer.

BACK TO BIG BLUE TIMES?: For me, the tastier news was that big blue. Are they showing here already?

It’s obvious why I might read a ton into that photo. Last spring, we saw the largest run of mega-blues in the history of the world as we know it, culminating in Barnegat Light South Jetty action also above that ever seen by the modern world. Those blues made their big-ass presence known in the bay, along Island beaches and even up some backbay creeks. 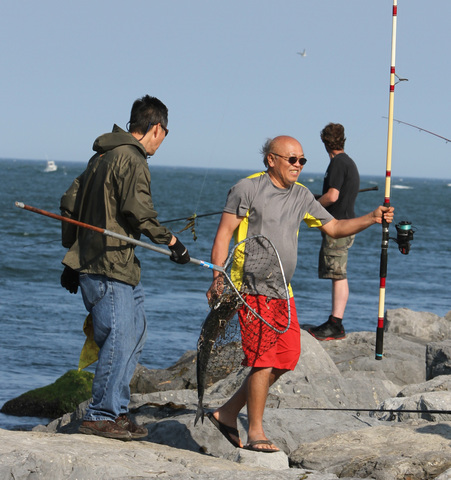 OK, I probably just jinxed the entire spring bluefish thing by even remotely implying this single way-early bridge blue is a potential forerunner of massive gator bites to come, but, as noted, I thoroughly enjoy looking more into things than should be. By the by, I have no insights whatsoever into the legality of fishing atop or even beneath the Causeway trestle bridges while the Big Bridge rebuild is taking place. Give it a go. Tell the judge I said it was alright.

I do know fishing is legal, fine and good off the Ship Bottom bayside fishing pier, west 11th street – boat launch area. That pier can also be fished to target winter flounder during the day, the channel being within casting distance. Tackle shops can set you up with best black-back rigging and bait. You just better have patience coursing through your veins. That’s a tough one for me. Patience can be very time consuming. My AD/HD can’t even spell pashinz.

BASS BE-BACK?: Since I’m on an over-stating roll, I’m optimistic that the spring striper bite might be decently decent, which is saying a lot after a few skunked up striper years in succession, especially from the beach.

I’m basing my bass upbeatness on the nice sandbars – almost a feel of naturalness -- after winter storms have rearranged beach replenishment sands into patterns more common to LBI shorelines of the past. We'll know fairly soon if the bass are back in town. It'll take well into the fall to know if a big return is in play.

Obviously, whatever has driven off the once plentiful LBI striper stocks is surely more than just the sand shenanigans being carried out by humans. It should be remembered that we were seeing a spooky decline in stripers, especially the fall run, long before big beach fixes were underway.

My first eco-guess at why bass might shun our sands would be a decline in crabs. Crabs are far-and-away every striper’s go-to foodstuff; their survival foodstuff. Stomach contents studies have proven that. 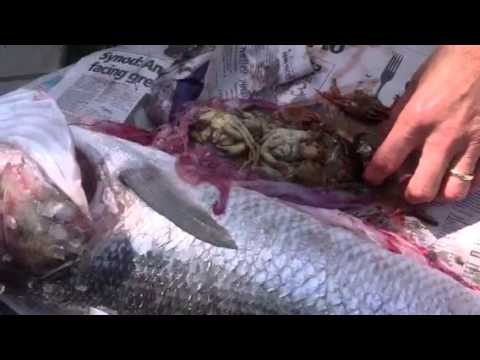 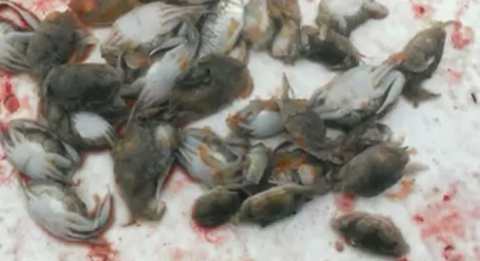 While LBI sandcrabs stocks are healthier than ever – and I’ve bycaught many a striper when using them for bait when targeting tog off the rocks – the rock/jetty-related crab species, like Jonah crabs, have taken a sanded-over hit. More importantly, lady crab numbers are simply not there like they used to be. Bass thrive on these medium-sized crustaceans.

Below: Jonah crab used to be plentiful among jetty rocks. 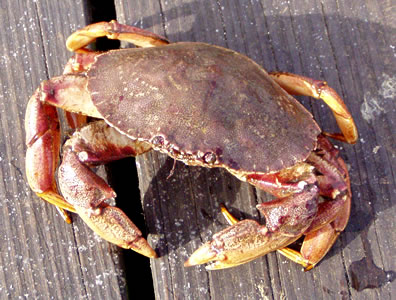 Below: Lady crabs are a constant craving for stripers of all sizes. Remember when you couldn't walk through shallow beach waters without having toes nipped by them -- followed by a freaky just-bitten water dance that got everyone around you staring over your way? When's the last time that happened? They've been disappearing at an alarming rate. Speaking of the known crab obsession by stripers, during my diving days, I watched scattered schools of bass slowly but tirelessly bottom feed on crabs. However, almost like humans tiring of the same-old/same-old, should some other edible come into sight, they quickly went after it.

Of course, the larger a bass gets, the higher the tendency to nix expending a ton of bottom-based energy picking and pecking away at crabs. It begins zeroing in on meatier meals. The meat gotten by a dozen crabs can barely match the protein of a single nice-sized bunker. Such an energy bonanza is well worth lazily stalking big balls of bunker. However, it is very common to find even trophy bass – feeding on bait balls -- with a stomach full of not only bunker but a slew of crabs and such, particularly mantis shrimp.

Ellsworth - Elver fishing season opened on March 22 but, while Downeast stream banks are blossoming with fyke nets, at least so far, the juvenile eels that can fetch $2,000 per pound or more when the market is hot have been pretty scarce.

“Everyone set their nets to save their spots,” Darrell Young, an elver harvester from Franklin, said Monday morning. “The water’s too cold. I haven’t even started fishing yet.”

According to Young, fishermen with nets in the Union River have been landing only a few eels at a time.

That’s not many, considering that it takes about 2,000 elvers to total a pound.

The few elvers that fishermen have been taking haven’t been of very good quality either.

“They’re weak. They don’t want to buy them,” Young said.

Weak or not, the few elvers that have been coming to market are fetching a reasonably good price.

On Monday, Bill Sheldon, one of the biggest buyers among the state’s 20 or so licensed elver dealers, said he was paying fishermen $1,300 per pound for the few elvers he was seeing.

“It’s been cold. The catch is very slow.” Sheldon said, speaking by telephone from his Ellsworth buying station. “We’re waiting for warm weather. Then the catch will rise.”

Fishing under an annual quota imposed by the Atlantic States Marine Fisheries Commission in 2015, Maine harvesters may land no more than 9,688 pounds of elvers. Of that, 21.9 percent – some 2,121.7 pounds – is allocated to Maine’s four federally recognized Indian tribes.

In 2015, the first year during which the Maine fishery was limited by the quota, a cold, dry spring delayed the migration of elvers from the sea into the rivers where harvesters set their gear. As a result, Maine fishermen landed just 5,259 pounds of the tiny creatures, little more than half the 9,688-pound quota. That season saw an average price of some $2,171 per pound.

The ASMFC is expected to revisit the state’s elver quota later this year. That could be good news for Maine fishermen.

Over the past few years, the state has opened “more than 2 million acres” of habitat to elvers as a result of dam removals, culvert repairs and other actions, Young said. If the ASMFC accepts that figure, Maine could see its elver quota climb as high as 12,000 pounds.

Despite this year’s slow start, Young and Sheldon both sounded optimistic.

“I don’t think we’ll have any trouble catching our quota this year,” Young said.

According to Sheldon, the prospects for this year’s elver market are reasonably good, though it’s too early to know for sure.

“It seems like a normal year,” he said. “It’s hard to tell. “There’s similar demand and similar prices to last year.”