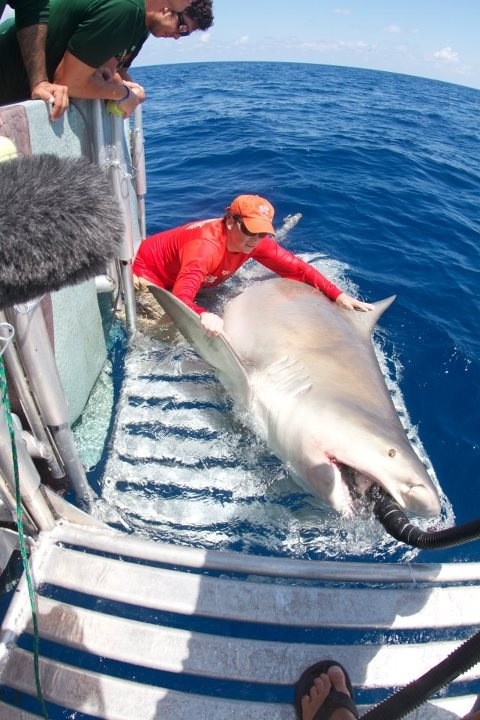 A research assistant professor at the University of Miami, and the director of its R. J. Dunlap Marine Conservation Program, Neil Hammerschlag spends every other weekend in southern Florida dragging baited, shark-safe lines behind a boat, hoping one of his research subjects will take a bite.

On Sunday, May 27, they were having plenty of luck. Something snagged the other end of the 75-foot (23-meter) line, and Hammerschlag began to pull it in. Right away, he said, he could tell something was different.

"It's a lot of work to bring up a line, but I can usually do it myself," he says. This time, he needed help.

He and a colleague joined forces. "We didn't know if we were pulling up a sunken boat, a monster shark, a school bus — we had no idea which it was," Hammerschlag told OurAmazingPlanet.

They were in about 150 feet (46 m) of water, and, even as the two men strained to pull in whatever it was, it remained invisible, hidden by the murk of the shallow ocean.

“As soon as it came to the surface, it literally took my breath away, it was so big," Hammerschlag said. They had hooked a massive bull shark, the region's top predator; the shark was about 10 feet (3 m) long and, the researchers estimated, over 1,000 pounds (454 kilograms).

Friday, June 08, 2012: A kinda nice day but the winds are a bit shifty. They’re not honking but it sure looks like we’re easing into one of those potentially troubling land/see breeze situations, meaning light winds early-day then the daily possibility of significant SE winds as the day goes on. It’s pretty typical summer stuff but during springs/summers with warmer water, as we’re likely into, the clash of the two associated air masses can kick afternoon breezes into full-blown honking southerlies. Just keep that in mind if planning a fishing day – though it’s always been an angling adage and certainty that way-early is always best.

I have a few reports of fair bass fishing in the surf. Still nothing remarkable – and still below normal – but three different surf anglers took home a couple “eater” bass (each) in the 30-inch range.

Clams and bunker are neck-in-neck, bait-wise.

Tides and times haven’t mattered a lot with bait fishermen, though give an edge to high tide -- and sunrise will always be stripertime. Pluggers are purely early a.m. score. Jigging the suds works any time of day – and offers the best chance at a fluke bycatch.

ALABAMA HITS NJ: I was watching a Saturday morning fishing show that featured the use of downsized umbrella rigs – as plugs. They’re called Alabama rigs or simply “casting umbrella rigs.” Loads of tackle companies are beginning to make and refine them.

I had always wondered about throwing umbrellas from shore but the trolling sizes was way out of the question. Now, these smaller umbrellas are on-scene and  can be graced with sturdy plastics. Importantly, they come with thin steel leaders going to the artificials. You can easily add whatever type of plastics or even baited hooks to the four, five or six lines/arms trailing behind the center piece.

The show had bucketmouths going for the fairly bulky offering. Interestingly, the dark leaders didn’t matter a bit to those freshwater bass. I’m guessing there is so much action with all those plastic tails waggling that temptation is multiplied beyond survival sense.

But would such castable umbrellas work in our surf or bay – or even if cast from a boat? I guarantee it.

One biting problem that cones to mind is bluefish. They’d go utterly bananas over such an offering. The Alabama rig being used on TV had something like six plastics. I can just about assure that it would be almost impossible to hook just one bluefish if schools of them are around.

As for stripering, I see this presentation as a sure-shot hookup with smaller bass. I’d be wholly amazed if a larger bass went for such a contraption.

I called Fisherman’s HDQ to see if they carry the castable umbrella rigs (they do) and I got an angle I hadn’t thought of: fluke fishing with them. Obviously, it would require allowing a lot of sinking action but imagine the reaction of fluke to the school-like showing of plastics, or, if you’re very energetic, a slew of minnow/squid combos on hooks. I think that gives me the perfect fluking set-up for my kayak fishing. I can either cast and retrieve slowly or paddle troll – which is the exact speed to allow the umbrella to hug the bottom. I’m getting excited. I live for new fishing methods.

I’ll keep you posted – or if you’re already trying castable umbrellas, let me know the tricks of the trade.

Scientific projects such as the development of disease-resistant salmon in New Brunswick and an examination of how climate change is affecting Ontario lakes could die on the vine because of cuts to the federal Fisheries Department, university researchers say.

The department is bracing for a $79.3-million decrease in funding over the next three years as part of Ottawas cost-cutting measures. Officials have said research will still be done, though it will be refocused on what it says are areas that directly support conservation and fisheries management.

Federal scientists losing their positions say they arent permitted to publicly discuss the cuts, but their colleagues in academia say valuable knowledge could be lost, posing threats to the countrys environment and its competitiveness.

These scientists have an incredible number of years of experience working on a particular topic, says Elizabeth Boulding, a molecular ecologist at the University of Guelph.

When I go in there with a project, we can get a lot more done in three or four years than we could possibly do without their assistance.

Boulding cites as an example her work with Brian Glebe, a biologist at the Fisheries Departments research centre in St. Andrews, N.B., whose position will be cut following a program review last year. For seven years, they have worked to identify genes in salmon that resist infectious salmon anemia, a virus that can kill up to 90 percent of the salmon it infects, depending on the strain.

They are also seeking the genes of salmon resistant to sea lice infestation with the goal of breeding those fish.

This worries me a great deal because I cant do this work myself, Boulding says. There doesnt seem to be any plan to replace him.

It makes me nervous about writing another grant to do this work because I dont know who else can do this work.

Glebes job is to introduce the diseases to salmon in quarantined pens. He said hes uncertain of how much longer hell be able to stay on in his post, and referred other questions to the departments communications staff.

Boulding said Canada runs the risk of falling behind other countries such as Norway, where the public sector is doing similar work with its aquaculture industry.

If they have disease-resistant salmon and we dont, how will we be competitive? Boulding said.

Dave Gillis, director general of the ecosystem science directorate at the Fisheries Department, said the decision to cut Glebes position and other more recent budget reductions came after careful review.

The number of subject areas that the program was to focus on has been reduced and it no longer includes the subject area that Dr. Glebe was working on, he said in a telephone interview.

Gillis said he doesnt know whether others would continue Glebes work.

Its a case-by-case situation, he said.

Other university scientists are also alarmed by the departments decision to end its support of the Experimental Lakes Area water monitoring project in northwestern Ontario. The 44-year-old program covers 58 small lakes and is used by scientists to conduct real-world experiments on entire ecosystems.

A group of university scientists and students trying to save the project says research done there has altered environmental policies across the continent, prompting mercury emissions rules for coal-fired power plants, a ban on phosphorus in detergent and action on acid rain.

David Schindler, an ecologist at the University of Alberta, is among a network of university professors opposing the cut.

The Experimental Lakes Area is probably Canadas most famous scientific facility, he said in an email.

Doesnt it seem foolish for a country that seems to have chronic anxiety about its international stature to close such a facility?

Gillis said the department is attempting to find universities to take over research stations, but added he cant be specific about how or when that will happen.

We are going to work with the science community to find an alternate operator for the site, he said.

We are aware that there are a number of universities and other agencies that either work there directly or fund work there. So, we will very shortly be initiating discussions with the various elements of that community to seek their interest.

Cuts have also struck the Bedford Institute of Oceanography in Halifax, the countrys largest ocean research centre. The institutes Centre for Offshore Oil, Gas and

Energy Research will stop some of its work, though Gillis said an advisory group of outside scientists will be given funds to continue research on the biological effects of contaminants.

But Jeff Hutchings, a biologist at Dalhousie University, says he has concerns about that approach.

Advisory groups do not undertake research. They advise, Hutchings said in an email.

This group is no replacement for dedicated scientists embedded within a dedicated government science program. This news bears all the transparent hallmarks of the stop-gap measure that it is and the utter absence of leadership that it represents.

Gillis said he cant say precisely how many science jobs have been cut in the latest round of budget cuts.

The departments annual budget is $1.4 billion.