In men's soccer you've heard of the "friendlies." The ladies? Not so much so.

Friday, June 03, 2016: The winds died down late in the day and look like they’ll be low – and slow to pick up – tomorrow a.m. In fact, the entire day should be fishable with a shift toward a surfcasting and bayside fluking emphasis as the day goes on and south winds pick up.

Sunday is going to be a real strain on the skies. A load of little factors are going to make the air tense and likely wet further inland.  We’ll have much cooler air long the immediate cost, which should steal some of the thunder from any storms that make it this far east. Nonethless, boating on Sunday is going to be tricky so cash in tomorrow.

By the by, they put up cones so you can’t turn down the Cedar Bonnet Island dirt road. Hey, it wasn’t just because I went back there. Seems a goodly number of folks have been checking out the construction area. It won’t officially open for quite some time. The overlook turn-out off Causeway east is open and offers a nice look at the pond just to the south of the pull-off area. Obviously, you gotta be as careful as all get-out pulling off and then pulling back on 72 … though there is a bit of a shoulder to use pulling in and out. PLANT BE-GONE: Some folks were asking about my report of bassing over near The Plant, Oyster Creek. All I’m allowed to say is “Yes.”

That said, it is already time to start preparing for what happens, environmentally and recreationally, when the Exelon-owned nuclear plant in Lacey Township shuts down for good in the very near future, as in 2019.

“The State has negotiated and entered into an agreement with Exelon Corporation to cease electric generation operations at the Oyster Creek Generating Station by December 31, 2019. 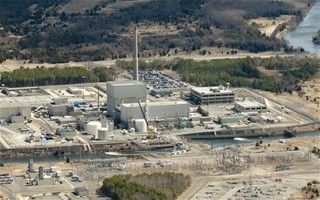 “Shutdown of the plant is the best technology available to ensure that Oyster Creek withdrawals from Barnegat Bay for cooling purposes and discharges from the plant do not damage the ecological health of the Bay.  The plant closure agreement establishes a definite timeframe in which use of the Bay for cooling water will cease.  Closure of the plant will have a significantly more beneficial environmental impact than requiring the installation of cooling towers, which, under the best case scenario, would take seven or more years to be installed and, unlike plant closure, would result in significantly greater continued water withdrawals and discharges. …”

To be sure, there’s no need to fear any fiscally horrific repercussions for Exelon (NYSE: EXC) owners and investors. The company has reacted to the loss of Oyster Creek by spending $6.83 billion to procure Pepco Holdings Corp. (NYSE: POM), owners out our Atlantic City Electric Company. The merging of EXC and POM creates a utility giant with well over 10 million customers, making it the leading mid-Atlantic electric and gas utility company.

The merger seemingly saved most of us some money on our last electric bill. Methinks we’ll more than pay that back – and then some -- within a few months, as increased power costs reflect the company compensating for the loss of Oyster Creek facility by strategically soaking customers.

But back to the big question: What will the shutdown do to the bay – and a fishing clique that has formed in the outflow creek area?

Firstly, the apparently large biomass that lives an unnatural existence in the warm waters near the plant will be, essentially, evicted – egged out by a suddenly not-so-idyllic environment.

Can the fish addicted to the plant’s heated waters survive? Many won’t. They will simply fall prey to the nature-hardened species within the bay. It’s not a stretch to envision displaced “reactor” fish wandering aimlessly around the bay, until gulped down -- having had much of their instinctive survival skills melt via a sequestered, warm-water existence.

I should mention here that it is very likely that the NJDEP will require a plant shutdown in summer to avoid a catastrophic thermal shock die-off, as happens when the plant is forced to shut down in the winter.

So, what then – after Oyster Creek is just another waterway? I’m betting the fishing remains decent at the Route 9 bridges and along the entire waterway, from plant out to the bay. The big difference will be a far more natural ecosystem, identical to other similar waterways loaded with bay life. The creek will obviously remain fine winter flounder and crabbing area.

Looking further afield – and out toward the outback – here’s hoping the kayaking and canoeing potential of the entire length of Oyster Creek is realized – by allowing a paddle from the headwaters to the bay. It’s an amazingly pristine waterway from freshwater to salt.

Here’s hoping even further that the state steps in to totally preserve the very large stretch of pygmy pines to the west of the plant (out to the Parkway). I could easily see that becoming a Wilderness Area since there will surely be some sort of public access restrictions even after the plant shuts down – to eventually be disassembled.

As to any overall Barnegat Bay impact from the plant shutting down, there shouldn’t be much beyond the entrance to Oyster Creek.

I often detected fish infections and parasites likely attributable to the unnaturally warmed water related to the cooling of the plant. In fact, we’d catch a truly sickly looking fish – gamefish or forage fish – and automatically dub it “a fish from the plant.” Those illnesses will disappear quickly as the goes through a more natural seasonal warming and cooling process.

More on the closure as it evolves.

Check out this amazing piping plover chick shot by Kevin Knutsen, as the tiny bird drinks water from a leaf. 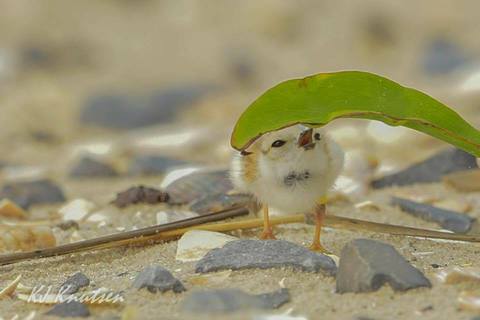 Got my Dad into a couple nice fish this morning. 30 and 32 lbs. In a tournament tomorrow with G3. Hope we can find them again. 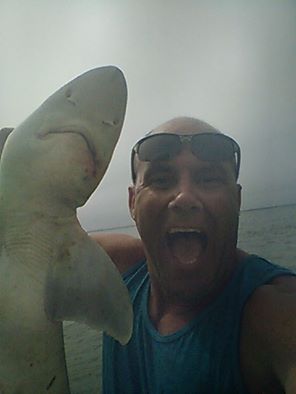 Memorial Day weekend in Beach Haven produced beautiful weather, and the captains of the Beach Haven Charter Fishing Association were able to take advantage of the weather and the fishing.

Before the weekend started, the Captain Carl Sheppard had the “Star Fish” out for black sea bass, and they had all the action they could want. Over 80 were boated with 14big ones going home in the cooler. Captain Carl had a birthday group out on Saturday, and the group trolled for a while before finding some diving birds and big bluefish under them. The action got so furious that it was difficult to fish all four lines at once. The crew returned to the dock with a cooler filled with 8-12 pound choppers. Another day Captain Carl and first mate Marlyn had the Allen family out for a day of wreck fishing. They had plenty of action on throwback sea bass and returned home with 7 nice sized black sea bass.

Captain Jimmy Zavacky fished the “Reel Determined” in the LBI Striper Cup sponsored by the Beach Haven Marlin and Tuna Club. Although his crew was not able to take home any prizes, they did weigh in a pair of nice sized stripers in the 30-pound class. The caught the fish on the troll.