This somehow represents a three-day weekend ...

Friday, July 31, 2015: How sweet it is … It is gorgeous out there and as fishing-friendly as any day this summer. The humdidity is way down and the light land/sea breezes will blow out any colder and dirtier upwelled water from the beachline.

I’ll honor today with a plugging trip to BL New South Jetty. I have to admit I don’t always report my own fishing trips because there is this odd and, well, bitchy component of our sport who get pissed off real easy. Ya think!? Even if I report on just my angling, I get accused of “burning” a site. Not long ago I barely mentioned being over at The Dike and I got hell and high water from folks accusing me of attracting people to the site. 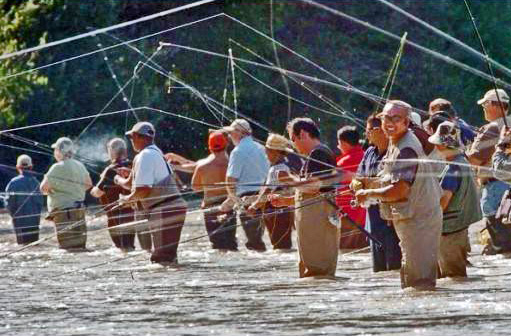 But it’s too nice of a day to get overly consumed by the dark side of anything. Just getting out there – be it boat, rocks beach or lakeside (freshwater) – is worth the effort … even if the fluke aren’t overly cooperating and the black seabass season is slamming shut until Oct.

You'll see a photo below of a doubleheader fluke from the surf. Surfside flattes make total sense as the bay warms to uncomfortable levels for fluke. I'm also hearing about large numbers of baitfish in the swash and near jetties. That has me thinking that spearing -- coupled with squid or GULP -- might be great for shorter casts. Jigheads and squid or GULP work better with longer/harder casts.

FLASHBACK: Many years back, I used to fish for surfside fluke using a brandname Rat L Trap ... and it was killer -- a little too much so. The trebels on those buggers are small and ferocious. When a fluke inhaled one it was nigh impossible to unhook it (harmlessly) or before suffocation set in. I always meant to re-hook a Rat-L-Trap with single hooks; not sure if that would alter their classic swimming action. 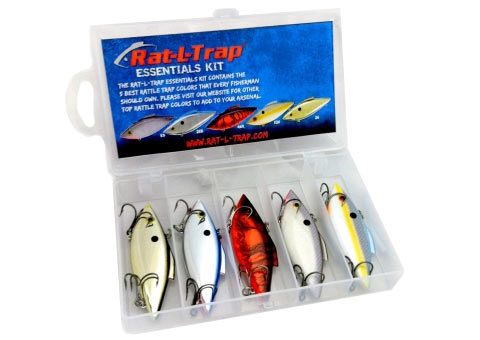 MAHI MEANDERINGS: I was asked a question about small-crafting out far enough to get some mahi on the troll. I know for a fact it can be done down off AC -- at the pots.

As to heading straight out, off BL, it’ll all come down to how far you’re heading east and how good your binoculars are -- and a floating bridge wouldn’t hurt. When mahi hunting, you’ll be looking for any bit of surface debris or flotsam. It doesn’t take a very large piece of surface junk to attract mahi … small mahi, that is. 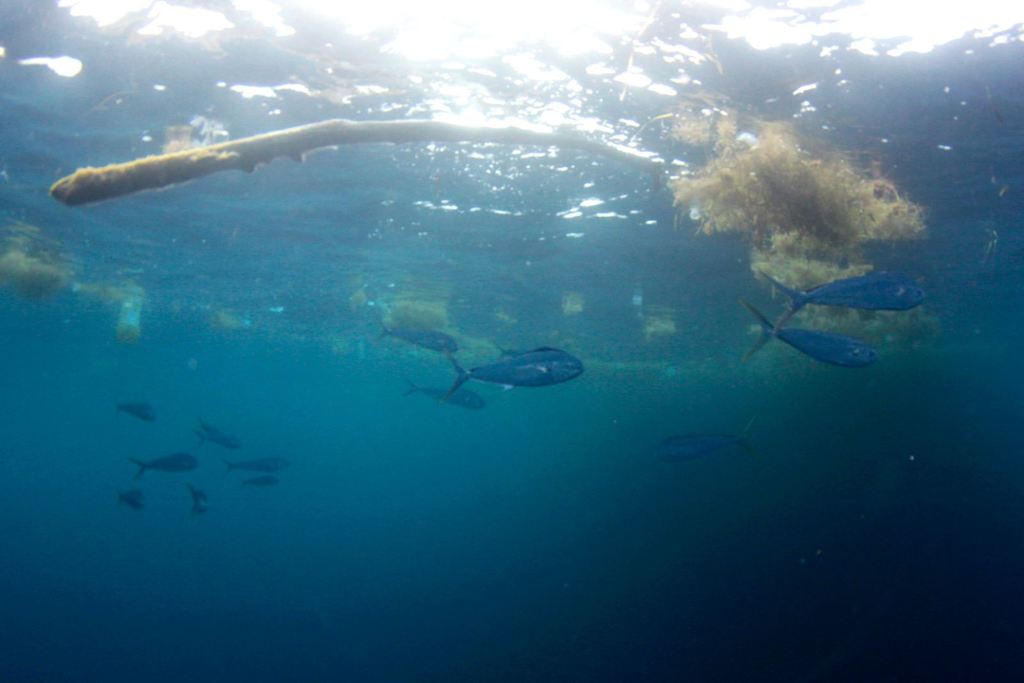 One time, offshore, there was a piece of clear plastic, maybe four foot by four, bobbing about, covered with barnacles. The damn thing had an entire school of mahi suspended under it. The school was 20 times the size of the flotsam.

panexplore.com:
"... mahi enjoying the shade beneath. In addition to our trawl sampling, we are accumulating quite the collection of larger plastic debris!" 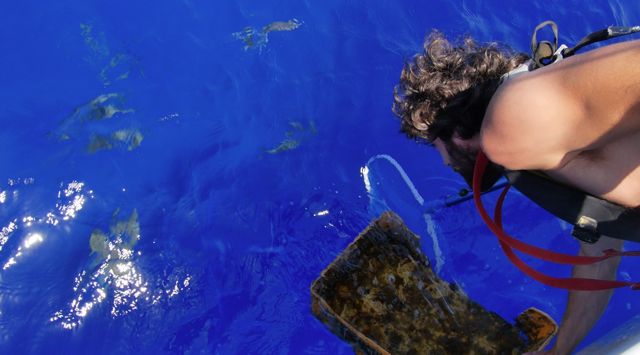 The oddest nearshore mahi catches I’ve ever seen came via my buddy Walt P. He caught small ones while anchored off the North Jetty, chumming grass shrimp for tog and stripers.

Mahi is one of my all-time favorite BBQ fish, however, they’re inordinately prone to, well, decay, as in rot -- developing histamines. Mahi must be cleaned and fridged – or frozen – in nothing flat. They can’t be left in the sun for even a short time. I would strongly advise against sushi-ing mahi unless you know for absolutely certainty it was just caught.

Just to prove I’m not overstating the tendency for mahi to go bad in nothing flat, there is actually a type of histamine fish poisoning called mahi-mahi flush. I kid you not. And mahi-mahi flush doesn’t kid around either. It can be bad, as in deadly.

This is not to overly single out the mahi, since histamine fish poisoning -- once known as scombroid fish poisoning – can occur rather quickly with the likes of  mackerel, tuna, marlin, swordfish, albacore, bonito, skipjack, and almost 100 other species. It just comes on a lot faster with mahi. Interestingly, another hyper-fast rotter (my term) is bluefish.

I promise I’m not trying to scare anyone but these are the symptom of histamine fish poisoning: skin flushing on the upper half of the body, rash (mahi-mahi flush), sometimes severe gastrointestinal problems and a throbbing headache. It is very similar to a critical allergic reaction. 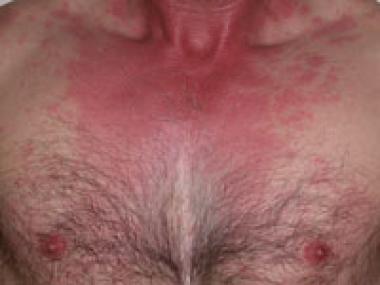 I can point to those delightful symptoms as a way to refute sickness that people too often dub as fish poisoning. In many cases, “fish poisoning” is actually unrelated to food poisoning, the later coming not from histamines but from food contamination or unsanitary conditions. Food poisoning lacks the skin flushing, rash and throbbing headache. 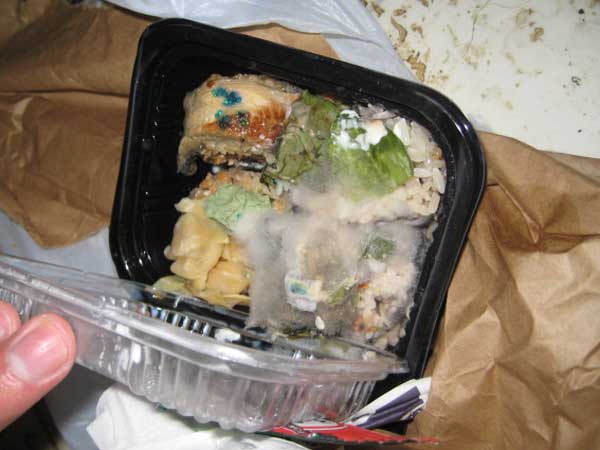 By the by, histamine fish poisoning is easily and definitively identified in urine exams.

Wow, I just lost my appetite.

Well that 'tournament payout' of $50K was awarded - congratulations to Ray Rudick of Staten Island for a 13-pound money winner last Saturday. While there are plenty of doormat opportunities around this weekend, the big news is big wahoo jumping on spreader bars and trolled Stretch & Rapala X-Rap Magnums. Latest video forecast for NJ/DE Bay region is at

I've looked at the weather and tonight's (and tomorrow's) blue moon cruise is going to be sweet!!!!

MISS BARNEGAT LIGHT FULL MOON CRUISES. TONIGHT AT 830 AND EXTENDING IT TO SATURDAY NIGHT TOO
Due to last night's weather we have added August 1st Saturday night Full Moon cruise. Come join us to see the BLUE MOON no reservations. Just come aboard. $12 per person. 18th Street. Barnegat Light. 08006 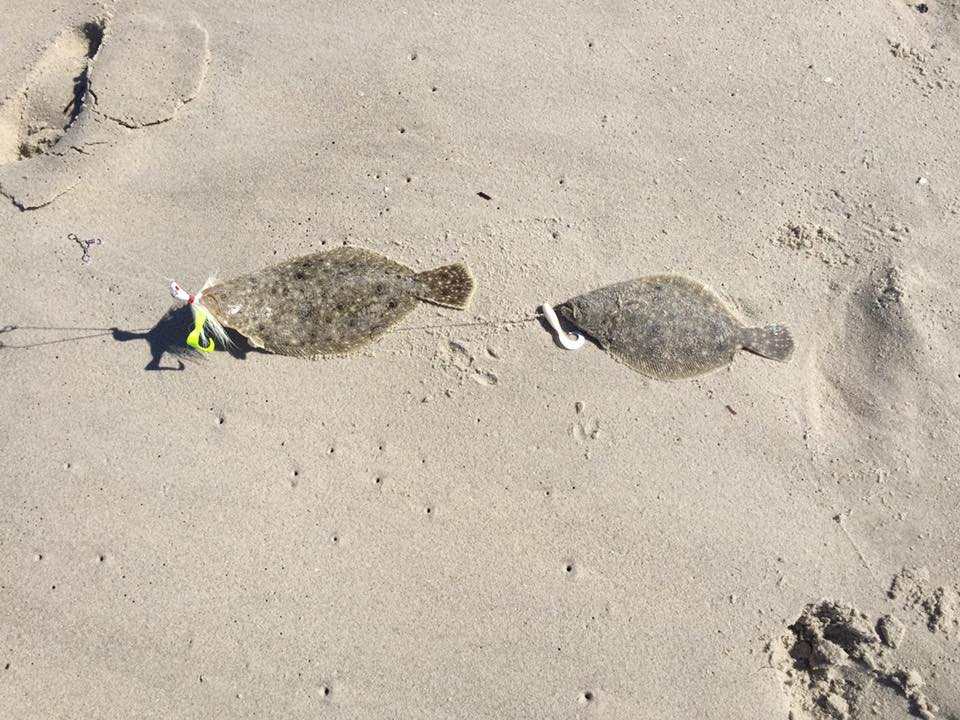 US Senator Maria Cantwell (D-WA) introduced a bipartisan bill that would offer investments for adaptation and mitigation research to understand how to make coastal economies more resilient to the threat of ocean acidification.

“Ocean acidification will have a vast impact on commercial and environmental conditions across the nation – and currently threatens jobs in Washington State.  Shellfish in the Pacific Northwest have already been negatively affected, but we don’t know yet what this means for salmon populations and larger coastal ecosystems,” said Cantwell. “This bill ensures that NOAA is making the appropriate investments in research, and monitoring the ongoing impact of this threat to our coastal economies.”

In 2010, Cantwell secured funding to acquire and deploy ocean acidification sensors near major shellfish hatcheries in Washington state. Today, these sensors have been integrated into NOAA’s national ocean observing program—the IOOS program. These sensors allow shellfish growers to monitor ocean acidity in real-time and close off their shellfish rearing tanks when ocean acidity is too high. Cantwell also has previously highlighted why additional research is needed to understand ocean acidification’s potential damage to critical salmon food sources – including small crustaceans.

Cantwell’s bill would also improve coordination between ocean science and monitoring and the National Weather Service, which is vital in the Pacific Northwest where nearly all of our storms originate offshore.  Lastly, the bill authorizes a program to measure and share marine sound.  Monitoring sound in the marine environment is important so we can understand the impacts on Southern resident orcas and other key species. Fishing with a remote controlled boat.

You can easily buy them now ... 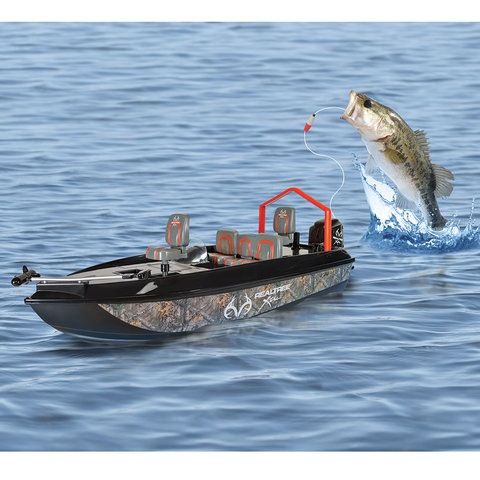 Aguadrone brings fishing into the 21st century, but is it cheating? 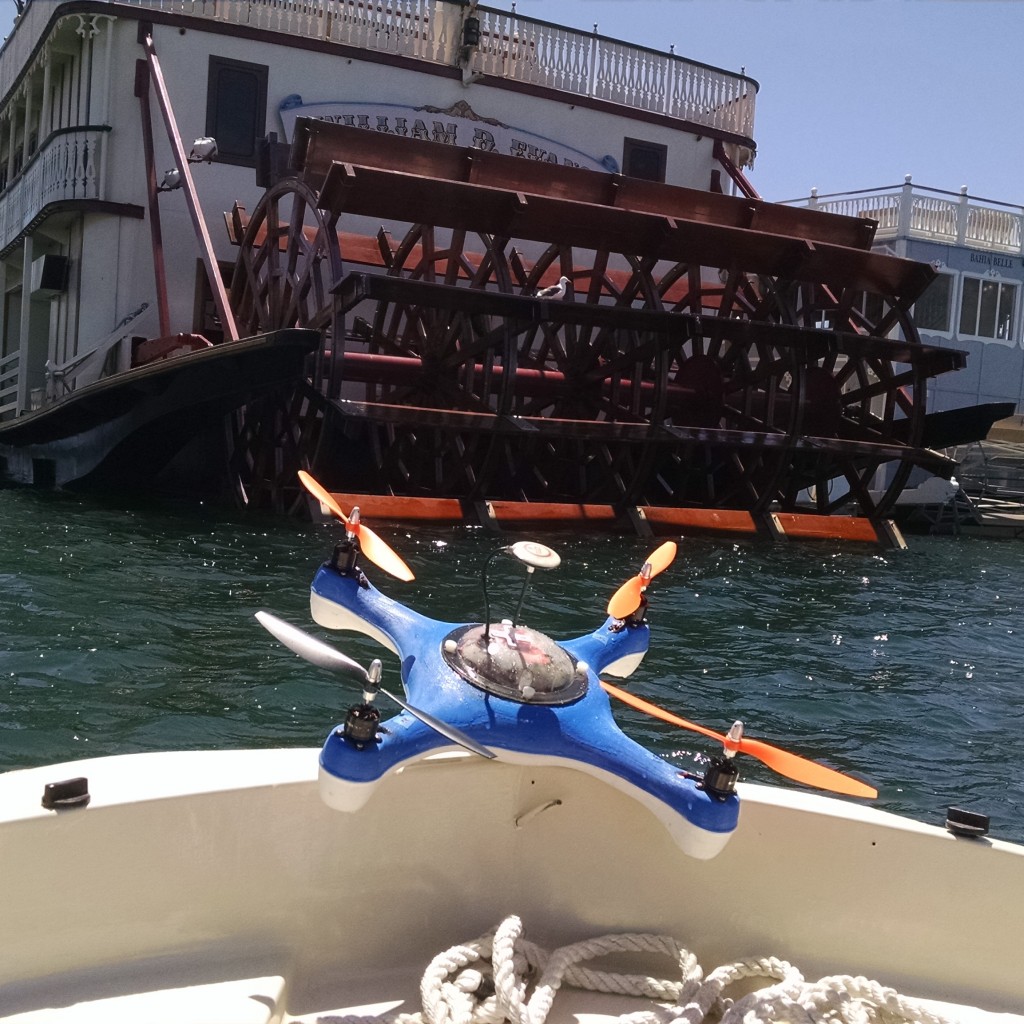 The Aguadrone can be launched from just about anywhere, including a boat. Photo: Courtesy of Aguadrone

The Aguadrone, currently seeking funding via Kickstarter, is billed as the first waterproof drone, and it’s available with rad options like a sonar fish finder as well as a pod that can deliver your bait farther than you can cast it. In other words, the Aguadrone lets you find out where the fish are and helps you deliver your bait to that place.

“You’ll find where the fish are biting. You get to spots that you can get to without your rod,” says Daniel Marion, creator of the Aguadrone, outlining the benefits of the unit.

Which is really cool. But is delivering the latest technology to one of the oldest practices of acquiring food cheating or awesome? More on that farther down.

Fishing for the touchscreen generation? Image: Courtesy of Aguadrone

Marion’s not new to cutting-edge tech. He’s been fascinated by flying objects remotely for the past half century, since he was 10 years old. (As a kid, he won a drawing contest and his prize was a toy plane controlled by strings and a rod.) And fixing things? He’s been a natural since day one. As a child, his siblings intentionally smashed their transistor radios so they could watch him put them back together.

Fast-forward to 2011 and Marion is the proud owner of two fishing-tackle shops and a roofing business. He also holds three patents: two for fishing products, one for a roofing vent. One day, Marion looked at the drone he uses to inspect some of his roofing jobs and had his eureka moment: a drone could help his angling.

Marion soon started designing a waterproof drone with removable pods that can be switched out, including a fish finder and a line-flier pod that will fly your bait past normal casting range.

The Aguadrone in action at the San Diego River. Photo: Courtesy of Aguadrone

Those design dreams have been realized, and if his Kickstarter is successful, these products will soon be available to the public at large. The least expensive product is the two-pod option, for $399.

Here’s how it works: The pod with the fish finder has sensors that activate when they hit water, turning the device on. When the drone takes off, the pod turns off, saving battery life. No cell service is needed; the unit has its own Wi-Fi that connects to your phone.

Flight time is 14 to 18 minutes per battery — saving boat fuel as well as time spent hunting for an active spot to cast.

The line-flier pod is great for fishermen who want to deliver their bait farther than they can cast it. Marion recently used it during a shark-fishing trip, where it delivered 2-pound mackerel.

Marion says he needs the Kickstarter funds to pay for the injection molds. All the drawings and tech are complete.

Using the line flier has helped Marion’s fishing in the San Diego Bay because he can get his line to areas fishermen who are just casting can’t. “We catch a lot of big halibut,” he says, and he claims he’s definitely catching more fish than he was without it.

To drone or not to drone is a question you’ll have to answer for yourself. The folks at Field & Stream published a great read on the topic. And one drone is actually helping pull fish. But it’s tough to not bristle when thinking about the serenity of the great outdoors being interrupted by the white noise of a flying object.