Upon hearing that he'll be wearing this for at least the next month ...

Friday, July 15, 2016: It was open-mouth hot out there this a.m., as the sun beat down to where it almost hurt the face. Then came a wonderful midday cloud bank that didn’t totally kill the heat but took the bite out of the rays.

And it’s not like we’re going to be rolling in coolness any time soon. I finally got some time to mull over the weather computers and I see near-90-degree daytime temps on a daily basis right through all of next week. Per tradition, LBI will be a solid five to 10 degrees cooler since much of the hot-air pump from the south will have that essential easterly component right along the beach – and right off the ocean.

One complicating factor for our beachline could be the intensity of any SE winds. We’re in the upwelling season. It doesn’t take much to blow away the top layer of water and draw up the much colder deeper down water. It’s hard to imagine but there is still water chilled from last winter ready to surface if wind push comes to shove.

I see where some local media wrote about that oddly tropical looking water along out beaches last week. There was an interesting satellite shot showing the break-away eddy of warm, algae-hued waters. As I wrote yesterday, I’m all fired up for some morning masked swims to see what’s down there. So I walk up there today and the water is totally turbid; the clarity is who-knows-where. It will return though.

I had an email asking if the replenishment might be why the brown sharks are being caught so regularly in close to the beach. Could be. The ecosystem response to replens is not well known. In a way, it’s breaking new near-in ground as we speak. Yes, there is some ecological monitoring associated with the project but as to the intricacies of how all our fisheries are reacting to finding the Island’s beachline looking like nothing they’ve ever seen before? That would take an army of scientists, planted on the beach, just to scratch the sand surface.

Surf anglers are, vicariously, some of the only on-scene researchers. If the water clears again, I’d like to do maybe a mile swim, just off the beach. I’m hoping my GoPro lookdowns might have some scientific usefulness … in a raw data way. I’m targeting Brant Beach for dive-swim since that’s where brown sharks are being taken. I can’t imagine I won’t see a couple, especially if I use a bodyboard, which doesn’t spook them as much. Hey, in general, sharks spook just as readily as far less apex-ish creatures.

Below: An interesting bodyboard. 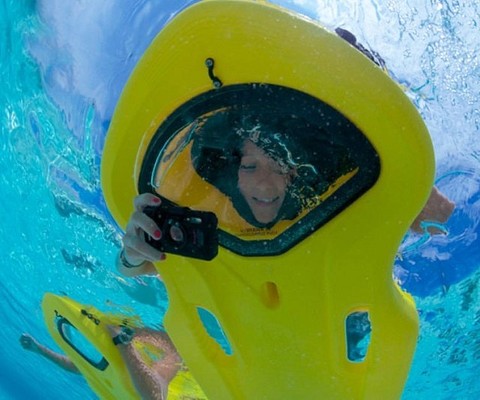 I was also asked by a Facebook gal if brown sharks are edible. I explained that’s a no-no question. You can’t eat what you can’t legally keep. Admittedly, I did legally try brown shark steaks back in the not-that-distant day.  They are above-average tasty. They’re not quite mako-licious but better than much-marketed black-tip.

I’ve also eaten --- way back, San Fran – shark fin soup. It was nothing I couldn’t duplicate by throwing a meaty fish rack in some boiling water. Though, as you likely know, shark fin soup is supposed to instill the slurper with the manly stamina and spiritual essence leaking out from within the shark’s fins. Whadda buncha voodoo crap. THANK-YOU, FLIPPER: As we immerse ourselves in the height of shark season, check out this heavily-viewed, somewhat low-quality video of a bull shark bite on a 13-year-old male surfer taking part in a Florida surf contest.

If you’re hoping to see a load of blood and guts, it doesn’t happen. It gets far more interesting than that.

While the bite itself is not caught on camera, an utterly astounding post-bite return visit by the circling shark is clearly seen -- as is an heroic dolphin, seemingly moving in to prevent what would likely have been a full-blown, follow-up attack on the surfer.

The first part of the video is the surfer ripping small waves. Then comes a bunch of explanatory graphics. Feel free to watch and read the entire video but the most amazing looks start showing at 1:48. See photo. 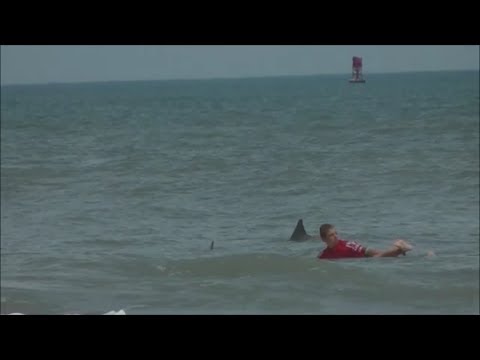 I’ve carefully looked at this piece of video. I instantly realized the larger fin, closest to the boy’s side, is a dolphin. However, the fin barely showing off the nose of the surfboard is a shark. What’s more, the dolphin’s dorsal fin, by my read, is clearly in a hunch-backed attack posture, often seen when dolphin prepare to ram a shark.

While the video-maker offers doubts about the intent behind the dolphin’s actions, watch closely and you can easily envision the juxta-positioning of the dolphin and shark underwater. The dolphin is clearly intervening; butting/driving the shark away from the surfer. Obviously, the dolphin's intent is anyone’s guess.

When you see the final photo of the young man’s leg, there is no doubt it was a bite-and-release by the shark. The wounds are relatively superficial. However, the dimensions of the bite indicate it was a large enough bull shark to rip his leg right off had it gone into a serious head-shake attack – which it might have been getting prepared to do. Why else would it have been stalking the surfer?

By the by, there is apparently a significant difference between a shark “bite” and an “attack.” In fact, this incident might be a perfect example, as it shows a bite – sometimes even referred to as an “accidental bite,” mainly by shark conservationists. The “accidental” part comes from the belief a shark simply mistakes a human as prey – and does a quick taste-test. Realizing it isn’t a seal, or some form of  desirable seafood, the shark rinses its mouth with saltwater and moseys on.

I recently put up a video showing a “pet” grizzly bear suddenly slapping around a lady in a chair. She was shaken but uninjured. That relates to accidental shark bite in the famed “Had it really wanted to …” aspect. The difference in the case of this surfer was the fact a bull shark is quite possibly the most unpredictable creature out there. I’ve long said that all bull sharks are psycho, in human terms. Knowing how sane dolphins tend to be, they might ram the s*** out of any shark acting overly freaky. But, then again, in the case of this young surfer, it might be because dolphin might kinda/sorta like humans. OK, so maybe I was brainwashed by summer reruns of "Flipper." 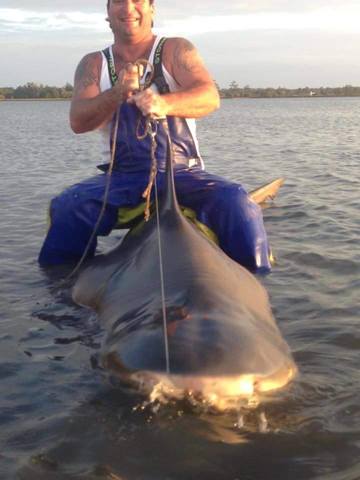 Below: For whatever reason, the massive bull sharks far up the Zambezi River in Africa pose absolutely no threat to humans. A highly adequate nonhuman food supply might be the reason, though I wouldn't rule out the complex water chemistry in the river. Bull sharks mellowed out by "magic waters"? Hey ... 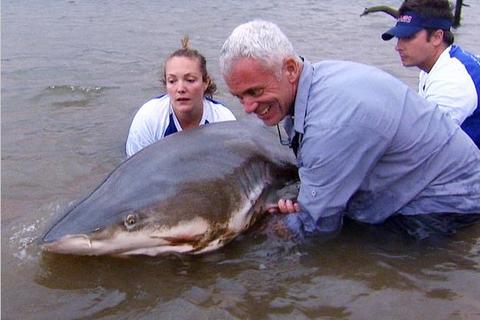 Below: I recently wrote about a shark's two-jaws working in tandem. Check this out to easily see the two-step eating process ...

Below: That bear slap I mentioned above. Notice the trainer is wearing a karate gi. He'll be able to quickly put that bear in it place with a quick karate chop or two. Yeah, right? What a moron. Somebody should bitch-slap him. 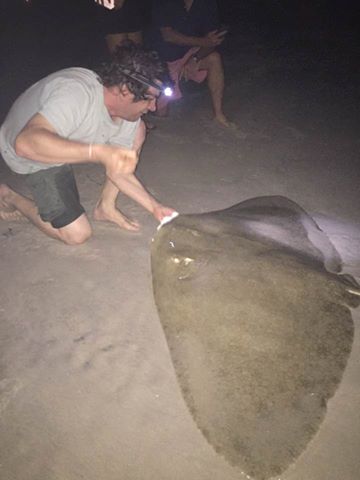 took my manager brad sands surf fishing tonight and landed the biggest sea monster i've ever hooked from the surf. my brother in law john swenson came walking up during the battle and ultimately we did the hand off. wingspan over 4 feet! ----------one more addendum to this--i purchased fresh bunker for bait from my dear friend margaret at jingles bait and tackle in beach haven and i have a lucky jingles fishing shirt that i only wear when my game is on max! tonight i wore it and added yet more history to it! us fishermen are a superstitious breed---------