The new Google fish APP: "OK, I have a fish on and line is going out real fast ... Should I start reeling in?" 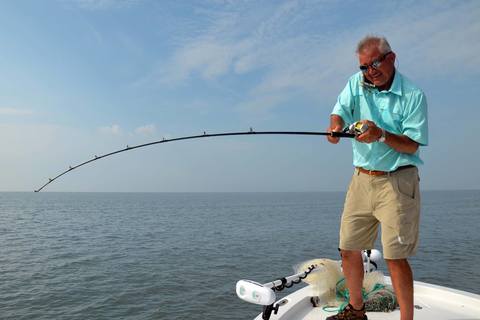 We will be eating like " Kings" tonight! First kingfish of the season! BL 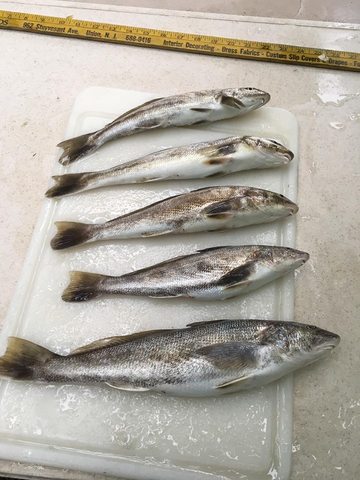 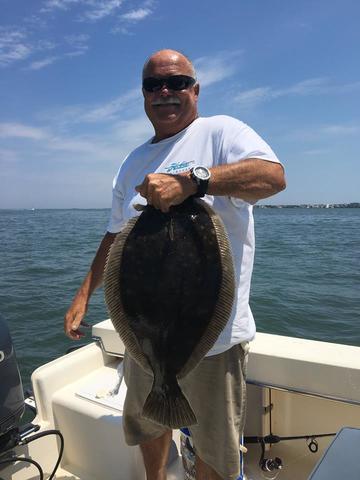 Bud with a 25 incher caught on the upper pink buck tail with a minnow. Bud's fish weighed 6-11 and was caught in the bay,

Friday, July 08, 2016: Only once in a rare moon do beach conditions come together like today, offering a look of tropics-like perfection. Here’s a video look. You can see by how clearly the submerged jetty rocks are showing here in Surf City that the water is nearly immaculate.

Those aesthetics don’t play all that well with angling, especially the low winds, which keep fluke drifts down to minimum movement for boats. By late-day, the southerlies should really kick in – and kick up some T-storms.

Ocean water temps are nearing mid-70s in some areas.

The bay is going to get a tad too toasty for the likes of larger fluke, though smaller flatties handle the heat much better. One has to think the cooler-temp inlet area will be getting flukie real fast; that includes inlet-related zones, over toward the conversion zone of the creeks inside Barnegat Inlet.

Beach fluking is a struggle but I can’t help but notice the folks who know the ropes do way better at besting better flatties. Another trick to improved fluke-getting is using jigs, especially with white leadheads hosting squid strips or GULP equivalents.

Below: If using your wife's sewing scissors, it's highly advisable to rinse them insanely well. 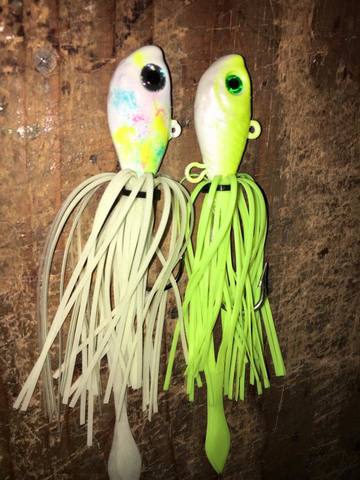 A simple but always-effective drift rig. Use in the surf with bank/cushion/egg sinker and a steady retrieve. 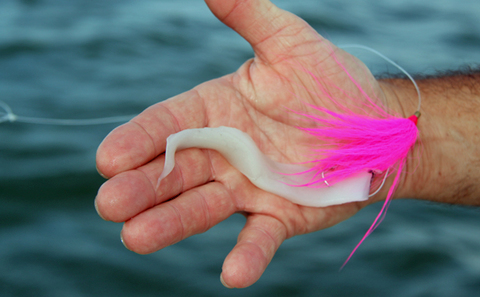 Jigging works well because it covers much more bottom area, as opposed to chucking out bait and pinning it to one spot on the bottom. If you’re going to go the bait route, at least use a bank or cushion/pillow sinker to allow the bait to explore a bit. If you’re from down south, you usually go with the egg sinkers, which work very well.

Below: Cushion, bank and egg sinkers. 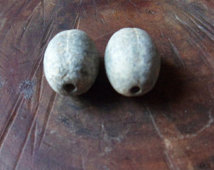 I recently noticed in the seafood section of the supermarket these small, appealingly packaged, frozen squid. These were tiny and would make an exceptional one-piece fluke bait. 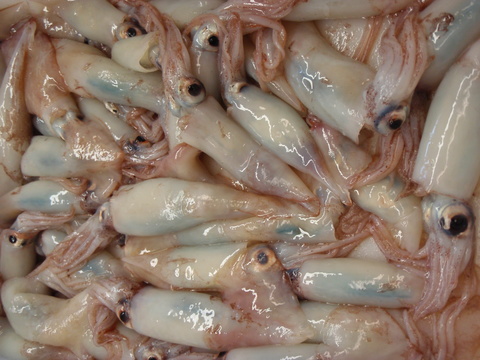 You can fillet one onboard fluke to use as bait, providing you keep the wrack to prove it was a legal-sized fish. Wrack missing? Pay the piper when checked by Fish and Wildlife. 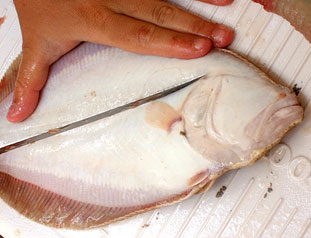 Fish Monger II Fri 7/8 Fluke Early Full Boat Limit (9man) +++ to 9lbs - Red hot fluking continues!!! Absolutely punished the fluke today.... no drift no problem bc when u got on a pile of em u just destoyed em. Good as it gets with mutiple fish on at a time n Guys with quick limits. Charter limit by 915. Including Smiling Bob's 9lber for tops on the day. Bob bates had runner up with a couple of 8lbers. Nice quality fish again today. Mostly 3-4lbers. Leave the spearing n killies home gulp n jigs getting it done... Hh was Henry with 12 (orl) finished up a boat limit and threw back a bunch of very lucky keepers b4 calling it a day. Thanks again guys!!! 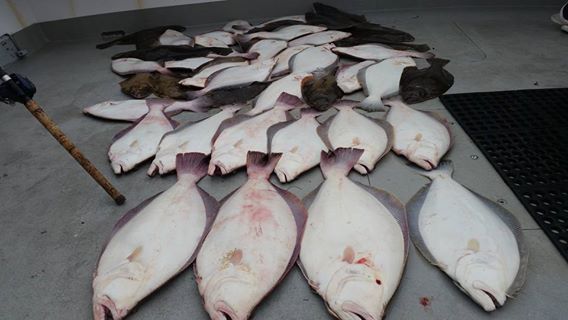 IBSP has begun to show some panfish action. Kingfish are scattered about. Interestingly, you can get kingfish from kayaks near the beach but seldom from boats any further out. Worms and fake-o worms on small-hook float rigs work well, even off a yak. 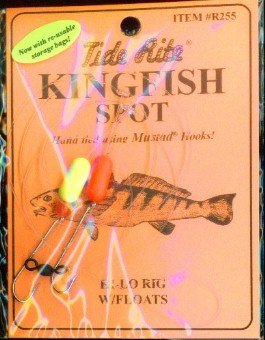 Here's a photo from my new toy, using a friendly target. From a fishing angle, it'll help  at the Holgate point, to see if anyone within eye-shot is hooked up in the dark. Back in the outback, i can finally get a real-time look at the backyards of those folks asking me if coyotes are eating their pets. Yes, the likes of owls ... which will grab a small cat or dog in an instant ... Flir up. 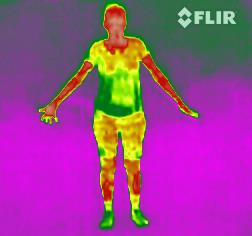 I was a tad surprised to see these in my neighbor's backyard in Ship Bottom -- though I've had my suspicions for quite some time now. Ocean Eagle porgy fishing had a couple of surprise guests....TRIGGERFISH!! First 2 of the season. Fishing wasnt' as good as yesterday, only a couple of jumbos bit ton of current/tide didn't help. I had a great day, fished with a group of 12 and showed them how to catch fish, a couple of them were getting them one after the other buy the end of the day. And my fishing buddy for the day w as Pheobe, 9 y/o who was scared to touch fish in the morning, and was holding up dogfish for her Dad to take pics. Really a lot of fun today, will be back at it tomorrow on the OE.

Fresh and frozen Mahi prices are tracking at above average levels this summer as inventories in the US market are limited with overall imports below the five-year-average through May.

According to an Urner Barry average of frozen 3 to 5-ounce Mahi fillets and 6 and 8-ounce portions, prices in June climbed to at least a four-year high around $5.75 per pound. The price is up 17 percent from a year ago.

Fresh whole mahi prices are also trading at seasonally higher levels compared to this time last year. An Urner Barry calculation of average fresh Mahi prices for 10-15 pound whole fish out of Miami in June was up 21 percent from the same time last month at $6.21 per pound. That’s the highest price in this market since last July.

Current mahi market conditions are the result of tight US inventories given a decline in fresh and frozen imports from this fishing season.

Overall mahi shipments to the US market during this year’s fishing season are notably down from the five-year-average. Frozen imports are off 14 percent at 27 million pounds while fresh shipments are down 16 percent at 9.9 million pounds.  Both figures are lower compared to the 2015/16 season.

Reports indicate the mahi season in Central and South America was affected by the El Nino weather pattern. An increase in natural bait fish stocks in warmer waters reduced landings from major suppliers.

Mahi landings generally decline in the second and third quarters of the year before the fishing season restarts in October. This means there is little inventory relief expected in either the fresh or frozen markets for the time being.

Average mahi prices in July are already trending higher from June levels. However, the last time the mahi market climbed into $6 and $7 per pound territory in late 2011 and early 2012 was when the item priced itself off restaurant US menus for months.

This weekend we will start running to Barnegat Ridge for bonita and albacore. There is a chance we could encounter bluefin tuna as there is very clean water inshore already and while I try not to report on other boats efforts, it seems the rumor mill is churning with tuna there. Running Open Boat trips to Barnegat Ridge Sun and Mon, July 10 and 11. 6AM to Noon. $175 person. 3 people max. All fish are shared.