Friday, January 27, 2017: This cool coolish weather has made for fine walkabouts in the woods;

About 150 fishermen showed up in Point Pleasant today for the event, as NJDEP Commissioner Bob Martin says "enough is enough," vowing to fight the proposed fluke regulations to the bitter end! We'll have more from The Fisherman Magazine in the coming days!
— at Fishermen's Supply Co. Friday, January 27, 2017: This cool coolish weather has made for fine walkabouts in the woods; which, for me, includes dig-abouts – in search of a treasure so big I’ll never have to dig another. Of course, what fun would that be: no longer hearing the gently Siren’s call of buried treasure the way I do now. The upside to being a non-millionaire treasure-seeker is I get a rush from finding even entry-level goodies. Part of the finding fun-factor is trying to figure out what certain dug item are. For instance just today, despite a very slow dig,  I dug up what I can only roughly guess is a very old oil filter. But, then again, it’s not. It’s heavy as all get-out, solid brass, with a see through middle, much like older filters. But it also has to protruding pipes which also have glass windows. At the bottom are, seemingly, valves to control inflow. This like days back over 80 years, based on other item dug nearby. Maybe you can ID it. 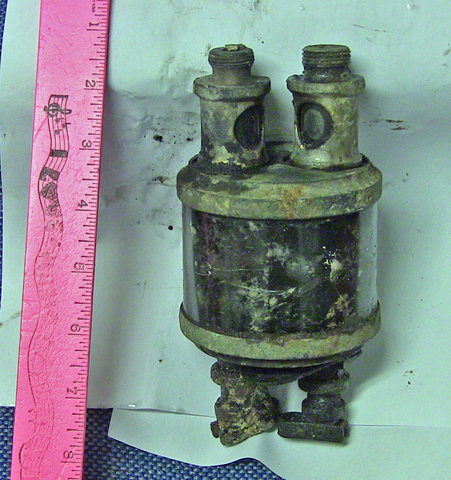 I’m awaiting further official word on what’s to be done with our eaten-away beaches. The erosion is downright freaky looking in some areas.

Although the taken sand is returning at a remarkable rate, the dunes were dissected in a couple towns. Erosion that acute seems to demand some action be taken.As I've noted, mechanical repairs are already underway, though I want to waiting official word from various towns on what their plan are before I publicize.

I'm hearing the typical "All the sand is gone, what a waste" drivel. First of all, what if it hadn't been there? Ocean water coming down the blocks? Not impossible. But can't folks just wait a bit to see how things pan out in weeks to come. That's how we used to do it when living along a stormy shoreline wasn't perpetually over-dramatized.

(Tomorrow I’ll be offering a diatribe on the abandonist angle on the recent blow. Maybe I’ll cool down a bit by then … though unlikely.)

SCALLOP PHOTOS: Were you one of the many beachcombers who came across washed-up live sea scallops? If so, send me a pic, please.

From what I’m hearing, these were big-ass sea scallops.

I once again get to use a line it took my a long time to earn: “I’ve been here over 50 years -- (fill in the rest). In this five-decade instance, I never once saw sea scallops wash up, en mass. 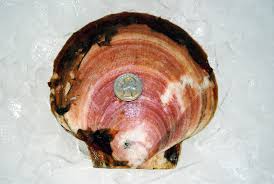 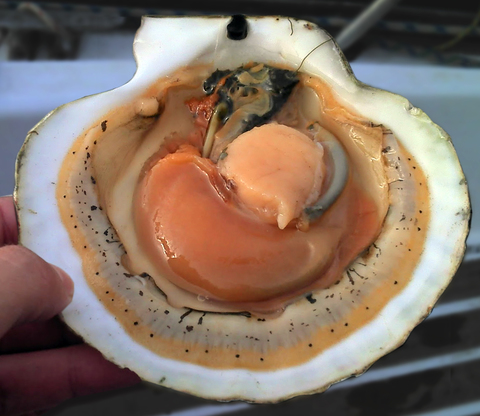 That assured, I once grabbed enough live, washed-in lobster to fill me and friends with tail – and plenty enough left over for days of bisque. Some fishing folks might recall a slew of stunned shad swimming ashore one spring, likely lost from nearby net fishermen. More alarming, was the insane fluke wash-up back in the 1970s. But sea scallops … arguably the most valuable legal seafood out there? Where was I? Hey, I have my senior shellfishing license so I can pick them ... up off the beach.

What other seafood item is more pricey? The highly-illegal surgeon caviar. (Can't include elvers.) 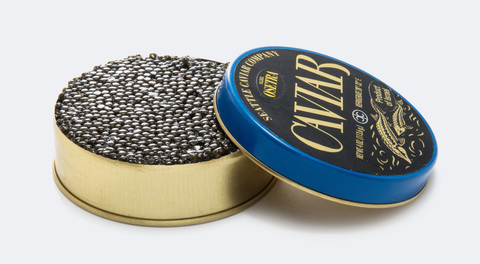 Raise you hand if you're adding to the demand ... Demand is high for octopus in the US and other major markets since its versatility in the kitchen has made it one of the emerging items in the seafood industry.  Like oysters, octopus has become very popular with millennials, and is increasingly found on small plate and tapas menus, as well as becoming mainstream as an appetizer.  One of the great things about octopus is that people who eat it like the fact it looks like a sea creature.

Mike Daniels, VP of Operations and Sales at Seaport, says "Octopus is used in the poke application and is popping up in poke bars in fine supermarkets , fast foods outlets etc across US and especially west coast. It is extremely popular with millennials who can build their own poke cups or bowls and have fresh ingredients with no waste or leftovers and have tons of variety.  Tako, or wild cooked octopus, is gaining popularity big time as a preferred sushi item in US  and is higher priced, but even the Philippine and Indo raw octopus can be cooked and prepared for poke apps as well." Urner Barry prices for Spanish octopus are strong. Part of this is because the US is not the top market for octopus sourced from Spain. The US trails the EU and Japan for influence in this market. Sources peg the share at 85 percent for the EU and Japan and 15 percent for the US. Additionally, production from Spain’s winter season, which runs from December through February, is reportedly poor.

Before Spain, the Philippines traditionally served as the US’s key octopus supplier. Here the US does command the market share, accounting for about 70 percent Filipino exports annually. Filipino production was particularly short on octopus 4-6 lbs and smaller, which are the preferred sizes for US buyers. These items are currently commanding premium levels over 8lb and up sized items, which is unusual for this market according to sources.

Indonesia is another notable octopus supplier to the US market but, like Spain, the US lags behind the EU and Japan for market share here. And similar to the Filipino imports, octopus shipments to the US from Indonesia are down 25 percent. Consequently, Urner Barry prices are up with supplies limited and demand strong.

So while demand for octopus in the US is booming, production declines have limited supplies. This is has pushed up prices in all octopus categories in the US for this emerging seafood item.

Looks like a LUNKENHEIMER oiler ya dug up there... lots of variations, steam era stuff IMHO