Friday, December 16, 2016: Hopes your pipes have fared well and are still flowing freely. With winds dying off rapidly today, the freeze-up danger is somewhat lessened. Now we’re in for a monumental change. From the teens into the mid-60s in nothing flat. That yo-yo thing will continue into the foreseeable weather future. I’m still taking ocean temps near 50. Any onshore winds, like those from a nor’easter will melt any chance of things going deep and white. Best chance of snow conditions is what we just saw, anything coming in on west winds. That never amounts to much.

I hit a remarkably low tide for clamming today, Holgate end. Even though the clams have settled in fairly deep for the winter, I quickly got my allowed 150 in this small area of the mudflats: 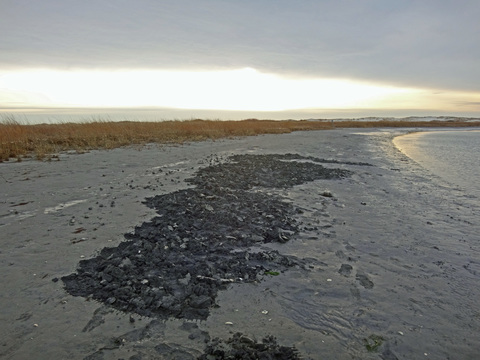 Somewhat oddly, my bycatch of bloodworms was unusually high for cold weather, when they also tend to go down deeper. I’m on the brink of going with bait for remaining bass, though chunks of chowder clam meat also make a fine presentation on a pompano rig. Maybe I’ll go surf and turf … surf clams and bloodworms. Here’s a look at the far-out tide conditions in Holgate today. You need to know that area a bit to see just how narrow the back cut was running … and I left before max low:

SOMETHING FISHY THIS WAY COMES?: I don’t know and I can’t yet imagine. That was my spontaneous response to being asked what effects The Donald might have on fishing. However, I wouldn’t be overly worried on the commercial fishing side of things. There is a high likelihood of the Trumpster favoring commercial over conservational when it comes to, well, all of nature.

While having a business-brained bully at the Whitehouse pulpit might seem a boom to the commercial fishing business, we have all seen the speed at which a resource can be unroyally ravaged, even annihilated – killing an industry faster than regulations ever could.

I do see a trend to less federal control of fishery management. Interestingly, that doesn’t mean states will obediently fall in line. States can always exceed federal margins. In fact – and admittedly oddly – this entire marijuana legalization thing has shown just how much states can obstinately go off on their own. I deeply fear the new administration will widen the gap between state and federal as possibly outlandish changes are suggested. Even Daring Don’s ongoing promise to erect a “A Wall” along the US/Mexico border could run into disagreement with border states (California, Arizona, New Mexico, and Texas), though the border itself is under the control of the U.S. Customs and Border Protection agency of the United States Department of Homeland Security.

In NJ, powerful fishing organizations could have a huge say in how fisheries are ultimately managed within NJ waters – above and beyond federal say. Of course, as I speak, anglers are vociferously fighting proposed stricter federal regulations on fluke. It could get to where recreational fishermen are simultaneously fighting “too strict” and “too lenient” federal fishing regulations.

Might the federal striped bass harvesting ban in the EEZ be reexplored? Hell, with Trump bulling around in the White House china closet anything is possible/likely. 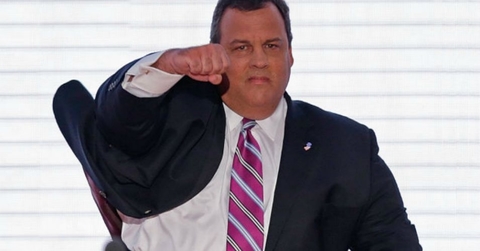 A CALL TO ACTION BY MONDAY A.M.

WHAT IS GOVERNOR CHRISTIE TRYING TO HIDE?

But this week, Gov. Chris Christie and a group of legislators in Trenton fast-tracked a bill to move public notifications to seldom-visited government agency websites instead; sites for transactions, not for visiting to be notified of anything.

If the bill passes, New Jersey would be the first state in U.S. history to allow governments to hide this vital information on their own websites.

But don't be fooled into thinking the simple idea of We can just post them on the Governments websites is innovative.  Many others states have studied public notice laws in recent years including OH, IL, FL, and WI.  Each state concluded there are principled reasons, public notices must continue to be published in newspapers  and on the web.

NOTE: Governor Christie claims the bill doesn't force your governments to stop using newspapers as the independent, third-party providers common-sense requires. They can just do so whenever they're ready, he and others are saying. Exactly the problem. Unlike current law, the absurd permissive aspect of this horribly-flawed bill may be worst of all.

Why? For the first time in the states history, elected officials will have the power to threaten newsrooms and journalists with economic harm should they not provide favorable coverage of whoever happens to be in power, in your town, township, county, etc. Even the perception this could be happening should send a constitutional chill through everyone.

NOTE - They claim its about taking advantage of the Internet, but that's nonsense. Since 2003 all notices have been uploaded to www.NJpublicnotices.com; fully searchable by date, town, type-of-notice, etc. They are archived and secure. They are translatable to over 100 world languages  instantly.

If the bill passes, it requires governments to take over the ad placements for all individuals, businesses and law firms  for free. They have no clue that the business of providing public notice requires much more than a simple upload. The municipalities apparently have no idea what they're in for.

Neither Governor Christie nor the legislature have studied the operational impacts, nor calculated the increased costs governments will incur for taking over this important business  to now be borne by taxpayers.

Governor Christie talks about the declining circulation of newspapers, but doesn't reference the higher audiences also reading newspapers online. He talks about the Internet covering the state, but ignores that the meager web traffic of government websites is for transactional reasons at that not at all about the necessary notification.

You just need to look to Michigan to see what will happen. Just last month, the same environmental agency behind the Flint, Michigan water crisis found itself embroiled in another controversy because it posted on its website a legal notice about a private water grab that nobody saw for 42 days until a local newspaper reported about it.

Please, call your legislators to let them know that government secrecy is always wrong, and that A4429/S2855 is a bad bill for which they must vote NO on Monday. Scientists Unsure What Killed Tens of Thousands of Herring: 'A Bit of a Mystery'


HALIFAX--Scientists remain baffled by what has caused tens of thousands of dead herring to wash ashore along Nova Scotia's southwestern coast, despite a battery of tests.


"What it is, is a bit of a mystery,'' said David Whorley, director for Fisheries and Oceans Canada in southwest Nova Scotia.


The first sightings were reported late last month along the eastern edge of St. Marys Bay, and more dead fish were later spotted on beaches in the Annapolis Basin and farther west, near Pubnico, N.S. There have been no major sightings in recent weeks.


"We've made some progress and have ruled out a few things, but we haven't found the actual cause yet,'' Whorley said in an interview Wednesday.


The tests have produced negative results, including the fact that no infections or infectious agents have been detected in the small, silvery fish.


As well, Whorley said examinations of the herring have failed to find any obvious signs of damage, and molecular testing of tissue samples showed they were clear of some types of viruses and harmful bacteria.


More testing is on the agenda, he said.


The Canadian Food Inspection Agency, for example, is looking for toxins caused by algae, and for the possible presence of domoic acid _ a toxin sometimes found in shellfish.


"The fact that (the testing) is coming up negative is good news,'' Whorley said. "Some of these are nasties.''


Among other things, the herring don't appear to have infectious salmon anemia, a viral disease that can wreak havoc in open-pen fish farms. Testing has also ruled out infectious pancreatic necrosis and hemorrhagic septicemia.


Earlier speculation had suggested the herring could have been driven ashore by whales or other predators, but three surveillance flights have failed to spot any large mammals along that section of the coastline, Whorley said.


"We continue to monitor areas in southwest Nova Scotia for any other incidents.''


Pollution and parasites have also been mentioned as possible causes.


People should report any sightings of dead herring, but they should refrain from collecting samples, as a precaution, he said.


Local fishermen have said they can't recall seeing herring wash up on the beaches in such large numbers.


Herring are known as a forage fish, which means their large schools play an important role in feeding whales, seabirds, seals and larger fish, such as cod.