While in Denver, wildlife becoming hooked on pot seeds have become problematic: 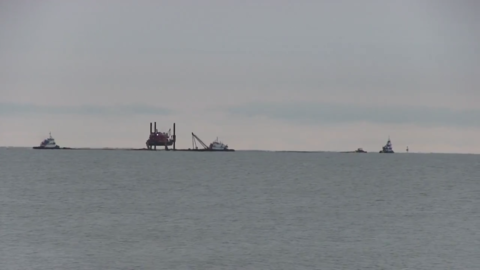 The pumping is about to begin down Holgate way. But where will the channel be?: Video ...

Friday, December 15, 2017: There are small bass to be had in the surf. Not many folks fishing but those who are, throwing out bait, have not only had schoolies showing but one fellow had two 28-inchers – both 28 on the nose. Talk about perfect eating size. The one I saw was also quite plump. I have to guess it fattened on sand eels, arguably the fattiest feast item a fish can find. And thanks to him for offering me one. I turned it down – with high hopes of getting my own for Christmas – not this Monday but next.

I made a Holgate run ahead of the snow and collected some nice wampum material in the form of busted hard-shell (chowder) clams, dropped by herring gulls, which loose the clams from a goodly height, causing enough breakage to free the meat -- but not causing enough of a smash-down to wreck the purple section of the inner shell. The purple is the heart of wampum, the part I use for making what I’m calling “shell totem” pendants and “luck stones” (shells). For designs, I draw on what Native American blood I still have within me from way-back Algonquian kin.

By the by, totems aren’t big poles marking “trading posts” along the interstate out West. Those are, in fact, “totem poles,” with a slew of totems stacked one atop another, comprising a pole. Totems are actually symbols -- carved or inscribed.

While modern totems are commonly creature heads, especially wolves, those types of discernable images were developed later – and eventually morphed into trade/sale items, nixing the original spiritual aspects. Primitive totems were very spontaneous, sometimes roughly common shapes but just as often highly abstruse – downright weirdish designs and shapes -- a bit like modern art … from way back, if that makes any sense.

I’ll soon have some photos of the latest shell carvings I’ve done, which truly go the abstract route.

Anyway, there were three or four snowy owls in Holgate, as shown below – photos and video. I also heard of a couple/few elsewhere on LBI. One family had a “huge” one land on their backyard fence. “It was kinda spooky at first,” I was told. And I fully agree. The first one I ever saw was in Holgate, years back. I initially mistook it for some sort of manmade decoy, seemingly washed up on a sandy beach embankment. As I rushed toward it to toss in the back of my truck, it slowly turned its head straight at me, daggering me with those penetrating gold eyes. I ground to a halt and backed the hell off -- with a hearty “WTF!”

Anyway, it was nice seeing a slew of fellow owlers down there. (Hope you saw that big one, Susan.)

As if it need be said, it was frigid down there.

DIG-OUT: I helped some owlers free their Jeep SUV, near the overwash zone.  They fell into the frozen-sand trap, of which I often write. That’s when the upper layer of beach sand forms a frozen crust. Buggies break through the crust and instead of getting a good bite in the sand, the tires keep hitting breaking ice-sand, getting nowhere; it has bog-down written all over it.

These folks today were legal, permit-wise, though fully lacking any digging tools -- until I came along.

As you can see in the video, it was mainly manpower that won the bog-down battle. Also, note the way the SUV would get a bit of momentum and run into the edge of ice-sand. That engine was revving! Look closely at the broken sand to see the frozen ice layer. 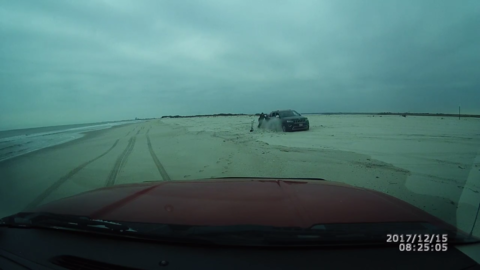 By the by, they were nice folks. Always makes it more enjoyable helping out.

Snow (coming down as of 3 p.m.) atop frozen surface sand is virtually impassable for even the best buggies, i.e. my truck.

It’ll be a short wait for much milder weather to move in from out west. While we only missed by a week, it will NOT be a white Christmas. In fact, look for a warming trend clear into the first days of 2018. 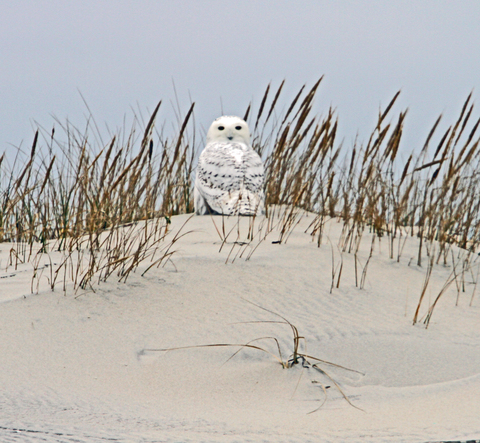 Here's a video look at the bigger of three or four owls in Holgate ...


Last day of the LBI Surf Fishing Classic..... it's a sickness

Mr. bucktail get you every time ! Spent last hour crushing fish on the beach!

Operation Broken Glass, an interagency sting of a national elver trafficking ring based in Maine, has yielded two more jail sentences and a guilty plea this week.

Yarann Im, a 35-year-old Portland seafood dealer, was sentenced to six months in jail for illegally trafficking 480 pounds of elvers, which are also known as glass eels or juvenile American eels, following a hearing Thursday in federal district court in Portland. Im pleaded guilty in 2016 to buying more than $500,000 worth of eels, or almost a million individual elvers that had been illegally harvested in Virginia, North Carolina and Massachusetts, and selling them abroad.

Thomas Choi, a 76-year-old seafood dealer from Maryland, was sentenced Thursday to six months in prison with a $25,000 fine for trafficking in $1.26 million of elvers.

On Tuesday, Maine fisherman Albert Cray pleaded guilty to trafficking elvers, admitting to harvesting them illegally in New Jersey and selling them to a Maryland dealer, who then exported them from the United States to buyers in Asia. In 2013, Cray admitted to trafficking more than $250,000 worth of illegally harvested elvers, according to a statement of facts filed with Cray’s plea agreement.

“The poaching and illegal selling of American eels negatively impacts not only the species, but also the economies of our East Coast states and the livelihood of local U.S. fishermen who legally harvest these eels,” said Edward Grace, acting chief of law enforcement for the U.S. Fish and Wildlife Service. “These recent court actions should serve as a warning to those who illegally profit from our country’s natural resources. You will be caught and held accountable.”

Eels are highly valued in East Asia for human consumption. Japanese and European eels were historically harvested to meet this demand, however overfishing has led to a decline in these populations and harvesters have turned to the American eel to fill the void. American eels spawn in the Sargasso Sea, an area of the North Atlantic Ocean bounded on all sides by ocean currents. They travel as larvae from the Sargasso to the East Coast of the U.S.

They enter a juvenile, or elver, stage when they reach the U.S. They swim up river and grow to adulthood in fresh water. Harvesters and exporters of American eels can sell elvers to East Asia for more than $2,000 a pound. Because of the threat of overfishing, Atlantic Coast states have cooperated to ban elver fishing in all but Maine and South Carolina, which heavily regulate their elver fisheries.

Led by the US. Fish and Wildlife Service, Operation Broken Glass set up a sting operation into the illegal trafficking of elvers. It has resulted in guilty pleas for 19 people that are estimated to have illegally trafficked more than $5.25 million worth of elvers. Maine Marine Patrol was one of 20 law enforcement agencies that has helped work on the investigation.

MAGNUSON-STEVENS ADVANCES, BUT NOT WITHOUT A FIGHT: The House Natural Resources Committee on Wednesday advanced out of committee revisions to the Magnuson-Stevens Act (H.R. 200 (115)) governing marine fishing and management in federal waters. The law is intended to prevent overfishing, but several conservation groups and Democrats are critical of the way it was written. Only three out of 12 amendments to the bill passed, and the bill moved out of committee on a party-line vote, your host reports.

What lawmakers said: Rep. Raúl Grijalva (D-Ariz.), who voted against it, called it a plan to “deregulate our oceans and fish everywhere until there’s nothing left.” He added: “Like most of the bills advanced by the leadership of this committee, this bill is extreme and has no future in the Senate.” Many environmental groups also issued strongly worded statements condemning the bill.

GOP leaders, for their part, took issue with the idea that it was being rushed. “The idea we are jamming this through without ample opportunity is false,” said Rep.Don Young (R-Alaska), who noted that he had been working on this legislation for the past five years. “I recognize this bill is not perfect yet.”

What about fishing criminals? After it was clear it wouldn’t pass, Grijalva pulled back his amendment to address repeat offenders in the fisheries industry — such as Carlos “the Codfather” Rafael who last month started serving a federal prison sentence for violating federal fishing regulations. Although Young did not support this specific amendment, he and other committee members said they would work with Grijalva to revisit the issue.

By ASSOCIATED PRESS December 13, 2017
(TALLAHASSEE, Fla.) — Florida wildlife officials and prosecutors have charged three men connected to a video of a shark being dragged behind a speeding boat.

The video of the shark being dragged went viral in late July after a Miami sport fisherman criticized it on social media.

FWC Chairman Bo Rivard said in a statement that he hopes the charges send a clear message that this kind of behavior won’t be tolerated.

Prosecutors in Hillsborough County are handling the case. Jail records didn’t list attorneys for the men.

I was out there surf fishing also from 3 pm till 5 pm until my right hand couldn't take it anymore,but where I was catching bass a couple days ago,nothing was hitting my lure or teaser. It was super cold though with that wind and blowing snow.Did see some kind of bait making some small splashes,probably herring and saw a couple common loons sitting and diving .