The always friendly summer Olympics aren't that far off ...

Friday, December 04, 2015: ‘Twas a beauty out there today. Sun pushing 10. Comfortably cool air temps. The breezes backed off enough to allow some boat bassers to launch.

The surf was gone real small. I plugged the south end and enjoyed the plug-carrying west wind (maybe 15 mph tops), along with some very clean water. Fish? Whadda ya mean, fish? You see, I angle purely for the aesthetics. Fish would be so counter to maintaining a soothingly simple day. In fact, tomorrow I’m likely going to take the hooks off my plugs, as to doubly assure I avoid anything as disruptive as, say, a hooked striped bass.

I did not hear of many surf stripers today, though I was off-Island for part of the day. I see that John Parzych caught a 9/10 bluefish in the surf,  using bunker. A blue that size is a tad unusual for Dec. 4, though water temps are still well within the comfort range for blues. Maybe I better put the hooks back on my plugs.

I heard there was a tightly packed fleet bassing not that far out, just off the LBI beach, north of SB. Sounds like they were onto something.

While the first week of December typically leads to visions of tropical getaways, deer stands or even holiday shopping blitzes, this week in particular should have striper hunters hitting the beaches and inshore lumps for bass blitzes. Those who’ve kept their boats in a tad longer this season have been rewarded by a great troll bite with Mojos leading the wave of recent weigh-ins, including a 50-pounder off Brigantine. More stripers have been found stacked from Ocean City south, while a turkey day blitz at Monmouth County bodes well for a sustained December surf bite up and down the Jersey Shore. In fact, picket fence conditions earlier this week at IBSP showed with surfcasters tangling with bass while standing shoulder-to-shoulder in the wash.

More giant bluefish at Del-Jersey-Land reef, while Delaware anglers are greeting the arrival of new waves of migratory striped bass. Good weather weekend ahead if you’re looking to climb aboard one of the local headboats in search of blackfish or black sea bass – definitely shaping up to be a December to remember. Check out our weekly rundown of reports for more. http://www.thefisherman.com/index.cfm...

Below: There were seven eagles using Holgate today. I spooked two off the beach (down toward the rip) and followed them with binoculars as the flew out to sea; many 100 yards out. They circled out there and soon they were joined by five other national birds. I waited to see of they'd move back in but my patience level is on par with a ferret. If anyone wants to get some eagle photos I think they'll stay thereabouts for at least the weekend. Not great pics since I only had small lens with me. 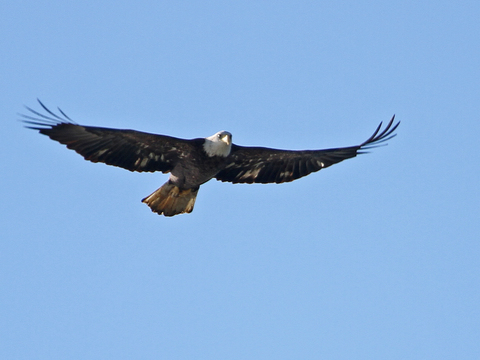 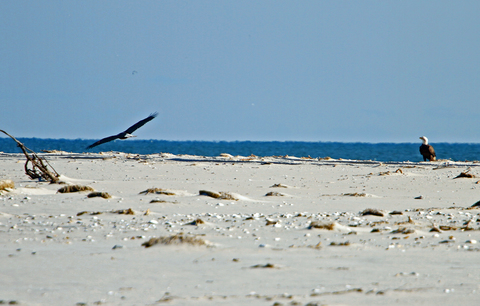 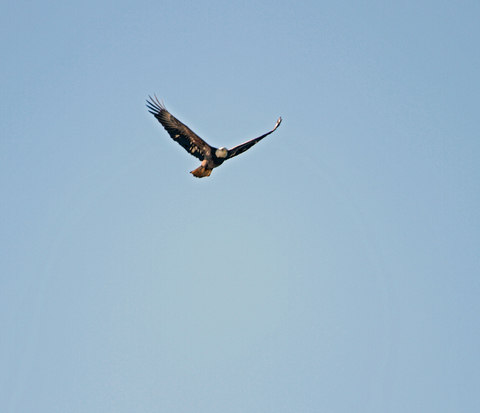 Below photos are so folks can get frustrated along with me about the way bait and bass can go crazy just to our north. This is Ortley Beach.Nick Pullano's photo. 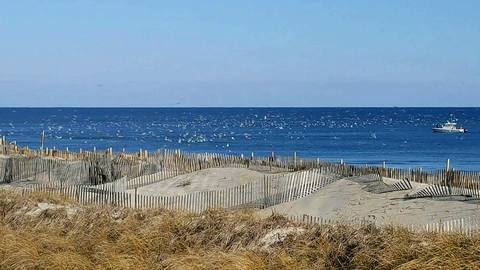 LONG BEACH TOWNSHIP — A federal beach fill project that was set to start this winter for southern Long Beach Island left vulnerable after Hurricane Sandy will be stalled until the spring, officials said.

Beach replenishment in Beach Haven and in the Holgate section of Long Beach Township was going to start in January but now may start as late as April, said Stephen Rochette, a spokesman for the Philadelphia district of the U.S. Army Corps of Engineers.

Rochette said the company doing the work, Illinois-based Great Lakes Dredge & Dock Co., informed the Army Corps this week that its two dredges currently working on Long Beach Island will be headed to another part of the country in January for other jobs.

He said a third dredge that is currently working on Fire Island in New York and was supposed to join the two dredges on Long Beach Island is also headed to another job.

Great Lakes informed the Army Corps that the dredges would not be back to New Jersey until April, Rochette said.

At that schedule, the company most certainly won't be able to meet the May 22, 2016, completion deadline set in the $128 million contract for all of Long Beach Island, Rochette said.

The Army Corps has been working on several beach replenishment projects after Hurricane Sandy decimated the Jersey Shore in October 2012.

This marks the second delay for the project on the southern end of the island, where Hurricane Sandy reduced narrow beaches to a thin strip of sand. Holgate residents, still recovering from Sandy, have been eagerly awaiting the project.

Work on the southern section was first set to start in the fall but was delayed until January to give Long Beach Township more time to obtain the oceanfront property easements needed for the work.

How white people have fun in Oakland, California ...

Hello Jay; also saw an adult Bald Eagle myself yesterday up here in Monmouth County fly over while I was bringing our trash and recycle cans from curbside back into our yard around 10:30am. Went Surf fishing about 3 pm for a couple of hours and caught and released another keeper Fluke right at dusk on a 6" SP Minnow Bullet Plug - blurple color (black -purple) which is the second Fluke in the last two outings,but no bass.Did see Peanut Bunker flipping out of the water a couple times,but just out of casting range and also had an adult Bunker about 12" which must have been beat up swimming very close to the wash on top.A lot of birds were working off of Sea Bright area and I spoke to two kayakers whom said they each had caught about 25 schoolie Bass and also saw big Blues too.