Friday, August 31, 2018: I knew the minute I ran with the forecast for light winds something ornery would blow in.

And when you recognize that nobody is paying attention to your serious soccer injury ...

I know, it was a rogue wave, right? Never mind there's a ten-foot swell running. I understand people sometimes not liking to have their pictures taken but this katydid got so mad his eyes crossed ....

Important: I’d really like to officially add more members (via requests) into the blog site but I have been overrun by worms – Trojany people wiggling their way in to then loose junk ad mayhem … or worse. Newcomers, please accept my apologies and simply check back regularly for new posts … which get more frequent as the approaching fishing fall time kicks in.

Friday, August 31, 2018: I knew the minute I ran with the forecast for light winds something ornery would blow in. Not only have the NE winds from a small low greatly exceeded the forecast (gusting to near 20 mph), but ocean swells and waves have very rapidly built, with waves already pushing five feet along the beachfront. The winds should settle down quickly by tomorrow, but the waves will take longer to lie down. In fact, I’ll likely be calling in rip current risk at the upper end of moderate for tomorrow’s people-packed 76-degree water temp beach day. Rip current risks are high, with most LBI guarded beaches having either crossed-flag condition or very restricted swimming areas.

There is an upside to the brisk onshore winds … it could stop the bunker die-off. 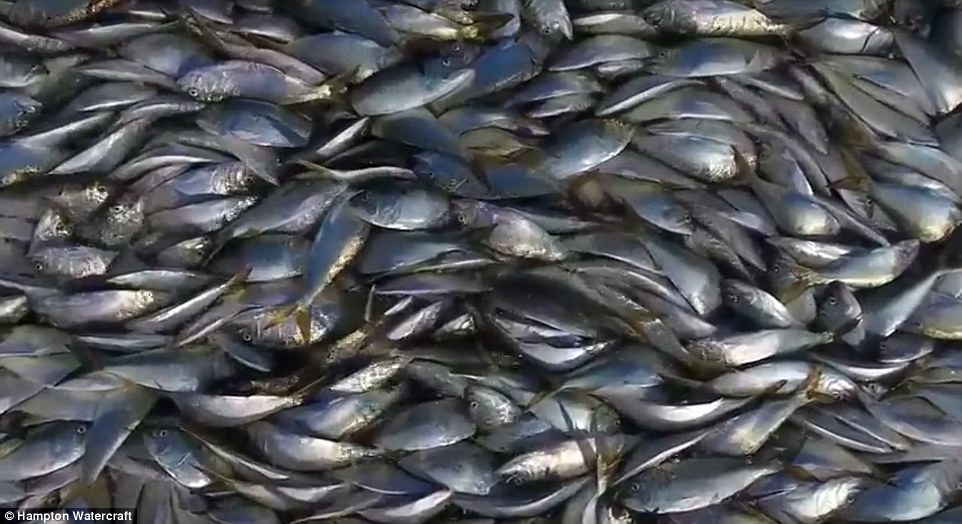 BAD DAYS FOR BUNKIES: Dead peanut bunker have begun floating to the surface of lagoons on LBI’s bayside (Dunes are particularly), likely blown in by recent west winds. There are also layers of them going belly up over Beach Haven West way.

Per U.S. Geological Survey literature, “Warm water holds less dissolved oxygen than cold water, so summer is the time when fish can have a hard time getting enough oxygen. Other organisms use oxygen, too, including the algae that grow in the summer and bacteria that degrade organic matter. During the day, the algae produce oxygen through photosynthesis, but at night, when photosynthesis stops, they and other organisms keep respiring, using up oxygen.”

At the same time, mankind can play a role in de-oxygenation of the bay.

“(Low oxygen levels) can occur as a result of purely natural conditions or because of human activity that results in adding nutrients, nitrogen and phosphorus, to water systems. Nutrients come from many sources: fertilizers, automobiles, sewage, manure, and others. An excess of nutrients tends to speed up the growth of algae and diminish the availability of dissolved oxygen. Low dissolved oxygen can result from other factors, too, such as poor flushing or circulation, dredging, or a sudden rain after a dry spell,” per water.usgs.gov.

You might recall a few years back when a monumental lagoon-based bunker die-off took place in the fall, down Little Egg way. This current peanut bunker kill is not only fairly minor but today’s massive influx of cooler, more oxygenated water into the bay, ushered in by hard NE winds, will likely put an abrupt end to the suffocating.

As for the dead bunker, as beloved as the species is by birds and gamefish as food, there’s something somewhat mysterious about dead bunker. In a decay moment, they become inedible to even ravenous predators. You know when the likes of otter, possum and racoons turn their noses up at a potential foodstuff, it must be awful.

As for the DOAs now afloat, they should either be manually scooped out of the lagoons – which begs the question of what to then do with them -- or be allowed to naturally decay (to high heaven), during which bacteria infiltrate the floating corpses, freeing the bloating gases trapped within, allowing them to sink to the bottom -- where the decay process really takes off, helped along by crabs, worms, amphipods and such. Any remains that remain get covered by layers of detritus.

While a case might be made that the die-offs are the result of recent rains washing nasty fish-killing crap into the bay, the timing is off, seeing the impacts of flooding would have happened closer to the times of rain runoff. However, as noted above, any enhanced algae growth might easily have played a part.

SHARK HOOKING FALLOUT: As expected, I got some counterpoint responses to my let-‘em-fish sharking position. Nothing bad was aimed at me directly. It was pretty much those folks who resent, overall, sharks being ogled over, via photos/selfies, forced mouth-openings, and (one folks really hate!) sitting atop the fish. I at least get to agree with them on bull riding an exhausted shark, knowing what those same shark riders would be like if faced with the same shark in its watery domain, i.e. pissing themselves blind, in sheer terror.

The above scene also mocks the serious side of sharks interacting with humans ...

I didn’t back down in my belief that protected sharks can be duly protected by anglers practicing proper catch-and-release. To this point, we agreed to disagree, but I did sincerely suggest that they write letters to the editor, at letters@thesandpaper.net.  I even promised I would not go after said letters. I’m an almost crazed believer in the sanctity of personally voicing one’s opinion through media, including print and social forms. Admittedly, I do sometimes freely go after what I’ll call obvious group-based opining, based far more on a group mentality or strategy. For overwhelming example, PETA people. I just can’t abide by the notion that all their members are dedicated to the nonsense they forward to stay in the news, likes of a roadside monument to remember dead lobsters (see yesterday’s blog).

Maine Highway Officials to PETA: Sorry, You Can't Put Up a Memorial at Site of Lobster Crash

Their dreams of a proper tribute to the clawed creatures have been cracked wide-open — at least for now.

Officials from the Maine Department of Transportation on Thursday denied a request from the People for the Ethical Treatment of Animals — or PETA — to erect a tombstone memorial for 60 to 70 crates of live lobsters that spilled into the road in Brunswick Aug. 22, when a truck carrying the crustaceans crashed along Route 1.

According to the Bangor Daily News, around $65,000 worth of live lobsters were destroyed last week when the box truck hauling them flipped in the northbound lanes, just past Cook's Corner.

On Wednesday, PETA sent a letter to the state's transportation agency seeking “permission to place a 5-foot tombstone memorial near the crash site."

The planned memorial would have urged drivers passing by to “Try Vegan," and included a picture of a lobster etched on the front.

“Countless sensitive crustaceans experienced an agonizing death when this truck rolled over and their bodies came crashing down onto the highway," Tracy Reiman, PETA Executive Vice President, said in a statement. “PETA hopes to pay tribute to these individuals who didn't want to die with a memorial urging people to help prevent future suffering."

But a spokesman for MaineDOT told the Globe Thursday that the request was rebuffed, because signs of all kinds — including the one requested by PETA — are not allowed on that particular portion of the highway.

“They, or any other group, couldn't do it on that section," said spokesman Ted Talbot in a telephone interview. “That section is a Controlled-Access section, meaning that there's a lot of car and truck traffic and volume at high-rates of speed."

He said even if the group proposed downgrading the tombstone to something like a political sign, it would still be denied.

In a letter to PETA from MaineDOT “respectfully" denying the request, officials said there are various reasons the tombstone wouldn't be allowed, but the main reason is safety.

Talbot said the group's dreams aren't entirely dashed, however. Under Maine state law, temporary signs or roadside memorials can be placed in designated areas for up to 12 weeks in designated areas, according to the Portland Press Herald. They also must be no larger than 4 feet by 8 feet.

“They could go anywhere else that is not a controlled-access section," Talbot said of the request from PETA. “As long as they stay within the temporary sign law, sure." 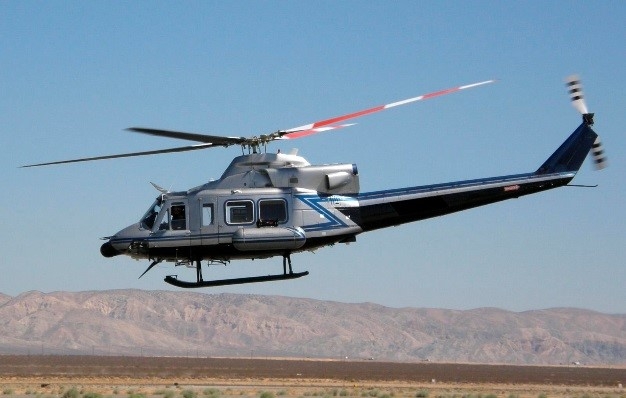 WASHINGTON – The U.S. Department of Energy’s National Nuclear Security Administration (DOE/NNSA) will conduct low-altitude helicopter flights over the route of the Boston Marathon, from Hopkinton to Boston, between April 12 and April 15 to measure naturally occurring background radiation.

The public may see a twin-engine Bell 412 helicopter, which is operated by the Remote Sensing Laboratory Aerial Measuring System from Joint Base Andrews and is equipped with radiation sensing technology.

The helicopter will fly in a grid pattern over the area at 150 feet (or higher) above the ground surface at a speed of approximately 80 miles per hour. Flyovers will occur only during daylight hours and are estimated to take about three days to complete.

The measurement of naturally occurring radiation to establish baseline levels is a normal part of security and emergency preparedness for major public events.

NNSA routinely notifies the public of upcoming flights so that citizens who see the low-flying aircraft are not alarmed.

DOE/NNSA has conducted these flights in support of the Boston Marathon since 2014.