FRANK'S DAY: We could see something comparable to a gold rush on the surf fishing front tomorrow.

FRANK'S DAY: We could see something comparable to a gold rush on the surf fishing front tomorrow. It’s the Long Beach Island Surf Fishing Classic’s single-day $1,000 special prize for the largest bass of the day.

While the prospect of having that much money riding on a single striper is sensational, it should be remembered there is also a solemn side to this cast for the cash. It memorializes Frank Panzone, the man who successfully guided the Classic through mighty tough waters, including a fearfully precipitous drop in signups. He was also a three-decades buddy of mine – and someone who stood beside me during a nasty stretch where I mixed it up with some surf casting detractors. In fact, he cooled me down from getting down and dirty with some folks, so to speak.

As to those rough tourney waters, Frank never wavered from making sure the Classic stayed alive and in the Chamber’s hands – where he also showed his leadership as the man behind the Chowderfest. He had gotten the tourney far enough back on stable ground that when he passed -- and the Chamber distanced itself from the event -- he left us a lot to work with.

Frank, tomorrow’s bass – all of them, largest to smallest – are for you.

As to what fish should be brought to the scales tomorrow, I’m not kicking anything out of bed, so to vulgarly speak, though I will keep an eye on what is coming to the scales. Still, anyone can win. How to play serious (though I’m just not that serious): Use huge baits and bunker heads on big rods with medium circle hooks. Then, spend the entire day waiting for gold to strike. Hey, you know as well as me that stripers actually are very golden in color.

That six-day nor’easter and Congress (no Holgate access) surely leveled the playing field as to the best locales to go bassing. I’m sold on the far north end but can surely see a big-ass bass coming from Nebraska Avenue southward and through Town (BH). I know some folks who live and breathe Jap Hole.  And who can forget North Beach and Loveladies. For walk-ons, Ship Bottom is right there for ya. Though I’ll get testy and question whether any of the replenished beaches are even in the running for day’’s-best-bass. I’d love to get proven wrong with a biggy from HC, SC or BB. Oh, lest we forget, you can also fish the likes of High Bar Harbor or Emma. 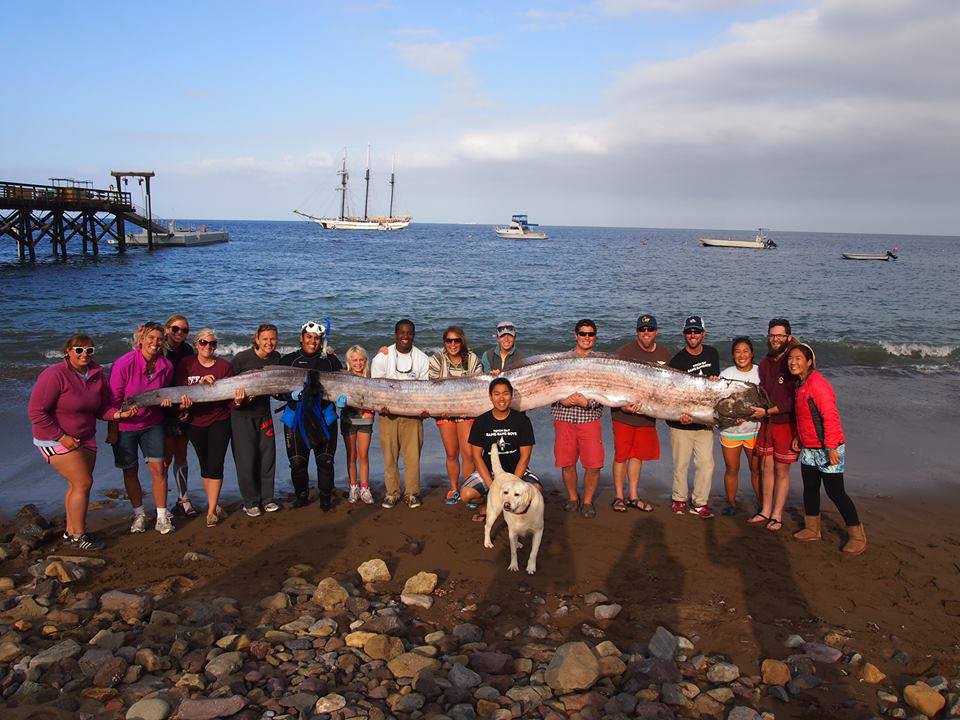 An 18-foot long oarfish washed ashore at Catalina Island over the weekend.

It took 15 adults to carry it up the beach to get a better look. Catalina Island Marine Institute instructors say it appears the fish died naturally.