Sunday, April 08, 2012: It’s back to the boats ruling the bass bite. Gannet chasers off IBSP northward are banging bass in nonstop numbers. I had a video sent to me of the crowded action. I have never seen gannet diving like that, even in fall – when they’re usually around. This spring showing could be due to the winter-long presence of forage fish, the increase in bunker due to ongoing conservation efforts, or the upcoming change in planetary polarity.

The beach bite is real iffy. I talked to few folks who easily attracted skates. A few small bass were taken on clams. I always fret that those massive amounts of bait so close to the beachline pull surf stripers out to sea. One thing is certain, there is no shortage of bass.

“I saw your post about Gannet. Just wanted to let you know we have a
cloud of them this morning, about a mile long going berserk from south
Harvey Cedars to North Beach

Quite a sight, and they are eating something!

Photos from that site: 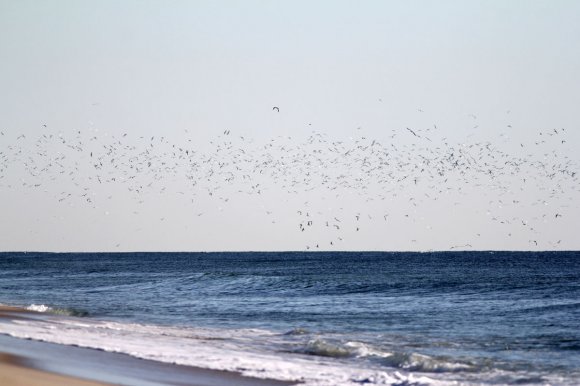 With the boat finally back in the water, we took the opportunity to sneak out for a couple of hours yesterday afternoon to see first hand what was going on. We've been getting reports for the past few weeks of striper fishing ranging from fair to epic along the beachfront, but between my off season tax work and other personal commitments I haven't been able to actually see things for myself. Well let me tell you, the reports are accurate. Flocks of gannets over massive schools of bait and bass, so many birds pounding the water that for 3-5 minutes it would look like a waterfall coming off a cliff. And not just once, that scene seemed to reoccur about every 15 minutes or so. Even in the fall I've never seen anything like it. Just being out there watching it was worth the trip, and the fat 25 pounder in the box when I came back in was a bonus. To my recollection we've never had a striped bass season get started this early around here. I can't believe these are migrating fish already, so I guess they're just fish that stayed around all winter due to the warmer than normal ocean temps. But it sure looks like there were a lot more of them than anyone suspected. I can't wait for next weekend to get out there again.

I'll be tied up with taxes until April 17th this year, but will be resuming full time charters on April 18th. Hopefully this fishing will last through June again this year, but I'd say it's time to get some earlier than usual trips booked.