December 18, 2014: A mere week from holiday touchdown. The odds of a white Christmas are incurable low. December 18, 2014: A mere week from holiday touchdown. The odds of a white Christmas are incurable low. I had called for mildness for mid- and late-December and that is lining up to play out. At the same time it shouldn’t be so mild s to eve the mountains of New England snowless – providing the machines are humming.  The Poconos and upstate New York might have some snow woes.

Our main snow attraction, the great Holgate snowy owl was right on-spot, on queue when I hit there to do some mudflats clamming. However, it has gotten noticeably edgy, even with me. Maybe there is something to the concept of too much admiration makes wildlife nervous. I actually don’t even stop any more. Folks way better at shooting pics are out and about. I like being the first to shoot and also the one to catch any odd wildlife activities, based on my simply being down there to catch said odd activities.

There was nothing odd with the clamming today. It was cold … and clammy. I hiked in – not very far – and needed very little time to nab 50 clams for personal use; mainly cherries, which I use for chowder and spaghetti sauce. I’ll be making the later tonight. . The blowout tide helped.

Tomorrow, I’ll grab some more quahogs but will also try for some growingly rare Holgate “softies,” technically Mya arenaria, better known "steamers", "softshells", "longnecks", "piss clams", and "Ipswich clams." As it is with the hard-shell clams, the Holgate variety is the best tasting anywhere.

They’re tough to dig because they’re at least a foot down and sometimes a solid two feet below the surface. But the real bugaboo is how fragile they are. You can’t properly dig them with tools. You tool down to about where you think the clams might be then you use finger digging and feeling around. On good beds, you can pull half a dozen out of single hole, as if fills up with water. This time of year, digging ends when fingers become so numb in the icy water you couldn’t feel it if a moray eel had grabbed your hand. Sure, there are huge moray eels in the sand – thus the few number of softshell clammers. 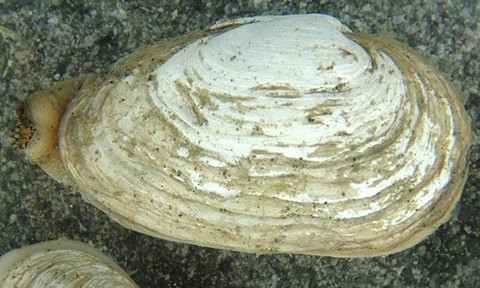 I’ll try to do a video to show how to pick these deep-down bivalves – if, in fact, any are still around.

The softies are disappearing because the fast-growing grasses are expanding over the west side mudflats, overrunning the softshell clam beds. However, today I saw a few indicators that some are still holding out amid the invading grasses. I might as well harvest them because their days are strictly numbered. 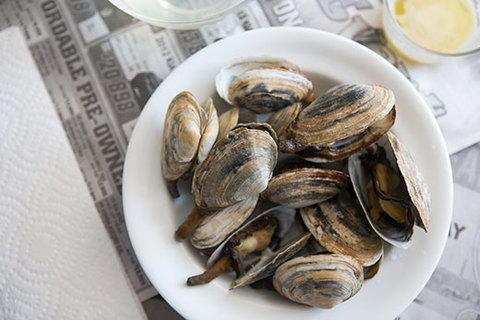 Like the hard-shells, it’s best to purge softies them in a bucket of clean ocean water, preferably overnight. They also need to be hand de-sanded a bit before cooking.

My weirdest use of softies is as bass bait. I don’t even shuck them but hook on the entire clam – shell and all -- sometimes using two. I gently flip them out while standing on a jetty. From the beach, they can’t be cast out too far (or hard) but there’s not a bass worth its stripes that’ll pass up unshucked softshells. 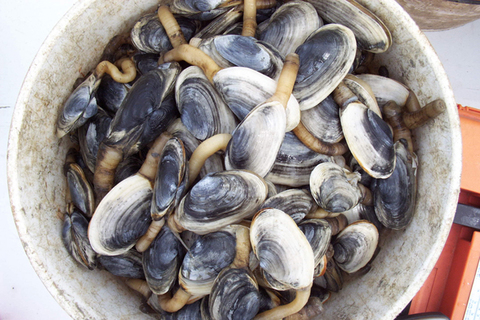 How do you know when a softshell clam is dead? They should move a tad when touched. However, if you picked the clams yourself, odds are even a totally still softie is fine once cooked.

SUNSET: No schoolie stripers where I tried at sunset. I couldn’t get down to my favorite jetty, though. Also, I had been out in the woods and didn’t leave myself much time to throw jigs. I still have a feeling I’ll be able to nab a Christmas striper. In fact, I think I’ll use the above mentioned method of softshell clam baits. Yep, I’m going balls out by using bait. Hey, desperate times call for desperate clam-chucking. Helping out will be circle hooks -- so I can toss out clams then walk off, jigging merrily away. A circle-hooked bass can’t throw that hook if you gave him a week of Fridays.