A towel too far. Artistically inclined, it made some wonderful snow patterns. eh? Next is just a portion of my custom-crafted the bakelite jewelry, egged on by short days and a coastal custom of doing artsy things while waiting to get back outdoors. 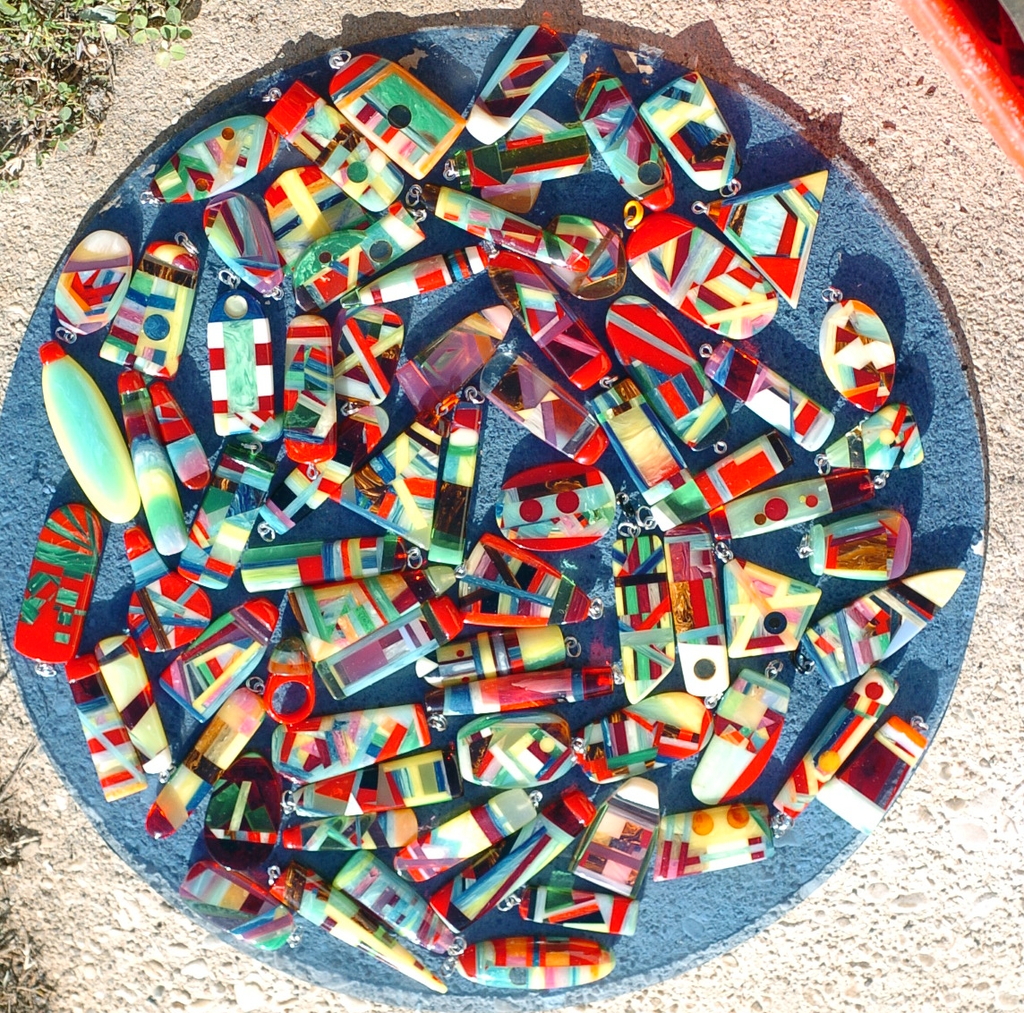 Tuesday, December 28, 2010: Nice day for diggin’. I’m out and vaguely about, though my freed truck is resting on the slippery street where, technically, it shouldn’t be. I just don’t have the wherewithal to carry on with digging -- and remove the snow equivalent of Mount McKinley from my parking lot front yard. Maybe later today – or not.

A quick note that it is important (and required) that you clear a pathway for the mailperson. This is only fair. Those folks are going to have things bad enough for many delivery moons to come. Removing that series of icy hurdles between the street and the mailbox makes a huge difference. Yes, the other delivery services will also cash in on the pathway but, hey, if you’re anxiously awaiting that 4-foot by 6-foot black velvet painting of a Bengal tiger to grace the living room wall, the FedEx and UPS guys will have surer footing delivering it safely.

Some towns are ready to have the public works guys help you dig out. Don’t expect instantaneous service, though.

I officially report snow amount at 26 to 28 inches to the Weather Service -- and that was way conservative. I honestly feel some areas reached that 30-inch mark with way more surrounding my house.

How about Sweet Jenny’s Peppermint Park over in Barnegat burning to the ground? A loss for me since I fondly knew that building from years back. I’ll skip the stories; including being fiercely put upon by a reindeer – yep, a real live reindeer (unrideable). Hey, bad decisions make the best stories. (I’ll be using a lot of those, Walt.)

Odd tale: A bevy of feral cats was hunkered down in a snow buried unused dog house in a LEHT backyard. The owner was digging snow away from the entrance when three or four cats exploded out, flying high into the air before landing and sinking into deep snow. The cats apparently made some sub-snow progress before jettisoning back out of the snow, going high into the air for a few feet of top-side progress before hitting down and going back under, to emerge skyward a few feet further away – into the distance. Now, I’m not a cat hater, per se, but it would have been a blast chasing them all the way to the cyclone fence. “Bonk! Bonk! Bonk!”

December 28, 2010 - TOKYO, Japan's sushi industry, concerned about the reputation of its national cuisine, will next month launch a certification campaign for foreign sushi chefs, an industry group said Monday.

Similar campaigns to certify authentic sushi overseas have been criticised as an attempt to impose a 'sushi police', but the All-Japan Sushi Federation says the latest effort is aimed at promoting hygiene.
'Most restaurants overseas make sushi dishes in the same kitchen as those preparing meat,' said Masayoshi Kazato, a leading sushi chef who has devised the certification system.
'It gets unhygienic if you deal with raw salt-water fish in a kitchen without water running constantly for cleaning,' he said.

The group, which represents sushi restaurants in Japan, plans to hold its first seminar in Singapore January 26-27 with similar seminars to be held in London, Los Angles and San Francisco next year.

There is a mounting concern among sushi chefs in Japan that, if food poisoning repeatedly occurs in the world because of a lack of proper knowledge and techniques, sushi may get branded as dangerous food, Kazato said.

SEAFOOD.COM NEWS [Associated Press] - December 28, 2010 - TACOMA, The quest for green energy is increasingly focused on ocean power such as tidal and wave generators.

But some scientists are raising concerns about whether those projects could interfere with salmon and other species with sensitive internal compasses.

Pacific Northwest National Laboratory oceanographer Andrea Copping tells The News Tribune of Tacoma that scientists believe salmon, like sharks and sea turtles, might sense the Earth's magnetic fields as they navigate back to their natal streams.

Some scientists worry that the power-generating devices and the cables that bring their electricity to shore can create electromagnetic fields that could interfere with the salmon. Copping's lab in Sequim on the Olympic Peninsula is studying the reactions of salmon, Dungeness crab, halibut and American lobsters when copper wiring near their tanks is energized.

'Before we put these power-generating devices in the water, we need to know how they will affect the marine environment,' Copping said.

Even so, several projects are under way in the Northwest. The Snohomish Public Utility District has received a $10 million grant from the federal Department of Energy to install two tidal turbines in Admiralty Inlet west of Whidbey Island in Puget Sound. The Navy has also explored the possibility of placing generators in the Sound, though Copping said that project is on hold.

A company has a license to move forward with a commercial-scale wave project off the Oregon coast, Copping added.

Wave generators off the coasts of Washington, Oregon and Northern California could eventually produce 50,000 megawatts of electricity, or roughly the output of 50 nuclear-power plants, the Northwest Power Planning Council has estimated.

In the Sequim lab, aquarium tanks filled with marine species are placed near two large coils, each containing about 200 pounds of copper wiring. Electricity is fed into the coils and an electromagnetic field is created with a magnetic flux equal to the power of a small bar magnet. Scientists study the reaction of the marine animals when the coil is energized.

Copping said preliminary results from her lab's experiments should be available in the coming weeks.

Stephen Kajiura, an associate professor at Florida Atlantic University, has studied how underwater electric cables can affect a shark's behavior. The cables can create electromagnetic fields.

He said sharks will bite the cables, thinking they are prey. 'The cables may very well produce magnetic fields that could disrupt behavior,' Kajiura said.

Both he and Copping said it's important to have scientific guidance on the subject.

'It's coming so fast, regulators are asking questions we don't have answers to,' Kajiura said. 'It would be nice to have some baseline research before we move ahead.'