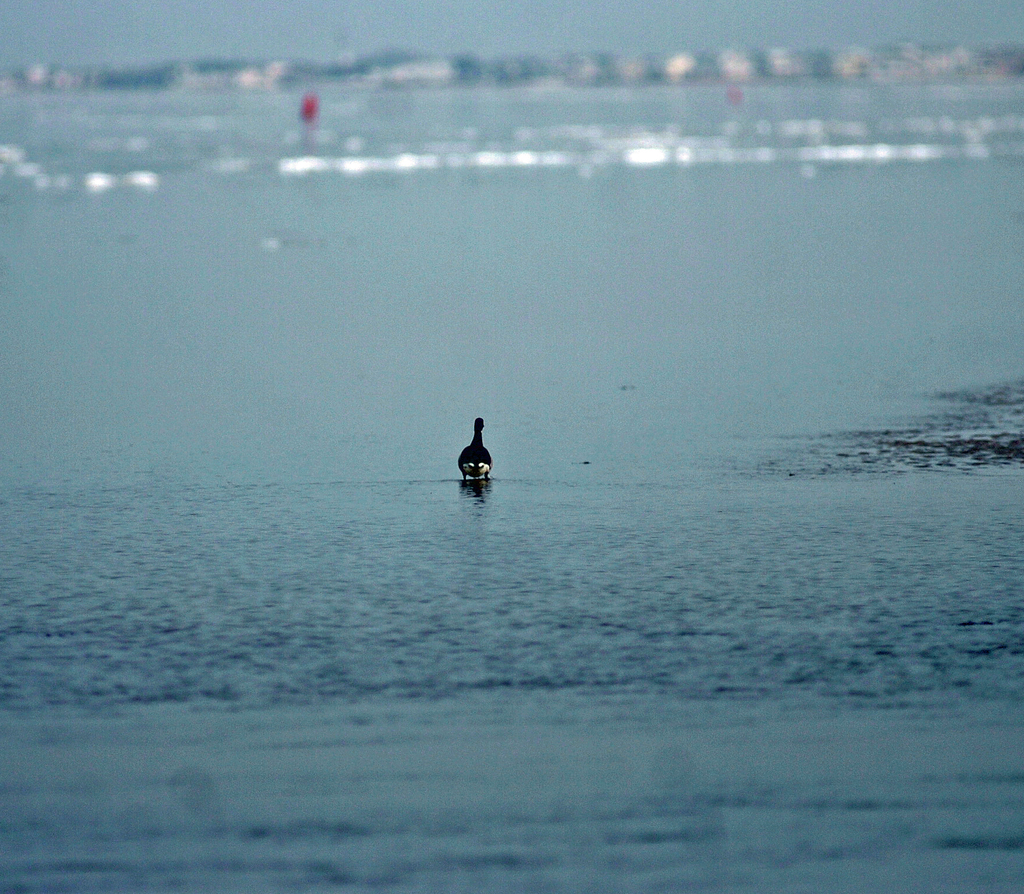 In America, we love our hard-earned excesses. Yes, we’ve earned them. Look how many wars we’ve fought to protect our oft overindulgent lifestyles. OK, so maybe our win-loss record at war has sunk a bit in the last 60 or so years – leaving us tied for victories with Serbia, Tobago and Tierra Del Fuego. Still, we’re a shoo-in to make the championship round … where we’ll kick ass! U-S-A! U-S-A!

But back to our beloved daily excesses. It’s when we start to lose them that we need to worry about where the nation may be heading – in a hand basket. Excesses are suddenly being challenged in the realm of showers and toilets, the backbone of every seriously excessive society. 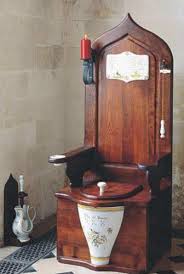 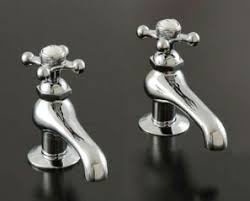 I fear we are losing the battle of bath – and beyond. Thanks to the greenies of the world, I see a dangerously deleterious downsizing of my personal water-use decadences. It recently came to a head at my new john – a post-Sandy “upgrade.” I’ll explain.

Where flushing was once a thing of gushing water flow, no more. The government has stepped in and essentially stolen my toilet’s former tornadic, all-consuming glory. All I get now, upon flushing, is a hissy little water stream, both weak and non-committal.

Worse yet, gone is the no-nonsense, heavy-metal flushing handle. In its place is this flimsy, tank-top, two-part pushbutton device. It looks more like something you press to get a Baby Ruth candy bar from a machine.

But, why two parts to the pushbutton flusher? That is to specify – and this is kinda sickening – whether I want to flush “fluids” or “solids.”

Are you frickin’ kidding me?! Why the hell should I have to explain myself to a frickin’ toilet!?

I haven’t looked closely at my john’s pushbutton thingy, but whadda ya wanna bet they’re number “1” and “2”? Dick and Jane are laughing in their graves right now. 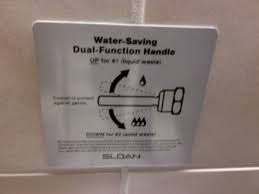 I probably shouldn’t publicize this, but there are now mornings I’m sorely tempted to press the “solids” button when I know damn well I’ve performed only “fluids.” I always end up backing down. I have this sixth sense that it’s not good to lie to your toilet. The nearby plunger is testimony to that end. What’s more, with clandestine video cameras all over the place nowadays, there’s always the risk of getting popped. That’s all I need is the flush police kicking down my bathroom door while I’m half asleep and getting ready for the shower.

“Let me see your hands, mister!”

“Well, you’re gonna have to see them wrapped around my ding-aling because I know where you’ll be aiming that Taser if I raise my hands. I’ve seen too many cop shows.”

But our nation’s anti-water-decadence efforts don’t end with just the toilet.

Prior to my Sandy rebuild, I had a beloved high-volume shower where I actually had to lean into the flow just to keep from being bowled over. If I set the showerhead all the way up, it could blast burrowed ticks clean out of my skin while performing medical-grade dermabrasion on my pores. Now, that was a frickin’ shower! Who gives a rat’s ass if it was conservationally corrupt?

Now, I’ve been reduced to standing beneath a drooling, water-saving showerhead waiting for each drop of water to hold its nose and hesitatingly leap from the shower head. If a drip or two doesn’t evaporate before reaching my skin, I lather up faster than an inmate in a Turkish prison. Hell, the drops aren’t strong enough to break soap bubbles. When I’m done, all I need is a couple pieces of toilet paper to dry off.

We just can’t have any more of our good old American excesses dry up. I’m fed up and I’m not going to take it. Just wait until I get to that flusher button tomorrow. The revolution begins then. Damn the torpedoes. I’m pushin’ “1.”

A HIPPY APPEARS IN HOLGATE: So I’m freezing my ass off after hiking – yes, hiking – maybe a half mile onto Holgate. I’m focusing on Snowy Owl One, for a quick photo before I bolt the hell back to my truck and never hoof it out there again.

A bit ghostlike, up steps a somewhat oldish gal, dressed in a lightish jacket that looked like it was artistically made from a bedspread or a curtain. Here I was shaking under three hoodies and a military “arctic” jacket. I hadn’t seen her peripheral arrival with all my hoods being pulled over my head.

I half-assedly responded, “Not only haven’t I seen any owls, I see absolutely no good reason that I’m here right now.”

She smiled a laidback smile straight from the ’60s. “Cool,” she offered, with absolutely no pun intended. She then just stood there, cool as a cucumber, smiling toward the nearby owl territory. In the meantime, I’m shaking in my L.L. Bean boots, gloving my cheeks while trying my hardest to recall the early stages of frostbite I learned while achieving my Frostbite Merit Badge in Boy Scouts.

Then, out of the blue – and without turning to me – she said, “Just think how wonderful spring will feel after all this cold.”

She then slowly turned south and began walking farther down the beachfront.

Her hippy philosophizing was momentarily lost on me, but she had planted the seed. Driving home, I wondered: Might this near moronically cold winter make the upcoming spring a thing of sheer warmth and delight?  It worked for a second. Then I recalled that during the hippiest of times, I lived on Maui. All I could think of is how much more philosophical I would be if I were there this winter.

I quickly resorted to repeatedly flogging myself for having ever left Maui.

POTHOLES AND PITHOLES: I’ve been getting the fully expected rants against potholes. This winter has been eating up roads to beat the band – the first parades coming in spring.

I’ve established that there are potholes and then there are pitholes. You can grow an entire crop of potholes in a pithole.

Fortunately, for the average Joe Driver, the pitholes are mainly out in the outback, though I’m not understating some of the pitfalls of roadway potholes. Sunday, I saw a near head-on on Route 9 when a gal swung her sedan to miss a pothole, lost it a bit and slipped into the oncoming traffic. A guy in a very new red pickup truck displayed thumbs-up reaction time in swerving out of her way. Mighta saved a life, buddy. Nice driving.

But back to the pitholes. If this weather can gnaw gaping holes in solid asphalt, think what it’s doing to defenseless sand and dirt roads. It ain’t pretty, from what I’ve seen. Some roads, like Munion Field, are seriously scarred.

Making off-roading matters worse, as drivers all we see is another puddle up ahead. The problem is winter often eats downward, not outward. There’s no seeing a puddle bottom until you’re in way too deep.

Back on the roadways, be advised that there are now some gaping schisms along Route 9. While they’re not quite pitholes, they’re the pits to hit. In fact, Route 9, from 72 southward, now needs a facelift in the worst way. 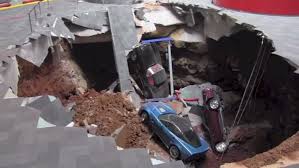 I’m not sure what it’s worth, but you can report a pothole to the state athttp://www.state.nj.us/transportation/commuter/potholeform.shtm. Or Google “report a pothole New Jersey.”

YOU OTTER SEE THIS: I have a couple interesting reports from bayside homeowners regarding back yards, porches and stoops being visited by abnormally outgoing otters. I got photos as proof.

As I oft note, there is absolutely no shortage of these frisky little mammals. In fact, some frustrated LBI folks might say we have too many otters after finding crab traps and fish ponds emptied by the ravenous buggers. Otters are as clever as any creature when it comes to making clandestine raids on human waterfront habitations.

When it comes to humanely trapping them, forget about it. They can actually smile – and readily do so in the face of even fiendishly clever traps.

However, sea otters are far from outgoing when it comes to mixing it up with humanity. In fact, part of the reason folks don’t realize how many are living nearby is the species’ furtive nocturnal lifestyle.

When I used to kayak fish near the Hochstrasser bridge at night, I got a feel for just how many otters were hurrying about. I also got a feel for the way they let me know I was unwanted there. The little numbnuts would purposely surface near my kayak and splash cold water on me. Repeatedly. I’d be out there like an idiot swinging at them with my rod as they loosed these odd squealing sounds. For people walking over the nearby bridge after the bars let out, that must have been an odd sight.

But what’s currently bringing them ashore – and into back yards? Obviously, that solid ice-over of the bay knocked their normal winter foraging for a loop.

Unlike their close relatives (weasels, badgers, ferrets and minks), otters do not hibernate. But they can regret a regrettable winter. Considering there hasn’t been a winter like this in the lifetimes of most of our sea otters, they might very well have their backs to the survival wall. Having seen raccoons successfully raid trashcans and outdoor pet food bowls, these fast learners might be turning to humans in their time of dire need. A smart choice. We’re all kinda animal friendly that way.

I’m always obligated to warn that as cute and cuddly as otters/wildlife can seem, they ain’t. Otters can instantly bite to the bare human bone. This is proven out by the way they can sever the head clean off a larger fish in just a couple side-mouth bites.

I can also attest they’re fully capable of splashing the s*** outta ya.