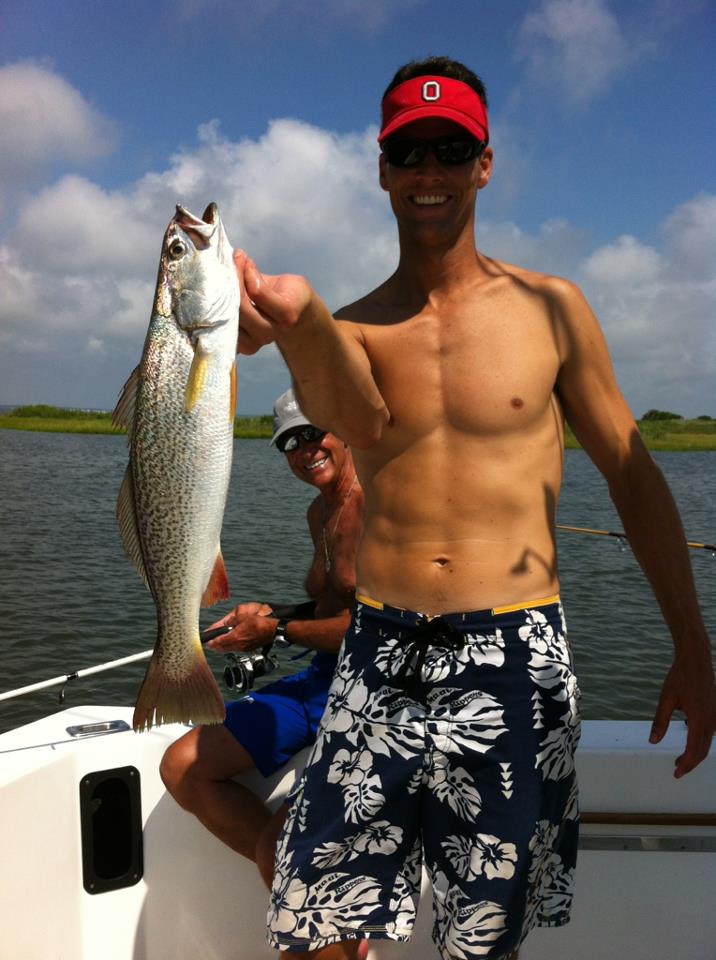 Saturday, August 04, 2012: I’m really burnt up. For real. It seemed like a day where the sun wasn’t all that committed to the beach. I backed off the sun block for just a few stinkin’ games of volleyball. Now, I look and feel like one of the thousands of turn-over tourists, arriving for the first beach day of their upcoming vacation week. Maybe I can score some tourist discounts somewhere.

The ocean has taken on some turbidity, especially when compared to the clean look it has had of late. However, I was surprised to feel it hadn’t lost any warmth. I was in the swash, launching my nieces and nephews into the air. When I can hang in the surf for half an hour without developing so much as a shiver, you know it’s warm. Still, the honking south winds scheduled for tomorrow will likely upwell some wicked cold water.

The reports of brisk to nonstop fluke hooking continue from south Barnegat Bay. I don’t get as many voices from Little Egg down to Grassy, but I do see some sweet flatties being weighed in from that zone. I have to admit, it seems the fluke bite is a lot more torrid around Barnegat Inlet but there is also 10 boats there to every one working BH/LE inlets. That means more reports. 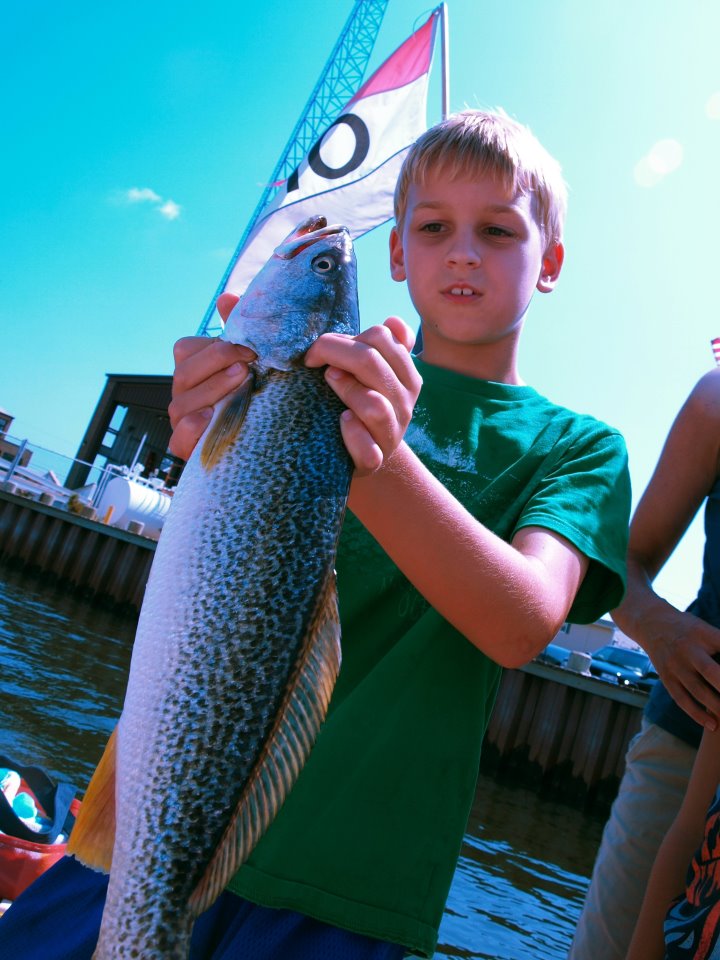 Photos of truly gorgeous sparklers keep hitting shop walls. These are solid 3- to 5-pounders. Weakfishing places, like Myers Hole, are so fast-paced they can border on shooting ducks in a barrel. Regardless of the hooking speed, the bag limit remains one-and-stop.

A number of charter boat captains have other holes in Barnegat Bay (including the west side) also offering old-fashioned summer weakfishing.

It should be remembered that even back in the fully-loaded summer weakfishing days (pre-1980s), it was mainly spikes, with some nicer weaks mixed in, i.e. just as we have it now.

I had an email, asking why there are no tiderunners. They never were a major midsummer presence. However, I’m now questioning my own prediction that we won’t see any, say, 8-pound and up weakfish this fall. This current weakfish showing sure makes it fell like past times, when a vigorous midsummer run was followed by the arrival of top-shelf weakies in the fall, cruising in for the migrating mullet and bunker.

Shark fishing is a sure-hook fishery. It’s browns, browns and more browns being landed. If the shark was too big to turn, we might be talking larger models, like duskies or who-knows-what.

I’m kinda impressed with the way shark fishermen, including the newbies, are being mighty damned competent in hooking and releasing their photo-and-release catches. That conservational thinking plays out in a big-picture ecological way. Now, if folks would only be gentler releasing undersized fluke. That’s gonna take a lot longer to teach. 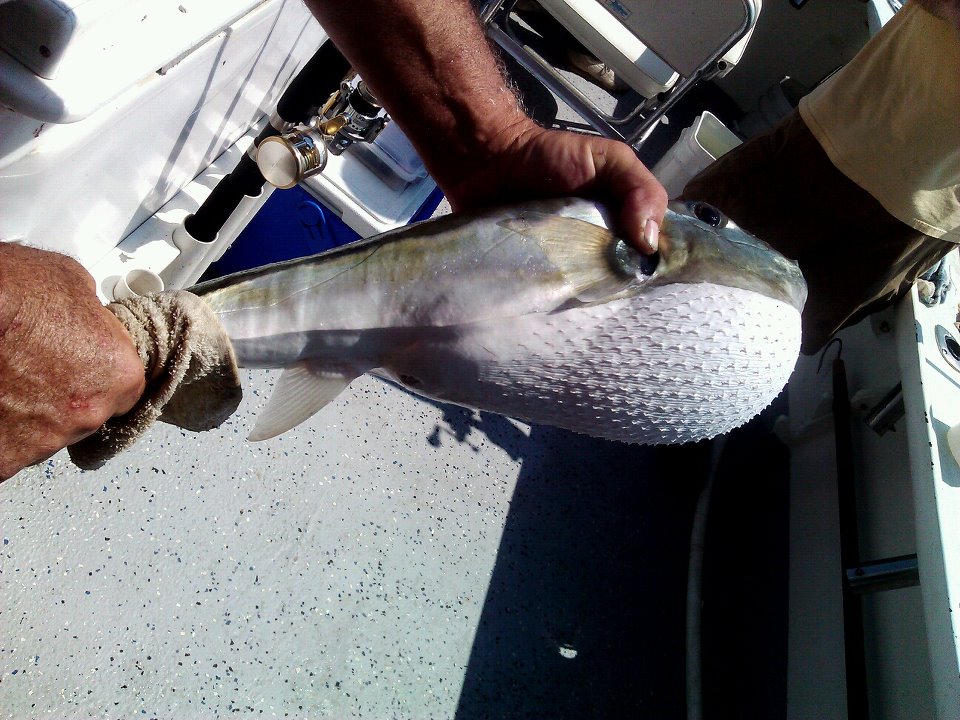 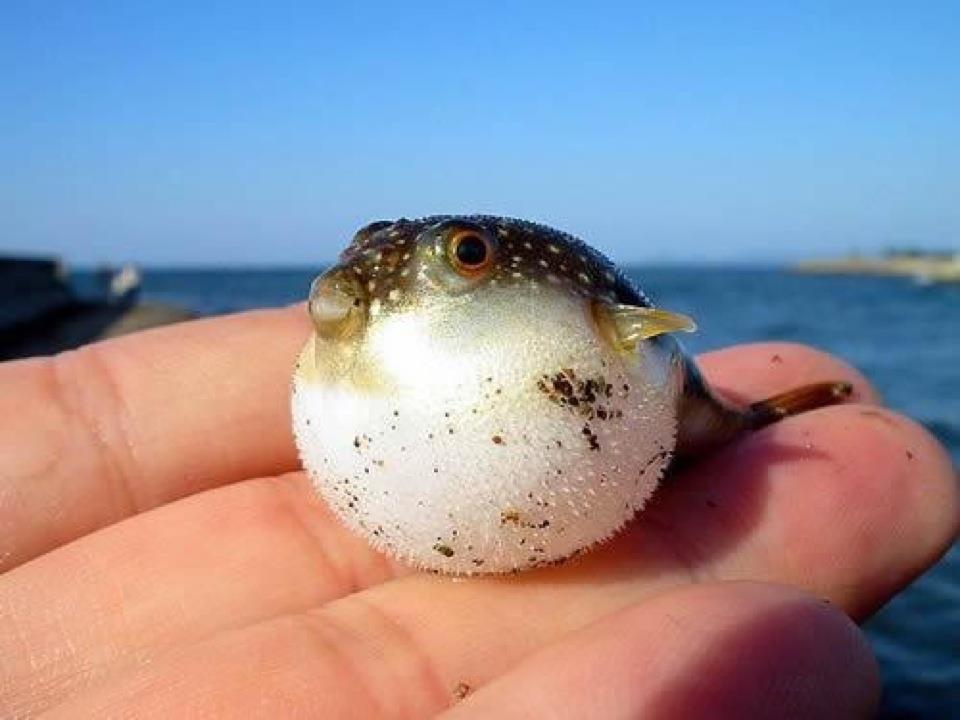 More and more photos of smooth pufferfish hitting the Internet, being caught from Sandy Hook down to Cape May.

I’m not going overboard on advising folks the fairly large smooth puffers are edible. There is already such stigma attached to many puffers in tropical climes, where they take on toxins, exclusively in their internal organs. Its reputation isn’t helped along by Wikipedia, which reads: “Pufferfish are generally believed to be the second–most poisonous vertebrates in the world, after the golden poison frog.”

For most folks that puffer fish news would be distressing, for me I have to rethink my beloved golden poison frog legs. Just kidding, I’m a pesco-vegetarian, though I guess frog legs are right on the cuff.

Anyway, when puffers get up here, they are void of poisons. However, this summer is so damn weird, I sure as hell won’t run out and suggest eating smooth pufferfish, though I’ll gladly try one myself – after using fugu cleaning methods.

This is the look of a true thresher: ALLEGED LBI STINGRAY STING: I’m not sure what to make of the alleged stingray “sting” reported yesterday on LBI. I wish I had been there. I could tell in an instant or two if it was a bona fide ray sting (very unlikely) or just one of the hundreds of random pokes you can get when splashing around in the swash, especially with pieces of horseshow crabs bouncing about in the mix.

With a ray sting, there is, firstly, a distinct red impact/insertion point, quickly followed by an expanding pink/red inflammation zone, half-dollar size and sometimes larger. Then comes the onset of pain, which can sometimes be a bit delayed, though it usually comes on pretty quickly, beginning in a few minutes, and intensifying rapidly. The escalating pain is capable of sending even a tough guy running to his mommy.

Personally, I have seen -- and felt -- cases where the worst pain from a sting can be sorta time-released. I found that out after once taking a poke (somewhat intentionally) and soon after offering the most unadvised words anyone should speak after getting poked, bitten, stabbed or stung: “Hmmm, this is not that bad.”

As for the validity of the stingray sting, it is truly rare to accidentally bump into, much less step on, a ray. As I’ve oft written here in, I have actually gone out amid thousands of cownose rays and tried my hardest to simply touch one. They are so frickin’ fast and elusive.

That said, this warm water could have any number of ray species swimming in the waves, including those not as inclined to school. Loner species are more likely to hold their ground and possibly be bumped or stepped on, so you can’t rule out a true sting – unless it lacks the inevitable aftereffects, which can last for days and even lead to blood poisoning. I have never seen a stingray sting just “clear up” after a poke incident.