Above: Mako and quick snack ...

a.m. Thursday, October 04, 2012: Small bass are on-scene but they sure aren’t kicking it. Three anglers I know have bested a couple/few schoolie-grade bass early a.m. All of them bemoaned the plague of tailor blues. While I’m a fan of those blues, I fully know how frustrating they can be after having plugged a bass and, wanting more, take blue after blue.

Hearing about sand eels showing -- as if enough bait isn't out there already. 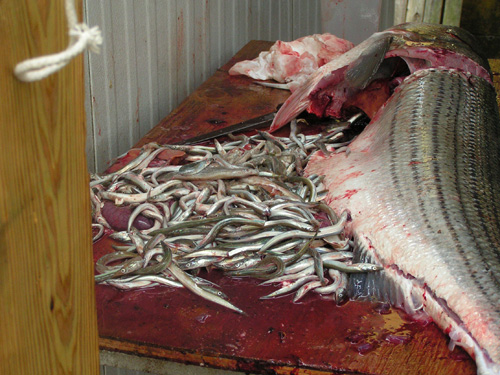 It’s gotten to the bluefish point that I’m laying off throwing beat-up vintage plugs – even though I put them aside for actual fishing usages, as opposed to retiring quality specimens for antiquity. A couple 1960s era blue-mirrored plugs I used have been be-chromed by tailor teeth. Those older reflective plugs have this ugly yellowish plasticy base color underneath. The minute that splotches of bareness show, even the blues lose interest in the plug. That tells ya something.

Registrations are going fast for the 2102 LBI Surf Fishing Classic. Get crackin,’ as in, get joinin’.

Holgate Advisory: The Commemorative 18-Mile Run is this Sunday and can be very disruptive when trying to get onto and off Holgate as the race develops in the parking lot at maybe 9:45 a.m. -- and begin at 10:30 a.m. 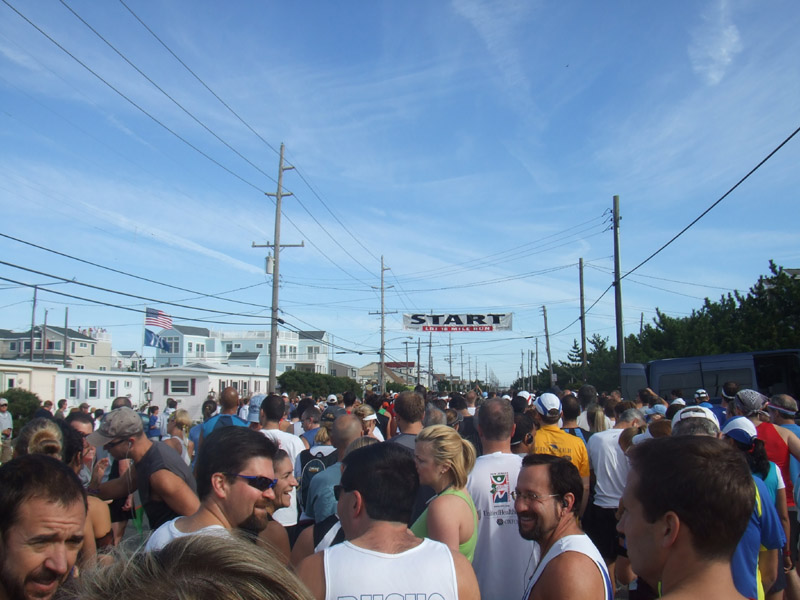 FB: via Randy Matlack: ‎!50lb mako took a tuna bait and did a back flip off the stern and bounced off the transom on last nights trip!!!! 50 lb. floro leader. The little shit proceeded to do 8 somersaults and drag my ragged, sleep depraved ass all around the boat twice! I aint slept in 2 days. He eventually bit though the leader, which was just as well, cause I didnt have a harpoon on board or my trusty 44. Ruger to blow his head off once we had him at the boat. Total score, 5 for 12-13 on 70 to 100 lb. yellowfin tunas, a nice swordfish and a 30 plus pound mahi.......and one beat to f@#k up captain.

For more than a decade, it’s been thought that shellfish and other sea creatures off New Jersey’s coast don’t have enough oxygen, which threatened their well-being and maybe even their continued existence.

State and federal authorities even classified the waters as impaired in 2002 and since then, state Department of Environmental Protection researchers and others have looked for a cause.

But scientists’ take on what their sea water readings meant were likely wrong. The ocean might be healthy after all.

As part of two-year effort, state and federal scientists have been taking account of the coastline and the waters beyond to conclusively prove low oxygen levels at the sea bottom — otherwise known as the benthic zone — are not a permanent feature of life there.

And they say they have found evidence the ocean is, in fact, home to a thriving and diverse community of organisms, none more important to the state’s economy than the $150 million in scallops, oysters, clams and other seafood harvested off New Jersey’s coast each year.

"From what we’re seeing, living in the benthic environment is healthy and good," said Robert Schuster, acting section chief of the DEP’s Bureau of Marine Water Monitoring, alluding to life at the bottom of the seas.

Earlier this month, in calm seas about 3 miles off Sandy Hook, the effort’s key player, a 6-foot yellow submersible that resembles a torpedo with wings, was plunged off the stern of the "Clean Waters," the federal Environmental Protection Agency’s 65-foot, twin-engine boat.

The tide-powered contraption, officially known as a Slocum Coastal Electric Glider, weighs about 100 pounds. It swims slowly — about a half-knot an hour — but can go for long distances. And it’s unfailingly obedient.

As of Thursday afternoon, the submersible had meandered 134 nautical miles, to the southern end of Long Beach Island. It has gone down to 120-foot depths and zigzagged its way to seas as far out as seven miles.

The glider has been taking constant readings of dissolved oxygen, salinity and temperature. It resurfaces every two hours, when it transmits recorded data to technicians at Rutgers University’s Coastal Ocean Observation Lab.

But a census of sea creatures commissioned by the DEP and undertaken by Rutgers each of the last three years has shown ocean life that might be most compromised by a dearth of oxygen in those waters is in fact thriving, Schuster said. This has lead researchers to think the stratification, which is now breaking apart as climate patterns shift to cooler weather, is a normal occurrence and not attributable to otherwise adverse conditions.

Darvene Adams, the EPA’s monitoring coordinator for the region, agreed, saying much of what is happening under the coastal waters "appears natural." But, she said, more data might be needed before state and federal authorities submit to getting the designation lifted.

"This is giving us a good idea," Adams said. "There’s not been much done in the ocean. So we’re kind of cautious."

Ocean water sampling used to be done by "grab samples," from boats or helicopters. But because they measured the waters at one point in time, rather than on a continued basis, the data collected gave incomplete pictures of the ocean’s overall health, said Josh Kohut, an assistant professor of marine and coastal sciences at Rutgers.

"You can’t always set a number, because it doesn’t accurately reflect what’s going on," Kohut said. "Now you can see the most recent data within minutes of (the glider’s) resurfacing."

But the project is not state vs. feds. In fact, the EPA grants helped purchase the $110,000 glider that’s combing the waters right now.

Rutgers has 18 gliders, each custom-equipped and tailored to its mission, with some tailored to reach ocean depths 1,000 feet deep. Two were deployed during the BP oil spill