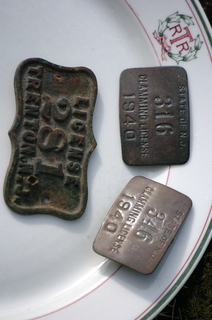 (Above: many readers have said they enjoy seeing my diggings. Well, I scored some really fine items near Mathistown Road. These are three solid brass licenses. The two are obviously for clamming. Even experienced antique dealers said they’ve never seen one of these before. The other brass license item is the real baffler. It weighs a ton and in obvious a serious “license” of some sort. I have no idea what it allows, though. Interestingly, if I was a better researcher, I’d head to Trenton to go through archives and find out what 1940 clammers owned these clamming licenses. Dollars to donuts the names of these clammers would be well-known locally. Maybe when I retire I’ll do that research. Yeah, right. My retirement fund consists of, well, these three brass licenses.)

Well, it ain’t half bad out there and a few folks are on the beaches trying for their first bass of 2008. Unlike last year when it was actually a shoe-in to grab a January striper, they are so rare this winter that I will gladly announce with detail any bass being caught – kinda like the way they announce the first baby born in the New Year. Please email the details so I can give due recognition to the beloved.

A far surer thing is hitting the way-out wrecks for whatever winterized goodies they had to offer. Apparently the tog are showing well but no word on whether any cod are still in the system despite ongoing overfishing.

It is remarkable the number of fishing folks bombarding the Assembly speaker Joe Roberts, urging him to post the Artificial Reef Bill before the full 80-member house.

I got a second-hand report from Trenton on the super sound-off by anglers across the state. And politicos should take notice of the “across the state” aspect. There has long been this infantile notion among lawmakers that stuff like striped bass regs are a purely “coastal issue.” The sooner they realize that surf fishermen are, in large part, not fulltime residents of the coast, the sooner they’ll realize it their own constituency talking to them on issues like the Artificial Reef Bill. Reelection is definitely on the line when ignoring that fact.

Still, there are only a couple of legislative days left, Monday and Tuesday. I believe the state constitution requires the ending of business on Tuesday at noon, not sure though. I haven’t received any last-minute word on where things are going on this issue. NOTE: The Legislature is still dealing with 2007 issues, despite what the calendar reads. That is also permitted through the state constitution.

By the by, all is surely not lost if the bill fails to make the governor desk and has to go back to square one for 2008. Yes, it will mean more work by anglers and angler groups but it’s not like we haven’t been there before, constantly re-firing for the likes of bass and fluke, the later being re-explored with vigor virtually every year. A delay like this will allow the singling out of senators and assemblypersons voting against the bill. Word can then be given to them about the folly or failing to represent their constituency’s wills.

Anyone with insider information out of Trenton, please let me know. A lot of folks check this site and many see this bill as very symbolic of efforts to establish sensible fishing practices between commercialites and recreationalists.

A DOLLAR FOR MY THOUGHTS: There is a wave of take-action protest rising over the newest one-dollar coins, about to be released from the U.S. Mint. The new series of coin dollars will trace the presidents from Washington through Nixon, similar to the manner quarters over the past decade featured all the states.

The protest over the presidential dollars centers around the alleged removal of the “In God We Trust” motto, seemingly in response to that bitter minority – over-represented by the American Civil Liberties Union – who are living their pathetic lives to foster national atheism in the name of “separation of church and state.”

However, there may be a significant misunderstanding about these new coins, likely based on folks who see just the obverse (front) and the reverse of the dollars. The “In God We Trust” is there, big as day – if you know where to look. The words are incused around the edge. The date ands mint marks will also reside there. I think the “E Pluribus Unum” will also be there in future coins.

By the by, this is NOT to “hide” the words, as others claim. It is purely an artistic thing – requested by the coins designers -- to allow for the greatest amount of coin space to go to the portraits of the president. This also makes them more identifiable as dollar coins and not quarters, the nearest-sized coin. The failure of dollar coins such as the Susan B. Anthony and Sacagawea came about because of the difficulty in quickly recognizing them as dollars and not quarters.

Since there are few if any options for tweener coin sizes – short of the costly and irritatingly large original “silver dollar” size – the idea came to make one-dollar coins visually distinctive. Again, there is truly no effort to “hide” or “eliminate” the motto or I’d be among those screaming to high heavens.

Oh, one other thing. For those wanting to protest the new coins because of the placement of “In God We Trust” by boycotting them, I’m behind you in spirit and to demonstrate this I’ll be accepting any and all those coins protesters throw out -- as a way to, uh, measure the level of protest. I’m very civic minded, eh?

Comment by ronk654 on January 5, 2008 at 2:39pm
We also need to contact our local assembly members and put some pressure on them too. They have to understand that they will wind up paying the price for his inaction.

Comment by ronk654 on January 5, 2008 at 2:40pm
We also need to contact our local assembly members and put some pressure on them too. They have to understand that they will wind up paying the price for his inaction.