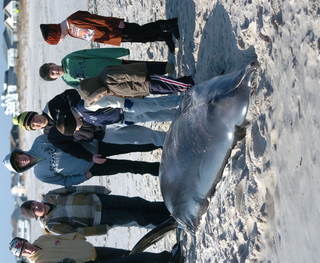 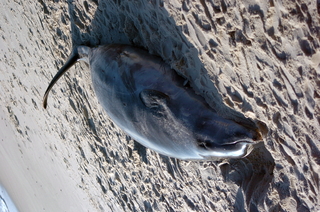 There was quite a turn-out on the beach at Holyoke Avenue in Beach Haven as an exceedingly rare True’s beaked whale washed ashore, DOA. It rolled in about 75 yards south of the famed Holyoke jetty.

The 15-foot, one-ton marine mammal had seemingly been healthy not long ago, as evidenced by the fact it had copious amounts of blubber and even showed signs it had recently eaten. No serious wounds could be seen on the exposed side of the whale. It had fresh scrapes on its belly, likely from rolling over the nearby barnacle-encrusted jetty rocks. There were also some odd-ish holes in its skin, though none were quite round enough to be bullet holes. It probably died last night.

Throngs of folks, including loads of vacationing kids, gathered to see the extraordinary stranding. True’s beaked whales are among the rarest in the world so it truly was a sight to be seen.

I was warning folks about petting the dead mammal, though not many listened. There is always the very real danger of pathogens on the skin of any dead animal.

Bob Schoelkopf of the Marine Mammal Stranding Center in Brigantine was on-scene about an hour after Stu D. called in the stranding. Bob also warned of the disease danger of any stranding of unknown cause. A number of dogs, brought by onlookers, were sniffing the whale. That’s a real unhealthy exchange.

While I expected Bob to offer the usual “illness” or “prop strike” as his initial conjectures on the cause of death, he blew me away with talk of deadly U.S. Navy sonar, which has likely been responsible for numerous deaths of this species of whale, which seems unusually sensitive to the pitch of the sonar used by subs patrolling the coastline in the name of national security.

Bob said that significant die-offs of True’s beaked whales were seen recently near the Bahamas. An expert who happened to be there at the time did a work-up of the dead mammals and found indications of devastating damage to the ear canals and the entire neurological systems of the deceased creatures. The expert suspected Navy sonar but was at first rebuked by the military. However, the Navy later admitted to the use of specialized sonar in that vicinity, though drawing short of accepting blame for the dead whales. I’m researching that stuff on Google and will do any follow ups I might find.

The Holyoke whale is going to be transported to a special facility, I believe in Pennsylvania, to be autopsied. I left before the equipment arrived to haul it off.

I’m guessing the cause of death will be less dramatic than Navy sonar but I have to admit the creature looked amazingly fit – short of it being dead as a doornail.

On a bizarre but appropriate note, that 2,000 pound creature would be worth a small mint on the sushi market – many hundreds of thousands of dollars. It seems the Japanese are particularly drawn to the rarest whales to try out taste-wise. This rarity would have likely brought $10 for three tiny piece of meat (less than an ounce) on sushi rice. NO (!), I’m not a proponent of such epicurean idiocy. In fact, the latest whaling effort by Japan fishermen is despicable and essentially screams, “Screw you!” to the realm of world conservation of diminishing populations of marine mammals.

More local fishing stuff as I get it.