Above: Juvenile brown shark. Fairly lean and long in shape. Note notched upper part of tail; large eyes. Below: Bull sharks have some of the smallest eyes in the Selachimorpha realm. As the name indicates, bulls are very stocky -- and bully aggressive. The adult bull shark below hasn't missed many meals. They can run a bit leaner than this example. . 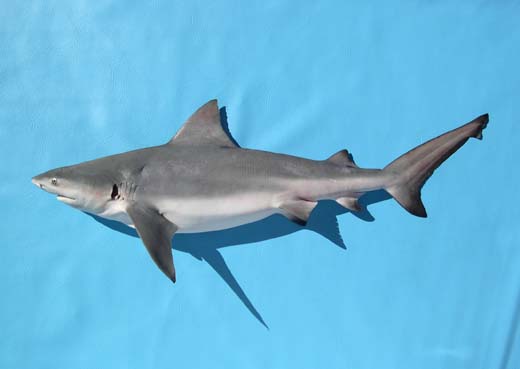 July 12, 2012: We picked up a load of surf from a distant storm. Waves are 3 to 5 feet. It’s making for serious sinker demands from folks surfcasting. It’s also gonna be seriously hard to fluke in the suds and surge, much less panfish for kingfish.

On the possible upside, there should be a fair showing of small to just-keeper stripers feeding within the stir. Clam baits are always effective and affordable baits, though bunker opens you to bluefish bites (if wanted).

I like pompano rigs in these conditions. Somewhere in my dozens of tackle boxes (hoarder that I am), I have a slew homemade pompano rigs made with fine wire. They worked perfectly when expecting both bass and bluefish action. Real easy to make with parts found at local tackle shops. If going with floats (always), try to use natural cork whenever possible. It’s just an organic thing.

If you’re heading into the water after-hours, use utmost care. The rips are going to be of the sneaky sort. Things will go swimmingly for goodly stretches, then you’ll find yourself getting all but flushed out to sea. Remember to yell your ass off – and/or wave arms vigorously overhead -- if you get in way over your head. That doesn’t mean you gotta panic, just the opposite; you’re signaling for help. It’s comin’.

Below is an email regarding a shark’s stalk in the bay. I’ve actually been fielding near nonstop reports and emails regarding sharks and sharking. Not all of them are aimed at my column or websites. Many are from Facebook or even via scientists I know calling to ask why there are so many shark reports showing up.

As to that, I honestly think the recent load of shark talk has a lot to do with NJ anglers once again going large on the catching (and releasing) these often huge fighters – though a 20-pound bluefish can top the fight of certain three-figure shark – makos and threshers not included.

As recently as the 1980s, fun sharking was huge among Jersey anglers. Then came the catastrophic post-“Jaws” deadly targeting of all sharks for fun killing -- then, commercially, for finning.

Shark overfishing became overly obvious to the Marine Mammal Stranding Center, which began caring for countless marine mammals that would previously have been devoured – in an ecologically sound manner – by sharks.

Now, it’s plaudits to conservation efforts. The men in gray suits are making a fairly stunning comeback in many US waters, with a number of faster reproducing species, like browns and duskies (locally), taking the comeback lead. Of course, exchanges between sharks and humans will see a serious upswing – even swingier than we’re seeing now.

(Jay, I was on my standup paddle board yesterday around 10 am in the bay cove behind the LBIF and I saw a shark. He was following me and his fin (about 2 1/2 inch) was sticking out of the water. I couldn't see how long he was since he was behind me. I paddled fast to get to the wetland away from him and he finally disappeared. I had to paddle back to dusty miller and gratefully I didn't see him again. Has anyone reported anything similar? Houda Silcock )

The bay is currently filled with smaller brown sharks – with, allegedly, some bull sharks mixed in.

I bring up that bull shark angle only because the behavior you describe is identical to a bull shark’s curiosity, or following behavior. Brown sharks seldom if ever surface display like that, much less during the daytime.

By the by, the single fin you saw would surely have been the much taller tail, not the dorsal -- meaning it might have been closer than it seemed at a glance.

While it would be easy and a bit exciting to attribute the closeness of the trailing shark as a pre-attack posturing, I can all but guarantee the stalking shark was obsessively interested in what was hiding beneath your paddleboard. At some point, forage fish were either being attacked and took refuge below the board or, as you paddled along, forage fish began gathering below it for protection – as they’ll do with just about any floating or surface object.

That said, I’ll repeat that bull sharks are one of the only sharks willing to show themselves, full-Monty, in the daylight. And they’re maybe the only sharks that show near disdain for any threat from humans. That makes your report very interesting.

SIDEBAR: During my decades of clamming, my partners and I had many a big brown shark quickly dorsal up in the water all too near us – usually just a quick fin flash or two. I now realize those sharks were in the muddy shallows taking advantage of the turbidity we were creating – feasting on disoriented crabs, which they detected through eletro-receptive organs.

Of course, we always thought a fin meant an “attack!” We would respond with the dumbest possible move: splashing like crazy people as we tried to run back to the boat -- though never letting loose of our baskets. We all knew that if a shark shows up and you’re too far from the boat to run back to it, climb into the basket. I kid you not. There were times you’d see a whole slew of clammers all standing atop their sunken baskets. In fact, if you looked over and saw just one clammer atop his basket, you didn’t wait around to see what had chased him up there – you went topside. I recall old Lushy Louie would always take a ciggy break during basket-top shark escapes. You’d look over and see his tall, scraggly, sun-pruned body seemingly standing on the surface of the water, prophet-like, as he casually puffed away.