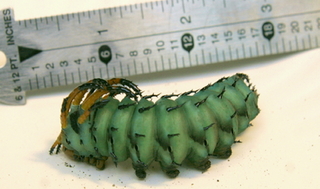 (Above: It’s as weird and foreboding a creature as I’ve ever dug outside the tropics. This three-inch long caterpillar/larvae-like monsters was just under the ground in Bass River. It flips back and forth when agitated and it’s intent is clearly to drive home the spikes it has all over its body. I have no doubt they have some juice that is meant to administer discomfort. I believe it is called a green dragon, though it is much more ominous than the photos I’ve seen of that species. I have no doubt those folks who create science fiction models would love to have one of these on hand when devising new creatures to attack Jamie Lee Curtis. It was released back into the wilds after SandPaper photographer Jack Reynolds got some pics.

Friday, August 17, 2007. Waves: A bit larger than they’ve been, maybe 2-3 feet, medium-period out of the south. Water clarity: Excellent. Water temps: getting balmy.

Ocean water temps (nearshore) are making up for lost time. The first half of the summer saw unusually lower-than-normal shoreline water temperatures. Now things are back to normal and then some. Temperatures today -- and especially over the weekend – will likely be in the upper 70s, with 77 being the average from Sandy Hook to Cape May for today.

Downwelling will be contributing to the higher water temps. That affect is opposite of upwelling, when hard or persistent south winds blow in icy cold water even in summer. In Downwelling, caused by northeasterly or easterly winds, we’re actually the recipient of warm surface water being blown ashore. That is especially true when the winds are light onshore (say, between 8 and 15 mph) for over 24 hours, which will be the case starting tonight and continuing through Sunday night.

As for the fishing during those winds, it should be doable with a slight problem for small craft heading into the ocean. Nearshore drifting may need some extra lead – or larger jigheads.

Jay, I agree that the summer bluefishing is fast and furious but it’s also getting a little tired right about now. I’m finding them everywhere as I look for weakfish. I’m even catching them on my fluke rigs. I read what you said about bass arriving late. I thought they came back as the mullet run…”

(Yes and no. The mullet run always elicits some bass (resident fish) response but in recent years the bass and mullet have simply not had the same marching orders to any great extent. That is what I’m thinking will happen again this fall.

The mullet do, in deed, travel on the calendar (astronomically speaking), though even they have a tendency to stop in their migratory tracks if the weather gets very hot. It’s almost as if a batch of hotness get them thinking they’ve reached their Deep South destination in a damn-that-was-easy way. It is the later-than-mullet runs of spearing, rainfish and (especially) baby bunker that have been aligning with the big bass being in-town.

A very interesting baitfish factor I haven’t mentioned much is the insane showing of ocean herring we’ve had all summer. There are a number of folks around Barnegat Inlet that are fishing them for fun and taking them one after another. These hefty baitfish are a favorite of big bass. I use them all fall down Holgate way.

Spot have been oddly spotty for the last five years or so, after being thick as bricks back in the 90s. However, spot are historically famous for coming and going. In fact, they are also called Lafayette, based on their being around in cloud-like numbers when famed Soldier of Fortune and U.S. Major General Gilbert du Motier Lafayette visited a shore resort to fish back in the late 1700s. The spot were gone the following year, making it look like they were there just for Lafayette. Personally, I think spot are the top bass-getter of all live-line-ables. They are also candy to weakfish. J-mann)

ODD FINDS OF THE WEEK: While nothing will match the green dragon pictured, I found a couple excellent fossilized sharks teeth in the gravels of Surf City. They were obviously uncovered during the beach fill. I’ve been collecting paleo-material (sharks teeth, dinosaurs teeth and bones) for many moons. The ones I found in Surf City have an interesting rust color, making them very displayable and great for jewelry making.

Despite being so similar to modern sharks teeth, these are from the early Cretaceous period, or approximately 92 million years old and were surely bedded in marl at one point. Marl is sometimes called Jersey clay. It is grainy, often sand-like and green. Those large chunks of smoothed greenish-gray rocks that wash up – and rest among shells – are hardened (compacted) marl deposits.

If you’ve heard of any other odd beachcombing finds in Surf City, please let me know.

When they pumped in sand for the beach fill up toward Sandy Hook, a stroller found a chunk of Cretaceous amber the size of a volleyball. It was likely loosed by the project and washed ashore later, since filters in the dredge pipes keep items that large out. Since amber is very light it can wash around very easily. Much of the original Baltic amber (Europe) was washed ashore during big storms.