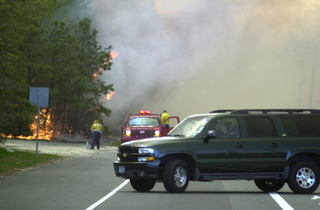 EMERGENCY BLOG: Scary as all get-out -- but fully impressive. That’s my read after being in the woods right where today’s huge wildfire came onto route 72.

I had taken a break from the paper – where I’ll be till all hours tonight.

I went to my favorite put-in road right off Route 72, near the Barnegat/Stafford border.

I knew there was a fire quite a ways to the south, Warren Grove-ish.

Deciding to just scratch around thereabouts – a semi-fateful decision – I started getting bugged by the smoke in the air. I jumped in my truck and nonchalantly drove out and toward Route 72. Within minutes, I kid you not, the smoke moved in so thick it was scary. The smoke crossed 72 as cars heading west opted to either turn around or power through the total blackness. At one point a fuel truck plowed into the smoke.

A lone Forest Service truck was holding up the Route 72 end for about five minutes. I got a shot of them waiting at exit to the new Paramount Escapes housing development.

The scariest part was the way smoke engulfed the Pinewood Estates and Brighton at Barnegat trailer parks. It was so thick you couldn’t see ten feet. I’m now getting word that a number of trailers were destroyed. That’s very disturbing since I know the older folks who live back there and they’re not millionaires by any stretch.

By the by, much of that early Rte. 72 smoke was part of a back burn effort by the Forest Service. That entails lighting smaller fires ahead of the main fire in order to eat up the fuel supplied by underbrush. And there has been a load of underbrush of late, as late-blooming Pinelands plants are barely showing green while being surrounded by dry and seasoned dead brush. Fire danger, according to the Forest Fire Service, was “Extreme.”

I hung around getting photos until the cops finally evacuated everybody in sight. I could have dipped into one of my off-roads and kept on shooting but I was kinda getting queasy on the smoke.

Once again the Air National Guard is on the hot seat. Apparently one of its aircraft started the fire, this on the heels of accidentally strafing a grade school and starting no fewer than three major fires in the past.

We need the gunnery range back there but the Air Force just has to choose its flights a little better. “Extreme” fire danger is not the time to be launching flares.

In case you’re wondering, those flares, referred to as IR countermeasure flares (sometimes called decoy flares), are systematically deployed into the air while an aircraft performs strafing and bombing runs. They are meant to attract infrared-detecting or heat-seeking surface-to-air or air-to-air missiles before they hook onto the heat signature from an aircraft’s engines. I’m not sure how necessary they are in the woods around Warren Grove, where the number of SAM (surface-air-missiles) is pretty low – deer just can’t seem to figure out those contraptions.