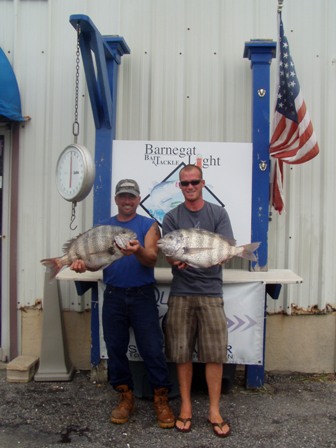 ABOVE PHOTO (PER BL Bait and Tackle website, angler Bob Misak) “My son and I fished with Jay Close on Saturday, and we had at least thirty blackfish, with three hefty keepers for the table. We had just gotten started when Bob Jr. blasted a 13 lb. 5 oz. sheepshead. He took the net and left to ice up the monster when I got one on. Jay Close jumped down on a low rock and jammed his finger in my fishes’ mouth and tossed him up on the jetty. The fish clamped down on Jay’s hand for a good twenty second blood pumping moment, then let go. The 2nd sheepshead was a twin to Jr.’s at 13 lb. 5 oz. Both fish were 27 inches on the nose.” Monday, September 15, 2008: Waves: Dropping 2-3 south swell. Winds: Strong west (already). Water clarity: Stirred by hard south wind s but cleaning up rapidly. Jingles reports surfcasters are having a great time, as long as you like catching small fish: bluefish, croakers, kingfish. Margaret said that kingfish are shining in town. Nice-sized kingfish are coming in at an average of half a dozen per angler, with “one guy” taking 20. “Some people are reporting the best fishing they’ve had since little kids,” said Margaret. Barb at Surf City Bait and Tackle also noted the kingfishing is good, mid-Island. Oddly, sandworm pieces are easily outcatching bloodworms. Mullet rigs are besting small blues, to 2 pounds, “There are also lot of shark and skates,” said Barb. BL Bait and Tackle is the first to report some mullet-based bass, mainly small stuff along the beachfront -- but a sure sign of things to come. The shop has also weighed some find sheepshead taken on the New South Jetty. I had noted over the summer that the bay, especially around the Causeway Big Bridge, had a very good showing of this one-time populous species – which eat as good as any fish out there. Buddied up with the sheepshead are very large tog, hanging around to fatten up before moving offshore. Bluefishing has gone bonkers at Barnegat Ridge. Choppers of a ferocity above-and-beyond the usual mayhem level are there in arm-fatiguing numbers. Some boats are turning to tuna gear. The false albie count is also through the ceiling. Flying fish can be seen near the ridges. ^^^^^^^^^^^^^^^^^^^^^^^^^^^ Here’s a pro report form Pop’s Pride: ”Pop's Pride went to the famous Barnegat ridge Saturday and enjoyed the best troll trip of the year. The false albacore were hungry but they were wimps compared to the gorilla blues who were as fighting mad as a bluefish can get. The final count was 3 blues kept and 30 released plus 15 albacore released. Our bonus was a calm ocean and a sunny sky were our reward for a conservation based fishing trip ”Item #2 Friday was a uncomfortable fishing day but we caught lots of croakers. Traveling back to the bay we found a patch of blues who were hungry. The result was a great 1/2 day trip with lots of fish for dinner. ^^^^^^^^^^^^^^^^^^^ Here’s a BHM&TC tourney report: Director: Tim Irons and Gary Roberts Weigh masters: Roger Zelles and Mark Zoladz and Tim Irons # of Boats: 9 # of Anglers: 38 TUNA 1st Place Shawn Dilkes Processor 64.60 Lb BF $ 150.00 2nd Place John Fitzgerald Four the Boys 30.70 lb BF $ 125.00 3rd Place NO QUALIFYING FISH WAHOO 1ST Place Rich Stracensky Hot Tuna 22.60 lb $ 150.00 DOLPHIN 1ST Place Mark Parker ABC 16.30 lb $ 150.00 SWORD FISH NO QUALIFYING FISH WHITE MARLIN NO RELEASES BLUE MARLIN NO RELEASES -- The Beach Haven Marlin & Tuna Club beachhavenmarlinandtunaclub@onebox.com ^^^^^^^^^^^^^^^^^^^^^^^^^^^^^^^^^^^