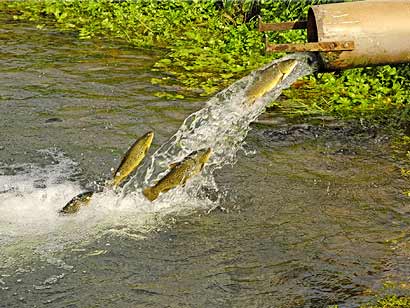 (Above: This trout hatchery was baffled by the unexplained loss of its fish, blaming everything from raptors to poachers. It was this photo taken by a tourist that offered the astounding answer. The trout were jumping into this inflow pipe, fighting the water flow all the way back to a source reservoir , where the fish eventually found freedom. Wow. Give those fish some sorta reward. ) Thursday, July 24, 2008: Waves: Large: push of medium period swells to 4-6 feet and grinding; loads of south to north current. Water clarity: A turn for the better; east winds for a while yesterday wasted no time pushing in clearer and cleaner water; hard south winds today could much that up. Water temps: Slight uplift to low 60s, though still pockets of nasty cold water; temps could upwell and drop again as south winds just won’t quit. There was a sigh of relief from the Pinelands last night as a downpourous dousings took place via heavy t-storms. The heavily moisturized storm cells also reached LBI – and offered a touch or relief to browning lawns. However, such hit-or-miss storms do very little to break a drought – when water tables lower, needing massive long-term input of moisture, best offered by something like a tropical storm rain. Even during cloud bursts with over 2-inches of quick-order rain, the moisture only makes it down a few inches before the thirsty earth absorbs it – or warm surface sands evaporate it away. Fortunately, we are looking at a very protracted period of unstable moisture-laden weather. That’s not the worst thing for fishing. Along with subdued lighting, unstable weather can be marked by periods of lighter winds. It’s getting obvious that we need something to snap these southerlies. As for angling, it’s summer (in case you hadn’t noticed) so many folks are fighting the systems (weather) to make some hay before the season ships out all too quickly. Many folks are going out near port to work on what continues to be as astounding a showing of fluke as we’ve seen in possible decades. Readers get miffed when I write that when they haven’t got a take-home fish after 30 throwbacks. Sorry, but the fluke fishing is fine – the keeping fully sucks, admittedly. I went out to do one of my backbay creek checks to see where we stand with bunkies and mullet – which actually begin to drift seaward very soon – sometimes taking upwards of an entire month to reach the inlet zones where they’ll muster for migration. Well, I managed three casts of the net and despite soaking myself in industrial grade bug repellent I couldn’t stand the greenheads and biting flies. They are simply the worst I’ve ever seen, so much so that usually crowded bayside crabbing sites are totally absent of trap-throwers. Here’s a composite report form Jim H., writing for the BH Charter Fishing Association: The boats of the Beach Haven Charter Fishing Association are continuing to find plenty of action on undersized fluke, but keepers are still hard to come by. Captain Lindsay Fuller on the “June Bug” took the Zalewski family from Newton bottom fishing. Fighting cold bottom temperatures they managed to boat a number of fish, but none of legal length. The group enjoyed the weather and ay on the water. Another day Captain Fuller fished the Patterson family from Haddonfield. Rebecca, nine, and Decker, six, worked very hard catching short fluke, skates, and sea robins. On their last drift at a secret spot of mate Nate Figley, the kids boated a 19-inch fluke to take home. Captain Frank Camarda fished the “Miss Beach Haven” in the bay recently in order to find some warm water. There were not many keepers but ton of action on fish up to 17-inches. The incoming tide brought non-stop action. On Saturday the “Miss Beach Haven found a patch of fish in the ocean holding several keepers along with some ling. Pool winner was Darrel Vandeleur of Hamilton with a 4-pound flattie. Captain Adam Nowalsky of the “Karen Ann II” reports a change in wind direction brought a return to some decent bottom fishing. The Dave Young party had a mixed bag of ling and sea bass to 3-pounds while Robin Cunningham and Linda Yost caught some nice sea bass on a half day trip. Nowalsky tried a tuna trip to the 20-fathom line but only picked up some big bluefish. Captain Fran Verdi of the “Drop Off” had the Van Orden party out for some reef fishing and they picked up nine keeper sea bass to 19-inches. The Butterworth party ran into some problems with thick fog but managed 8 keeper sea bass. Captain Dave Wittenborn fished the Garden State South Reef with Ed Lawson and party and managed a handful of keepers. The catch of the day was a 6.22-pound blackfish which it a fluke rig baited with squid and spearing. On Sunday heavy fog forced him to fish the fish factory area of Great Bay for fluke. They had some keepers but the throwback ratio was 12-1. Gulp bait on bucktails worked best. Wittenborn snuck a trip to Lemke’s Canyon for tuna around his fluke trips. He saw signs of tuna in the 77-degree water, but rough sea conditions made catching difficult.

Comment by HARRY FEINHALS on July 25, 2008 at 2:39pm
Jay, I agree with you. The fluking has been great but the keeping rotten. There's an awful lot of 17.5" fluke out there and as long as the ocean stays cold, they probably will stay in the bay. Gulp rules!