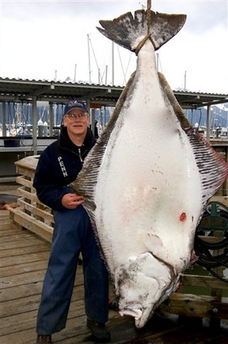 "Finally, a keeper fluke!" - Wednesday, July 09, 2008: Waves: 2-4 foot short-period south swell; potential of swells from H. Bertha. Water temps: Upwelled once again; cold; some surf temps as low as 52 degrees. The winds really kicked in today; south gusts to 25 mph. Cloudy weather did keep a subdued lighting in play as folks worked the bay for flounder. It’s a broken record but the reports say the fish are an easy catch. Also echoing: The fish are often just below keeper size. Ditto: GULP! is the top getter, especially when coupled with minnies or spearing. Here ‘s part of an informative JCAA report: JCAA and Garden State Seafood have provided funding to the Partnership for Mid-Atlantic Fisheries Science Inc. to send Dr. Eric Powell, Emerson Hasbrouck, and Bruce Freeman to the meetings for the summer flounder benchmark assessment in Woods Hole. In addition, Dr. Mark Maunder is being paid by SSFFF. They are providing an independent scientific review of the data available. They are uncovering multiple gaps in the data that is used for decision making. Their input is proving invaluable. The upcoming review process is very complex and doesn’t take place in public. We don’t know how the review team appointed by NMFS will choose to evaluate the data and make recommendations to the Scientific and Statistical Committee of the Mid-Atlantic Fisheries Management Council. Once the benchmark is completed, which is where the public has an opportunity to make suggestions and recommendations, the review team moves behind closed doors, out of the sight of the people most affected by their decisions, and has total authority to adopt or ignore all the recommendations made during the benchmark assessment. They’ve obviously never heard of the "Sunshine Law" and in the past, have totally ignored the negative impact of their decisions. JCAA’s concerns are specifically about summer flounder but more generally about the arbitrary and secretive nature of the process. We are in the process of developing a set of recommendations to bring to Congress to discuss necessary changes in the process. If we are stuck with the Magnusson/Stevens Act, at least we need for the review process to be more transparent and more responsive to the public. SIMPLY BASSIN’ PAYOUTS: Just wanted to let winners (and contestants) that the Simply Bassin’ 2008 was the best yet with over 200 entrants. That means the winners will receive the full payouts. The money will be in the shops by this weekend (most shops by tomorrow). Go where you weighed in your fish to pick up cash. Again, congrats to those top spring bass trackers. WINNINGS: 1st Place - $1,000, 2nd Place - $800 3rd Place - $600 4th Place - $500 5th Place - $400 6th Place - $200 7th Place - $150 8th Place - $100 News release: “The House took steps Tuesday to keep shark fins out of soups served in pricey Asian restaurants. “In a voice vote, the House tightened a 2000 law that bans the practice of shark finning, whereby mainly Pacific Ocean fishermen cut off a shark's fin and throw the dying fish back into the sea. Shark fin soup is a delicacy in some Asian countries. “The bill on sharks, whose populations are declining worldwide, prohibits vessels from having custody, control or possession of shark fins without the carcass. It closes a loophole in the 2000 act under which vessels were sailing into international waters to purchase shark fins from fishermen engaged in finning and then bringing them back into U.S. waters. “The provision was in part a response to a March federal appeals court ruling in favor of a vessel engaged in transshipping shark fins from foreign finning ships. The court said the ship, stopped with 65,000 pounds of shark fins worth more than $600,000, did not violate the law because it was not a fishing vessel. “The bill, which now goes to the Senate, also makes clear that shark fins aboard fishing and other vessels and those landed at a U.S port be naturally attached to the carcass. Current law makes it a violation when the total weight of shark fins on board exceeds 5 percent of the total weight of carcasses. 'Sharks are vital to the health of marine ecosystems, but the practice of shark finning is driving their decline worldwide,' said the bill's sponsor, Del. Madeleine Bordallo, D-Guam. “The National Coalition for Marine Conservation, in a letter to lawmakers urging support of the bill, said that since the 1970s shark populations around the world, including many species in U.S. waters, have declined by 80 percent or more. 'Driven by the lucrative shark fin soup market, the greatest threat facing sharks is a cruel and wasteful practice called finning,' it said.”