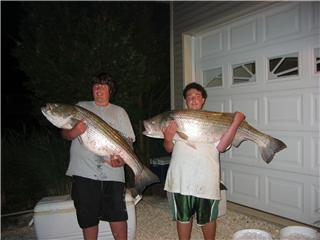 (See email below) Monday, June 23, 2008: Waves: Choppy 2- 2.5 feet, south wind swell. Water clarity: Variable, but mainly dirty. Water temps: Stuck in the mid 50s due to steady south winds. Out a ways, water temps are mid-60s, as was the case for those fishing makos over the weekend. Kingfish are on-scene. Some are larger brands. Boy would many of us love to see an upbeat kingfish year. Most of you recall that maybe 5 years back we had a super push of these top-tasting bottom feeders, which hung around throughout the summer and came in heavily during the fall migration. The reason for that resurgence was likely due to the collapse of the Carolina shrimping industry, which had annually taken millions of small kingfish as by-catch. (That industry openly claimed to kill upwards of one billion croakers as by-catch.) Since then, the yearly kingfishing action has fallen off rapidly. The last couple years we’ve only seen kingfish in falltime spurts. I believe that, concurrently, the shrimping has resumed down south, though I’m not sure of that. It should be reiterated that virtually all fisheries are very cyclical, so the kingfish population swings could be the result of many factors, not the least of which is the impact of a hyper-population of stripers that freely suck down small kingfish. I’ve often found them in bass bellies. QUICK KINGFISH NOTE: Kingfish are yet another member of the drumfish family. They’re not much on drumming, though, lacking that noisy bladder used by the likes of spot, black drum, red drum, croaker, and weakfish. They do make an odd grinding sound – not totally unlike a drumming – by grinding their throat membrane together. I bring up this drumfish affiliation because of the aforementioned possibility that reduced shrimp fishing – and even the use of fish excluder devices by sprimpers -- has helped drumfish of all sorts repopulate. Interestingly, some scientists claim the likes of kingfish overwinter by going directly out to sea, into deeper water, i.e. Jersey kingfish head into the EEZ off our coastline. Anecdotal evidence counters that. It sure seems more likely that our summer kingfish head south then out off the Delmarva – or even off the Carolinas, making them highly vulnerable to shrimping. ^^^^^^^^^^^^^^^^^^^^ Bass news: From my visage, I get all the reports, not just those dealing with weigh-ins and wild times. This latest killer bout of stripering is far from an equal opportunity bite. Admittedly, some folks have a far better feel for the pulse of the action -- and seemingly have an eye for what bunker pods are perking. Still, I have half a dozen counter-reports by folks who went snag-and-drop for hours with nary a touch. It often seems a timing thing. Take, for instance, this e-report from Mike C reporting on two huge bass taken by “the kids.” : “Hi Jay, Took my son Jon-Michael and his friend Colby out to the inlet Thursday afternoon to see if we could find some bass. After many dog sharks the fun began. … Jon-Michaels bass was 50.45 lbs. And Colby’s was 47.50 lbs. Dad became the hero that day. They were aboard the Michele C.” Not only is this a great tale of the kids kicking bass butt but that part about waiting out the junk bite is huge. While there are always those reports of “No sooner did we drop our lines than we had fish,” it’s way more common that anglers have to put in some serious chase time, staying focused and waiting for big things to begin. ^^^^^^^^^^^^^^^^^^^^^^^^^^ The weakfish continue to show, some to near ten pounds. The Mako Mania 2008 Tournament had a huge turnout. Here are the winners. 1st Place: 272 Lbs 87" Miss Diane Frank Rose 2nd Place: 260 Lbs 87" Pops Toy Butch Kross 3rd Place: 253 Lbs 85" Knight Fishing Rick Clary 4th Place: 247Lbs 85" Sweetie Brian Perry 5th Place: 243 Lbs 82" Bout Time John Okinsky 6th Place: 237 Lbs 82" Tashtego ---