Below: You tried to pet a what?! Tuesday, April 07, 2020: It’s fairly official: No surfcasting on LBI until further notice. To make that a tad less dreary, “further notice” might come befor… 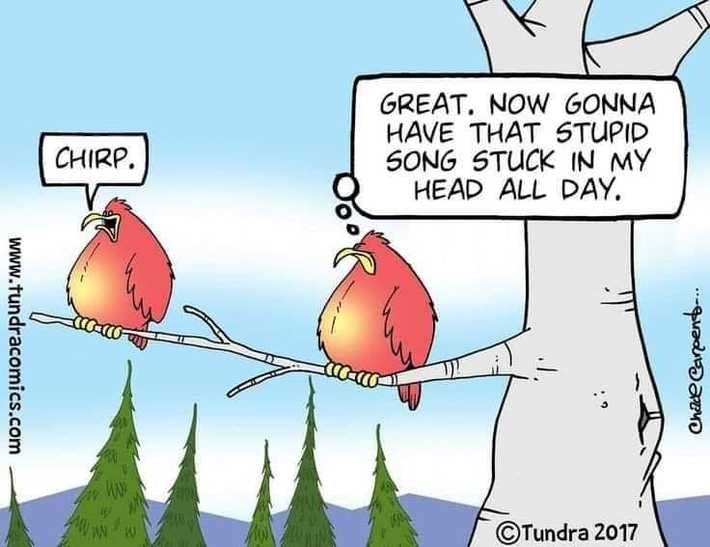 Below: You tried to pet a what?! 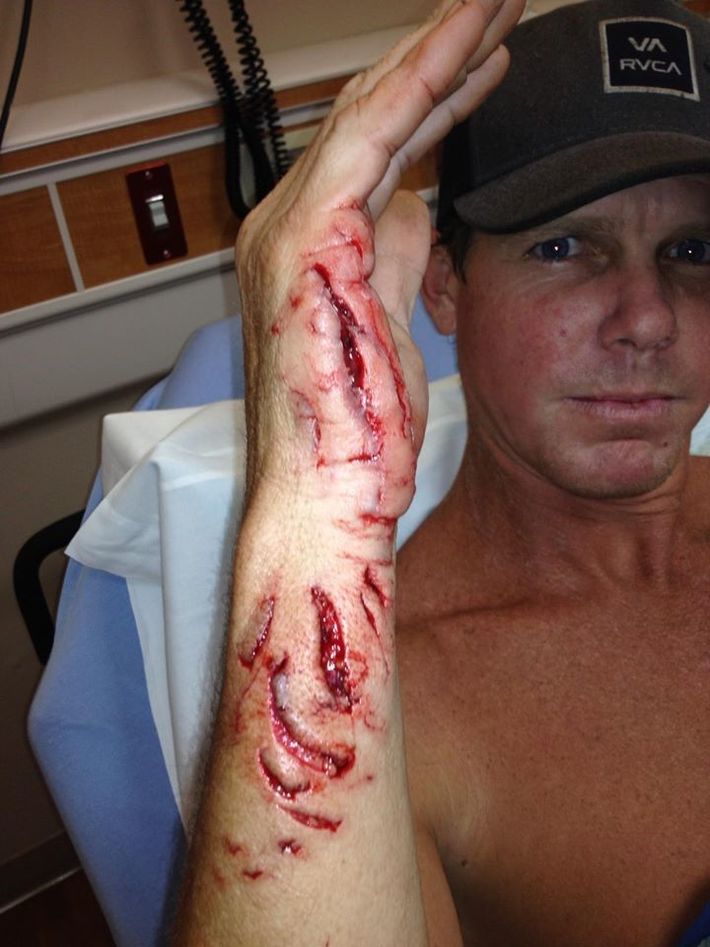 To make that a tad less dreary, “further notice” might come before the big COVID “All Clear” is sounded in Trenton. Based on scant input, I see where Island mayors somewhat agree that surf fishing should be allowed, though only for card-carrying local Island anglers.

If you hadn’t heard, beach usage in BL, Beach Haven, Harvey Cedars and Beach Haven is limited to walking the sand and only if you have – on your person at all times -- a reentry placard specifically for the town you live in, i.e. you can only use a Beach Haven placard on the Beach Haven beach. If you accidentally wander-walk into the township, you can and likely will be shot on sight by marksmen in well-manned concrete COVID bunkers. Problematically, even when walking in your placarded town, itchy-fingered COVID cops might mistake you for what they’re calling “placard jumpers.” Even though it’s called friendly fire, it hurts.

Playing Switzerland is Surf City, which remains open to one and all, even surfers and surfcasters. That doesn’t mean borderline LBT and SB COVOD cops won’t take long distance pot shots at you.  Ship Bottom is playing just plain bad-ass by disallowing any beach usage by anyone – except the cops who get to whiz along the beach on quads, throwing their legs out to the side when jumping sand mounds.

Since I’m rolling in the deep (shit), I’ll also let you know that no bayside bank fishing is allowed unless it’s from your own dock or bulkhead. I’ll guess that the so-called Morrison’s Dock bulkhead and parking area in Beach Haven is closed. I don’t know that for a fact, though. If it is open, you won’t hear it here.

Technically and officially, the High Bar Harbor “Dike” is fully off limits, meaning some of the area’s best spring plugging and fly fishing has gone the way of today’s park closures. Word to the wise, there is a homeowner in that area who could find no greater pleasure than turning in anyone trying to illegally take in the fresh air of the Dike’s mile-long beachline.

Email: “Jay, Are the public fishing areas along the Causeway open?”

I’ll go rogue by saying absolutely. Just don’t blame me when no fewer that six state police cars simultaneously come flying into the parking area, with infuriated staties jumping from their vehicles with sundry weapons drawn, all “Are you outta your mind boy!?” If I’m right about those public areas along the Causeway being open, this is the perfect time to see if any fish can be taken from those areas.

I cannot imagine the Forsythe Refuge closing the Bonnet Island Nature Trail – he says without even asking refuge manager Virginia Rettig. I’ll do that asking tomorrow. By the by, there might be one small fishing area just south of the East Pavilion on the trail. Not sure of the water depth, though.

I’ll also be seeing if the Road-to-Nowhere, Manahawkin, is open. I used to have some very fun fishing what we called the “canal,” -- a 25-foot wide, north/south, arrow-straight waterway located on the south side of the road about ¾ of the way to the end. I believe it requires a freshwater fishing license. The larger “impound” lakes along that road can have some fun fishing though every fish there has been caught and thrown back many times over. Please, drive the road slowly. There have been accident and even an awful fatality caused when speeding vehicles have hit potholes or corduroy surfaces and careened out of control. There used to be a monument where the victim died. 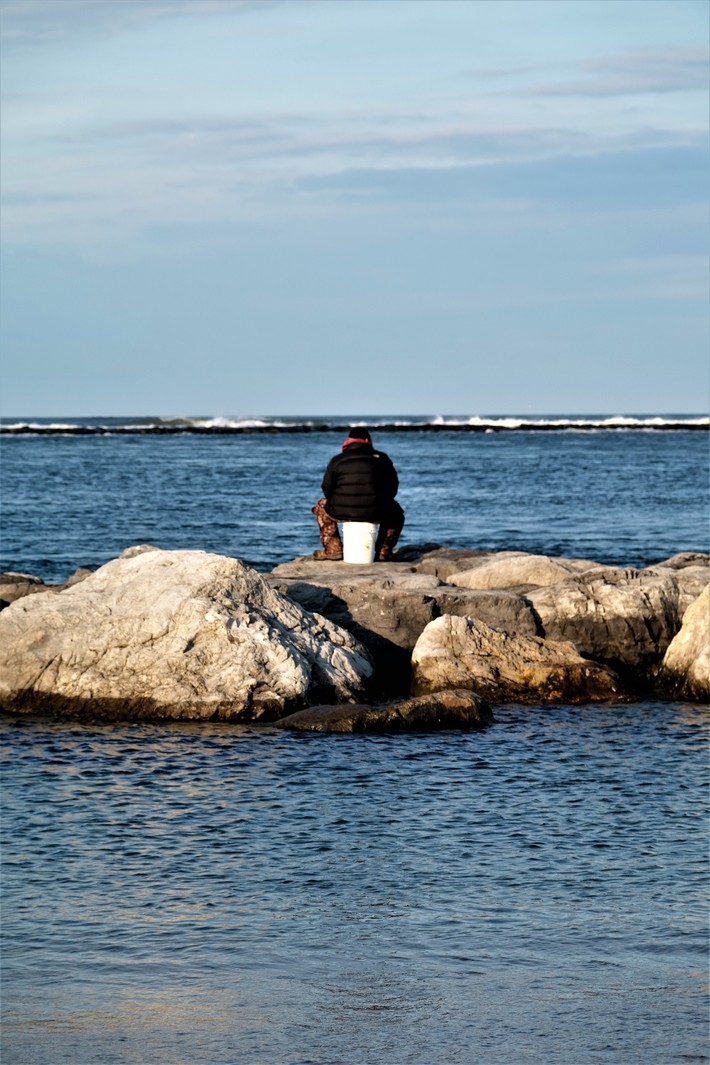 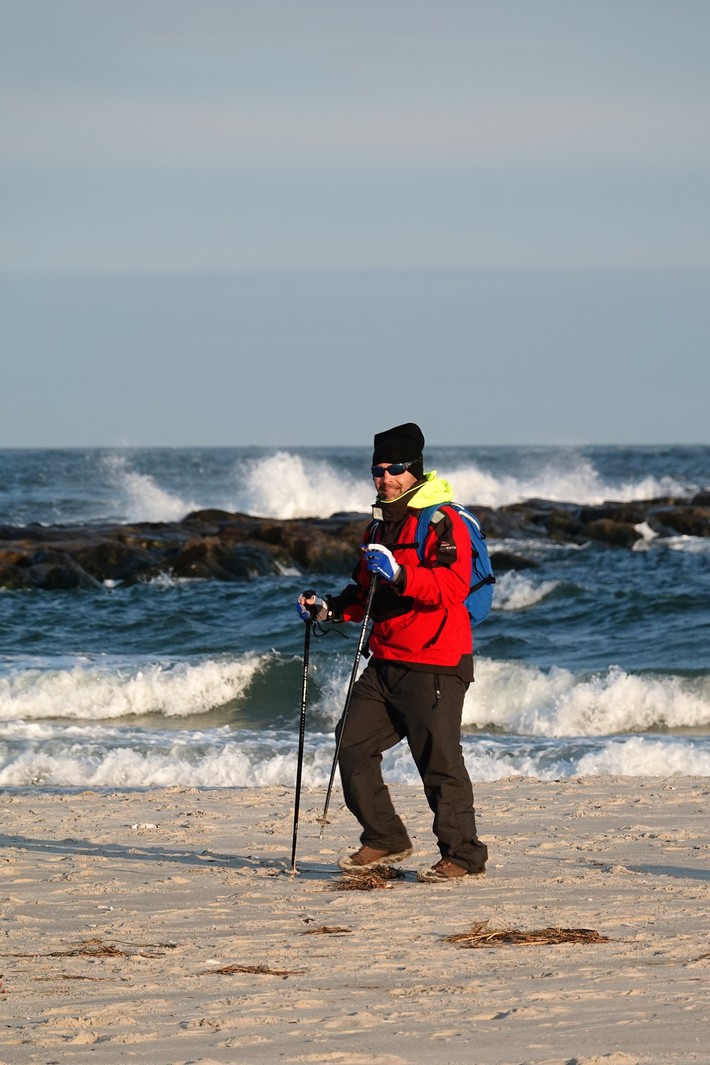 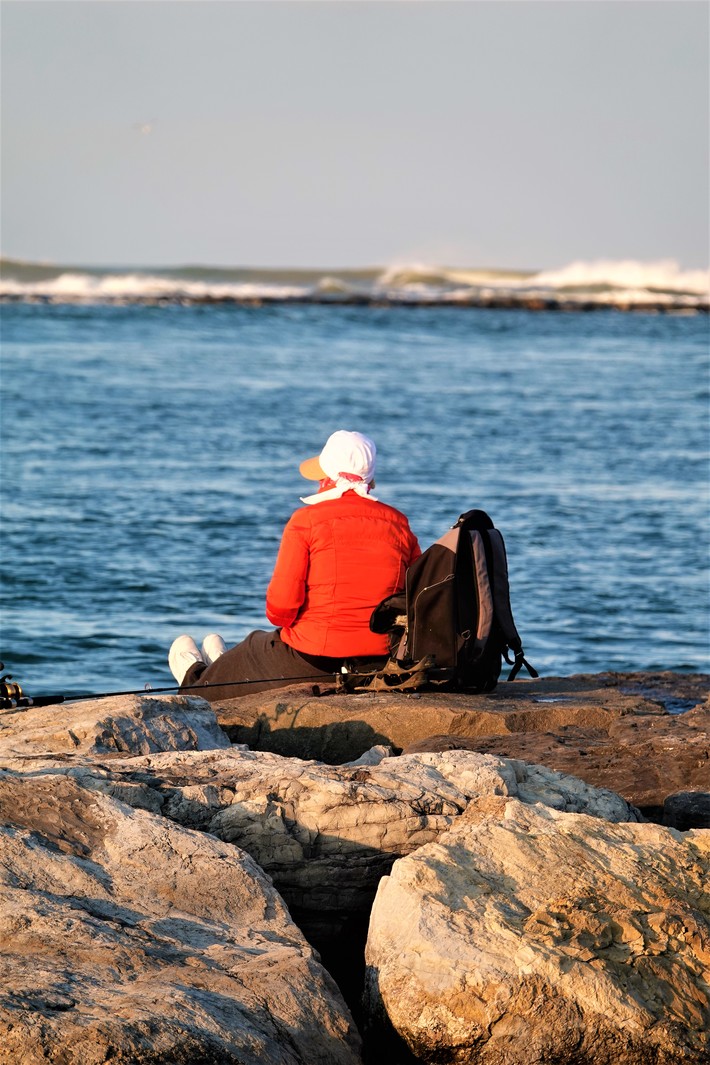 I gave it my best shot -- to keep beaches open, that is. But, science and sensibility fell prey to what amounts to shutdown hysteria. The near Island wide shutdown of “water activities” was admittedly fueled by some folks not displaying proper quarantining etiquette when beaching it.

I’ll stand firm – and defeated, momentarily – by persisting that there is absolutely no science proving any infectious/communicability danger from surf fishing and waveriding in Jersey waters. Please, do not try to roundaboutly usher in recent California findings of communicability in the Golden State. That data is strictly based on dangers within some of the West Coast’s pathogenically suspect ocean areas. It’s downright incomprehensible to overlook thousands upon thousands of people packing into supermarkets, big box marts and liquor stores while simultaneously insinuating a small cross section of people seeking healthy outside air -- by riding waves and pursing stripers -- present an unacceptable COVID risk?

I know I’m beating a dead beach here, but I simply want to go on the record as being among those disgusted with this beach ban syndrome. In the distant future, as generations look back and laugh their asses off at many of the current COVOD responses, someone will happen upon this column and note: “Well, at least not everyone was bamboozled.”

Taking a deep breath, these draconian beach actions will not last all that long, especially when public outrage goes off the charts, i.e. soon. For now, coastalites from as nearby as Stafford, Eagleswood, Little Egg Harbor, Barnegat and Tuckerton Borough, are out of luck when it comes to fishing, surfing or even walking LBI beaches. It’s so wrong. Just imagine those mainland towns fighting back by carding anyone entering their local stores, turning back anyone with LBI addresses. Hey, fair is fair.

Paul Haertel is with Douglas Itjen.

Outstanding togging today with fish to 9.5 lbs and a bonus cod for Douglas Itjen. #magictails #socialdistancing

Capt. Alex <lhsportfishing@comcast.net>
Thu 4/2/2020 9:18 AM
First, let me say I hope everyone is staying healthy and sanitized. In times like these, we often find comfort in things that are always there like friends and family. Some also find solace in the outdoors and reconnecting to important things from our past. Well, I did that just recently when I socially distanced myself from my friend Chris Lido on one of NJ's amazing trout conservation areas (kind of an oxymoron there).

Growing up trout fishing the NJ rivers often led to lost sleep from the excitement of hitting the stream in the morning. Chris, a professional fly-fishing guide, did a great job brushing off the dust on me. Dust that accumulated from literally decades. The end results were: I took away a book's worth of  knowledge: I can ride a bike after not being on it for years; and I caught, photographed, and released 9 rainbows. Some video from this adventure can be seen here Trout fishing, NJ

BTW: I have been going through old videos I have of fishing that I never edited and uploaded to my YouTube channel: Fishing Barnegat Bay  Since may have free time why not stop on by, subscribe to my channel and watch some of my videos. You never know, you may be in one of them!

Why hurricanes are so hard to predict 01:07

(CNN)Sixteen named storms, including eight hurricanes, are forecast for the 2020 Atlantic hurricane season, according to early predictions released Thursday by experts at Colorado State University.

Four of the hurricanes will become major storms of Category 3 to 5, with sustained winds of at least 111 mph, the projections indicate for the season that runs from June 1 to November 30.The chance that at least one major hurricane will make landfall in 2020 along the US coastline is 69%, compared with an average over the last century of 52%, researchers said. There is a 95% chance -- the average is 84% -- that at least one hurricane this year will make landfall in the US. 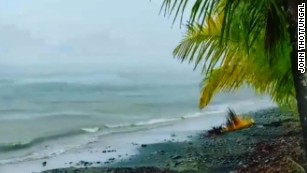 "The last season with four or more major hurricanes was the record damage-causing year of 2017 that saw Hurricanes Harvey, Irma and Maria," CNN meteorologist Brandon Miller said. "All caused significant damage in the US and Caribbean."
Six major hurricanes formed that year in the Atlantic basin. The seasonal average is 12 named storms, including six hurricanes.
The forecasts do not precisely predict where the storms might strike, and the probability of landfall for any single location is low.
"Coastal residents are reminded that it only takes one hurricane making landfall to make it an active season for them," researchers Philip Klotzbach, Michael M. Bell and Jhordanne Jones wrote in the report.

Confident in their forecast

The above-normal activity was predicted consistently across types of forecasts, Klotzbach said.
"This year, we used four different techniques to develop our forecast," he told CNN Weather. "And they all point towards an active season."
Colorado State in its April predictions hasn't forecast four major hurricanes for a season since 2013 -- a year that didn't quite perform as the early forecast expected.
"I'd say that this year, we're pretty confident," Klotzbach said, citing a lack of El Niño conditions that can mess with expectations.
When El Niño is present, it reduces Atlantic hurricane activity due to increased vertical wind shear -- changes in wind speed and direction with height that prevent hurricanes from building.
Average conditions create a more favorable environment for tropical storm development.

"Also, the tropical Atlantic is quite a bit warmer than it has been the past few years at this time," Klotzbach said.
Sea surface temperatures are one of the ingredients needed to fuel hurricanes. The warmer the ocean, the more fuel available for the storms to tap into.
Although four major hurricanes are forecast this season, that doesn't mean any necessarily will hit the US coast.
"Two of the last three years have had major hurricane landfalls in the US (2017 and 2018)," Miller said. "Before that, there was a 12-year drought without a single major hurricane landfall anywhere in the country (from Hurricane Wilma in 2005 to Hurricane Harvey in 2017)."
"The last major hurricane to strike the US was Hurricane Michael in 2018," he said.

Forecasting this far in advance can be accurate

The models are based on 40 years of data and conditions, including sea surface temperatures, sea level pressures, vertical wind shear levels and El Niño.
April is about the earliest experts can get a good indication of what conditions will be like during the hurricane season. 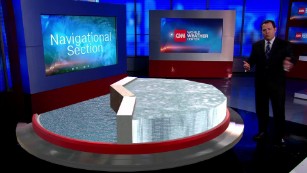 What is a 'hurricane wall'?
"We find that there is just too much uncertainty with the future state of both (El Niño) and the Atlantic prior to that time," Klotzbach says.
Still, these statistical and dynamical models fail in some years, the researchers made clear.
"Last year, we forecast a near-average hurricane season and ended up a bit more active than we thought," Klotzbach said.
Their April 2019 forecast predicted five hurricanes for that year; six were observed. They forecast two of those to be major hurricanes; three were observed.
Their April forecast did vary significantly from the total number of named storms in 2019: 13 were predicted, while 18 formed, though many were short-lived and weak.
This marks the 37th year that the university's team has issued an Atlantic seasonal hurricane forecast. The official forecast from the National Oceanic and Atmospheric Administration will release in May.
The hurricane research team from Colorado State will also release updated forecasts on June 4, July 7 and August 6.

Hoping everyone is doing well and getting their tackle in order.
Giveaway week #3 is a Guppy 2-3/8 oz. Mini flat in the "Show Special" Baby striper pattern and a Guppy tee shirt. Ends at midnight Friday April 3
Good Luck