Doug's big kayak bass -- Story below June 10, 2008: Waves: Small. Water temps: Working upward as expected, low 60s and maybe warmer on your street end. Winds: Coming around to the west by Wednesday. Heat backs off – for now. Since beginning my websites in 2000, or thereabouts, I’ve gotten great reports – far above those of your average website. But in just the last few days I have gotten easily the finest and funnest e-reports of all time. A huge thanks to one and all and I will be incorporating them (i.e. publishing them) in here over the next few days. I’m getting more data about the 48-inch, 45-pound bass caught in a canoe off Brant Beach, taken snag-and-drop. That was a two-man effort, though only one fought the fish. Fun stuff. Photo on http://jaymanntoday.ning.com/. 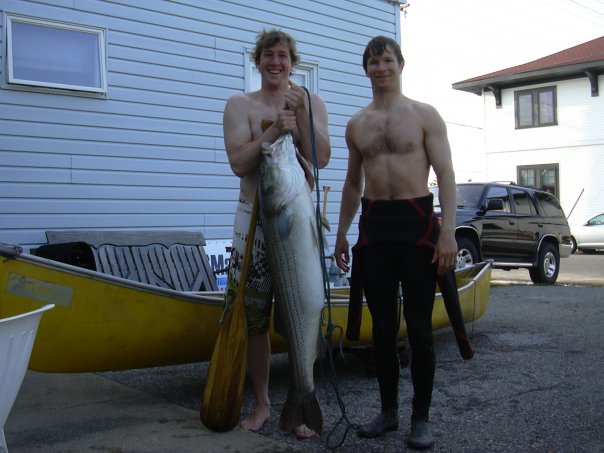 Staying big time, a hyper congrats to Mike A. for busting the 50-pound striper barrier. Here’s his mail (photo to follow on my site): “Jay, The story goes….TOO LATE for the High Point Volunteer Fire Company Striper Shootout! (I am a member of HPVFC). The fish was caught on John Tilton’s boat the MISS OLIVIA using live bunker just off the beach in North Beach. The fish was weighed and measured at Barnegat Light Bait and Tackle by Nick @ 50 pounds 4 ounces, 51 and 1/2 inches in length and 27 and ½ inches in girth. Please include the info on John and his boat as I was a guest and the Fire Company also please. Mike Appleby, Harvey Cedars.” Now to one of those e-reports that makes it fun to be in this business. By the by, I’m a professional writer, not a fisherman. A lot of folks don’t get that subtle distinction when I write about things that many snootier type anglers find improper, like exact details on what’s hot – or frigid -- in the fishing world; or, where the action is taking place. I bring that up since so any of the regulars in this website run with my way of offering more details than the more famed chatrooms). Hey Jay; This is Doug the guy that got your 'grandfathers help in TRACKing down your truck part at Holgate' story. Also the guy fishing with Alan on 27th st SB a couple years back when he released that 50lber. Thought I’d send you a picture and a story. I left my home in Mt. Laurel last Friday to arrive at my home in Ship Bottom with a ride on kayak. Before I left I had been in touch 3 different dealers and ended up buying one right down the road at Island Surf and Sail. I'm a big stream kayak-er and kayak year round but it wasn't until Memorial Day weekend that I got out on my "captains" (friend Ed with boat and the expense) kayak that he just bought used though the paper. He never kayaked and the thought of 55* water cause a little thought but we both got out and loved it. I ended up doing two trips to SC from his place in BB and back. So come Saturday Morning we were both ready to launch from BB. I'd like to say it went off without a hitch, but the learning cost me a phone a pole and some dignity if I had any. We both got out past the outside breakers and were out with all the numerous boat that were out there chasing the bunker. We had rigged up for flounder and fished our way up the island to SB. No luck but he got a nice short ride from a sand shark. We repeated this trip a couple times on Saturday. The learning about how to get back in without burying the nose was a test to see if we really liked this stuff. We both took our turn in the drink and got out and went back for more. Sunday morning found us with much more knowledge, a lot less wind and a lot more boats. On the second trip I just wanted to catch some fish from it for fun so I started chasing the pods of bunker and snagging them and releasing them. With all the boat I didn't see anyone catch any fish with a bunker. I was now about 3 blocks from Ed and decided to start working my way back to him. I snag one more bunker and decide I would drag it back with my borrowed pole in the back holder with the drag set real light. After paddling about 5 minutes I heard this faint noise " oh sh** it's the drag" I managed to get the rod out of the holder but the line was singing out the back of the kayak. Using the pole, position, fish pull and drag I got the kayak turned around and off I went to the south and out. By now all the boats were behind me so it was just me, a fish on the line and Hemingway. After about 25 minutes I was gaining on the fish and out of the depths to my right I saw it. The exact phase I'm not sure but it was audible. It then went down again and away we went again. I wasn't in any hurry to get this fish in because it was a small pole for this size fish and there was no way I was going to try getting this fish onto this kayak this far out and in this cold water until it was well worn out. When the time came I pulled it out of the water and in between my legs with it big mouth opening and closing causing me to give thanks "no teeth". When she would bang her tail it did cause me to bear hug her with my legs as I worked my way back to Ed; now over a mile away. As I approached him I shouted out " we weren't fishing together, right?" We've been fishing together for about 6 years and 3 boats. Big, medium and now kayaks. Although we're great fishing buds we both joke about how before we started fishing together we each use to be a lot luckier on the catching part. His wife Carol just laughs when we tell her we'll bring back dinner. When he saw the fish he instantly caught up with me on the excitement. We work our way through the outer breakers and beached as if we knew what we were doing. Great fun adventure Thank you God you're doing good for me. Doug **********************