Thursday, May 24, 2018: High Bass Alert! For months, it was tough to find a mentionable bass, now all bass hell has broken loose

Watch out for assorted bathers this weekend ... 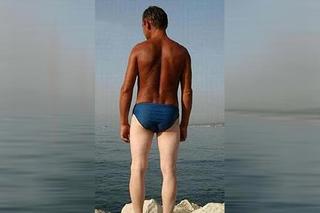 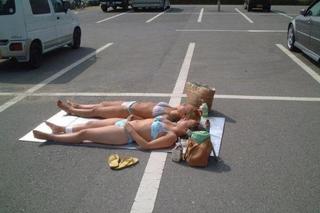 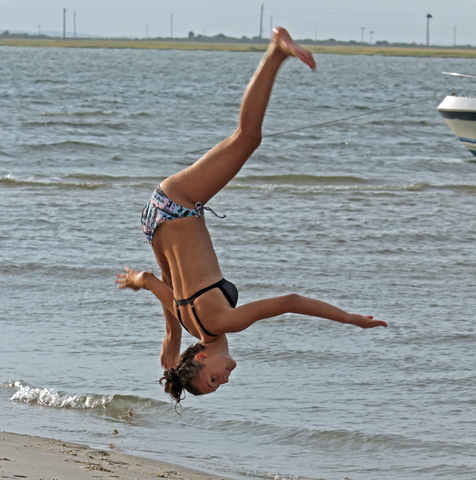 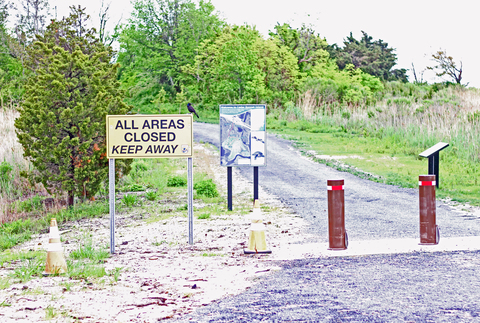 Thursday, May 24, 2018: High Bass Alert! For months, it was tough to find a mentionable bass, now all bass hell has broken loose … which is wonderful thing. It’s made more so by the fact major stripers are being caught by both boat and bank/surf. I’ll venture to say we haven’t seen surfside cows like this in maybe five or more years. Along with those fish seen in weigh-in shots from assorted bait and tackle shops, I saw an insane 57-pounder caught in the suds.

The boat action is in close … and occasionally frantic, often tapped into with jigs, though I hear of many an umbrella troll. I haven’t heard as much about snag-and-drop so if you’ve gone that route, please let me know … Obviously, no sites burned, even water-top sites.

The ocean, surfside, is just about as close to ideal as it gets this time of year. Here’s a video look:

Water is low 60s. There’s enough light onshore breeze to chop things up, lest it get too calm and clean, though it is a nice blue/green-clean tint. Jigs and plugs are both nabbing schoolies and just-keepers. Bunker and/or clam meat are what is enticing serious-grade stripers. Even heard tell of rod/reel near pull-in from a 30-pound-something bass; equipment saved from total submersion by a passer-by. Great day to hold rods instead of spiking.

Cocktail/tailor/eater bluefish are in the bay, inlets and less frequently in the surf. Late-day surface plugging works best in the bay, though any time that birds are picking away – seldom frantically – there could be those fine-sized bluefish in-play just below.

I know I constantly repeat this but some of the most fun popping-plug action out there comes when bayside blues are slim and hungry, i.e. now. Obviously, the more battered/sacrificial the lure/popper, the better … and cheaper. It sure seems that plugs with noisy metal beads inside work better when bay waters are quiet. For faster unhooking, it helps to reduce from treble to single. No need to have bucktails, flashabou and the likes. It’s also a fine time to get rid of any raunchy plastic tails residing in the bottom of the tacklebox, coupling them with battered jigheads and a short length of steel leader.

Going purely on posted photos, black seabassing is hot, with larger fish returning, after a couple years of downsized models. The bigger the black seabass the larger that back hump. By the by, I used to keep seabass in an aquarium and their ability to make their eyes a glowing red is something right out of a horror movie. Despite reading up on the phenomenon, I’ve yet to see an adequate theory on why they do this eye-color change.

Not that I’m big on reporting about summer flatties – which needs no hype of fanfare --  the current early-season showing of these $8-a-pound meat fish seems astounding – for opening day. I’m betting it’ll be one of those nonstop fluke-hooking summers, during which it comes down to sorting out keepers – or, better yet, culling out smaller keeper fluke from the live well.

Broken record: The future of fluking lies in how gently throwbacks are dehooked and released. Just because a throwback swims off in a flash doesn’t mean it’s going to survive – only extra care when handling flatties assures that.

Standup paddleboarders in the surf have begun seeing a few small sharks.  These are not dogfish, as indicated by their swimming further up the water column; dogfish being bottom dwellers. How can we not be seeing another high-viz shark year, after another year of utmost regulatory protection has many types of shark bouncing back like mad. Shark threat to bathers remains totally negligible.

As to nearshore sharks being by-caught by surfcasters – “by-caught” since it’s illegal to target them directly – it will surely be a banner year. Unless you have a trained eye for shark species, it’s best to throw them all back – quickly and mildly. Note: Many common and highly protected sharks have very long tail fins. They’re frequently confused with keepable threshers – which have insanely long tails.

Below: Brown shark; On the Water ... https://www.onthewater.com 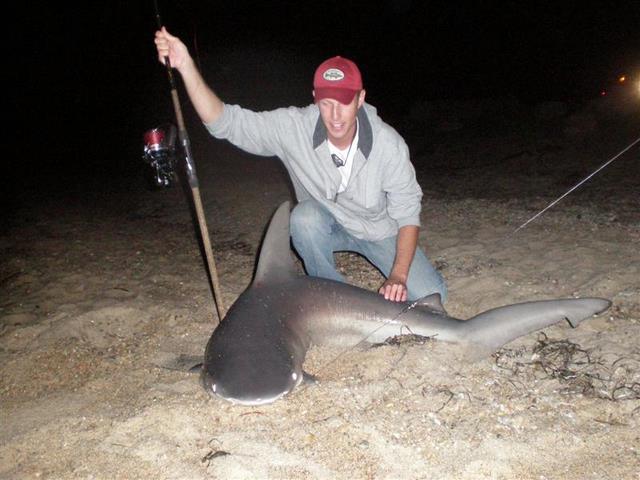 The long awaited Memorial Day weekend is arriving in Beach Haven, and the captains of the Beach Haven Charter fishing Association are welcoming it with open arms. After a spring featuring unseasonable weather, spring weather is starting to take hold. As the air temperatures warm, the water temperatures also rise, and the fish are getting active.

The big news is the opening of the New Jersey summer flounder season on Friday, May 25. Early fluke action is usually centered in the inshore waters, and early indications point to that situation this year. Anglers after other species have caught an unusually high number of big fluke meaning the season should start off with a bang.

The black sea bass season has been in full swing for a couple of weeks now, and the inshore reefs and wrecks have been giving up decent catches of sea bass along with some cod and hake.

Small striped bass have been around for a few weeks, but larger fish started arriving in the last week. Boats trolling spoons and Mojo’s have been catching fish along with some reports of drop and snag action on bunker pods. Big bluefish have been making their presence known along the beach, in the inlets, and even in the bay waters. Some of these big choppers are weighing in at over 10-pounds.

The current fishing action in Beach Haven promises variety along with good action. The captains of the BHCFA are poised and ready to take advantage of the fishing.

The association has announced that it is dropping its minimum age from 13 to 12 for youngsters in the popular Junior Mates Training Program. Complete information on the Junior Mates along with the BHCFA can be found at www.BHCFA.net

Kyle Heyman is with Dante Soriente and 2 others.

Well tonight is a night i wont soon forget absolute slob on a magictail mojo with my good friend capt george cox and to top it off i got to share it with my son on his first bass trip gotta thanks jen too after the day she had ,she knew how important it was for me to get my little man on some fish

Wow, this is what Surf Fishing can produce. 57lbs

Big Weigh In off the surf!

Fishing is pritty good from the beach and boat! Anglers fishing the local waters are finding some nice fish. Here’s Marie with a quality striped bass on the beach.

Short outback session. Usual suspects, but always fun to see: Even the most harmless snakes can put on a pretty bad-ass glare; many a gorgeous six-spotted tiger beetle (Cicindela sexguttata); quiet butterfly beauty ... before the more colorful ones start flitting their stuff (this one could be anything from a skipper to a satyr; lepidopterology isn't my thing; too many lookalikes.

Forgot to give this kindly little worm snake its 5-seconds of fame ...