Monday, September 26, 2016: I’ve been having my usual lousy luck fishing LBI lately. And I’ve even been putting in a solid three or four minutes per fishing spot. During those exhaustingly long sessi… 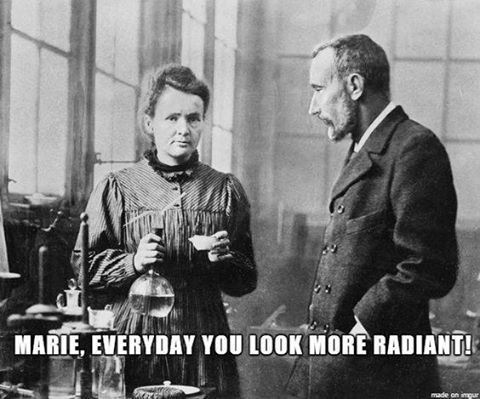 Monday, September 26, 2016: I’ve been having my usual lousy luck fishing LBI lately. And I’ve even been putting in a solid three or four minutes per fishing spot. During those exhaustingly long sessions, I’ve thought about starting up an Attention Deficit Hyperactivity Disorder Anglers Club. We’d meet very frequently … but for no longer than it takes to sign in, sip a Monster Drink and hear someone yell that there’s an even better meeting just down the road … and we’d all be knocking each other over to get to our buggies. Our annual ADHD Surf Fishing Contest would run from 8 a.m. to 8:15 a.m. Late signups encouraged. First prize would be a family of ferrets.

For slower types, please get crackin’. It’s a perfect time to sign up for the 2016 Long Beach Island Surf Fishing Classic. The forms are in participating shops and I just have this feeling it might be your year – or even my 15 minutes of re-fame. Hey, I won one year … I was young and needed the money. Since then, I’ve nobly allowed others to take all the prizes. I always like to point out that this famed contest is not all about the biggest fish in the ocean. It’s about the biggest bass and blues on a given day. Think about this: There are days when loads of prizes and prize money aren’t won. All you would have needed on those days was what might be called a minimal entry ... to be prized under. If that doesn’t prove a level playing field for anyone who enters nothing does.

I’ll add another factor that has proven out over the years: the majority of winners are walk-ons. You absolutely don’t need a 4WD vehicle to win big in the Classic. As to needing help hand-dragging a 50-pound bass off the beach, now there’s a problem we’d all love to have once in our fishing lives.

Holgate is buggy-negotiable at low tide but with a growing headache area. What I call the Dead Forest zone, about two-thirds of the way to the end, has been exposed in such a way that even at low tide branches and s*** are across the wet sand.  You need to drive high (so to speak) to get through. Even then, there is some tricky maneuvering to keep tire-damaging ex-vegetation from going under-tread.

High tide presents a slew of quick-sink problems. For any buggying newbies, please recognize that water-fluffed sand -- from waves steadily washing up and over  -- can go from solid at low tide to total quicksand with rising tides. If you bog down trying to zip over sudsy wet sand, there's no rescue, even from tow companies. You just wait in dismal sinkingness until the tide drops and you see what remains of a $40,000 vehicle. Believe me, we've seen it happen. And it does make a cool photo-shoot for the likes of, well, your truly. 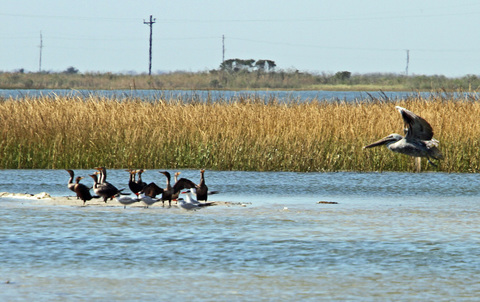 ISLAND BEACH NANNY-NANNY BOO-BOO: Per usual, i.e. so what else is new, friendly rub-it-in folks up Island Beach State Park way have been reading my recent blog reports that we’re catching mainly way-small stripers here on LBI. In snickering response, they just had to point out they have plenty of keeper bass activating the park’s suds.

I’m sure not going to bust on my beloved Island but it’s always been a mystery to me how we usually can’t hold a candle to their seemingly never-ending action. As the gulls and gills fly, it’s not more than a couple hundred yards of Barnegat Inlet separation between there and here. It might just as well be an electrified fence.

Oh, I’m not overly bitchin’ here, but, since I’ve expanded the coverage area of my “Jay Mann Today” daily blog (www.jaymanntoday.ning.com), I’m getting a feel for just how much of a here/there disparity there can be. In the oddest of ways, I even sometimes relate the lands north of Barnegat Inlet as being part of the famed New England bite.

As to a real reason why IBSP often out fishes us like we’re standing still, I was once shown some nearshore and just offshore ocean bottom contours. Sure enough, there are what might be called fish-friendly deeper-water conduits -- a little more vague than actual underwater channels -- that could act to safely funnel in gamefish. Then there’s the meal ticket from copious IBSP forage fish, bred within the likes of Raritan Bay – and even Barnegat Bay.

Look closely at this aerial shot at the Gov's mansion and you can just see those "conduits" ... 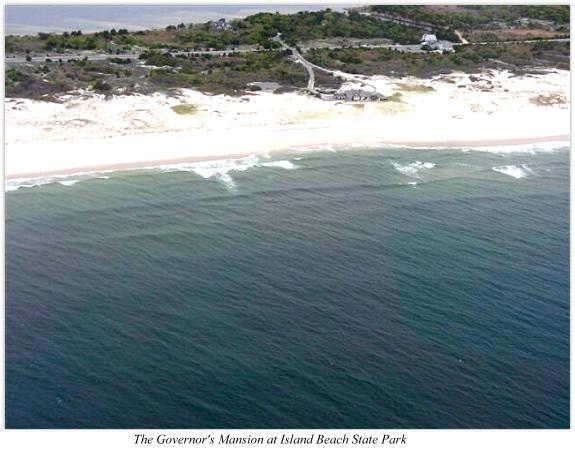 And the corresponding beach "cuts" ... 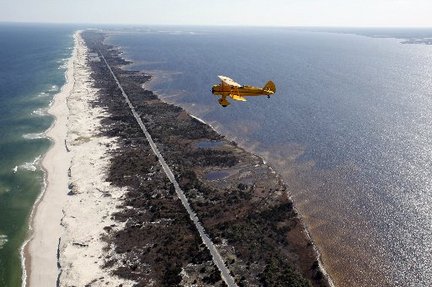 Aren’t the same bottom formations off LBI? Yes … and also not so much. The water is shallower and the bottom less contoured – not to mention constantly shifting. What’s more, the availability of forage just doesn’t seem to be as great a gamefish draw off LBI as it is in just-north waters.

There ya go. Now, if the Island Beach Chamber of Commerce could just make that check out to "Turncoat Jay Mann."

I was among the many horrified at the sudden death of young Miami Marlins ace pitcher Jose Fernandez. Like many sports fans, I got close up and personal with Jose while tracing his life and time via ESPN/MLB TV specials on his life in Cuba -- and his tireless efforts to escape. He was one upstanding young man our nation was proud to have on-board.

As to his instantaneous demise, along with two others, I wasn't as shocked as many folks, having seen boating-related injuries and fatalities just about my entire coastal life. I wasn't a bit shocked when one big-network announcer as much as asked, "How can anyone die in a boating accident?" I think he covered one too many sculling events, though even at rowing speeds there have been critical injuries.

Seeing the Newsday photo of the accident (below), there's not a boater who doesn't see there could be virtually no survivors, especially when adding in what might have been 40-knot speeds. 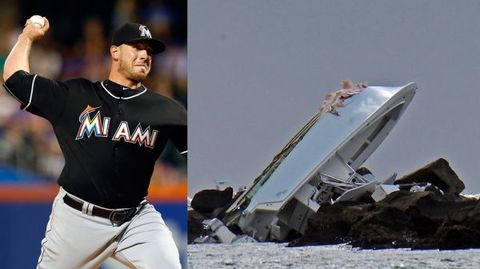 I've been a darter fisherman since the first 3 oz tattoo I stuck on my line the first year I started surf casting. I fell in love with this Lure as it seemed in the shallow waters of South Jersey that I finish a darter would get more strikes on larger fish than anything else I threw in my bag. The last for five seasons I've traveled north a good amount. Darters would catch me s ton of fish but struggled to get away from the smaller fish. I started throwing more loaded needles than anything. Last Asbury show i met Walter Siggins and he gave me a bone darter and said make me famous. I laughed and said all I can promise is to fish it. I had a rough spring traveling with not many big fish to speak of however I was able to test five or six different darters from him. We made a few adjustments but I firmly believe it is now perfect for the type of fish and that we do. His paint schemes have always been beautiful but that's not what matters when your fisherman. The profile of his darter is like no other and action fish can't resist!! Above his two daughters both 8 inches weighing 3.75 and 4.25 ounces that myself and Buddy will be fishing this fall. If this catchy nothing like his small one were all in for a treat!! If he's selling any of his new Darters make sure to grab a few!! 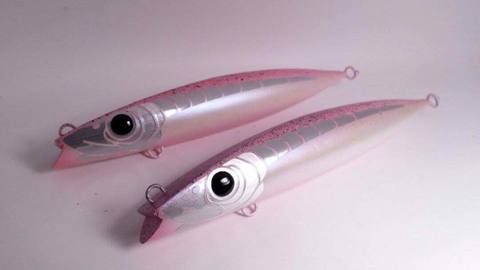 9/26/16 UPDATED 4:59 AM No wind and starry skies this morning. There's a lot of bass being reported and posted the past few days. Could there really be that many fish coming out of the bays and river, or are we already seeing the tip of the Fall run? Why question it right? I would like to think that this is going to be a perfect Fall where we have a ton of blues and bait keeping us busy until the bulk of the bass show up. These bass I'm seeing are not 18 inchers either. We're talking some nice 30" fish. Conditions are perfect today. I'll do a video when the sun starts to come up. 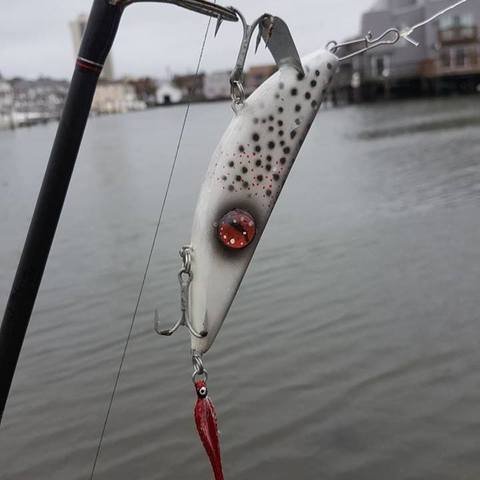 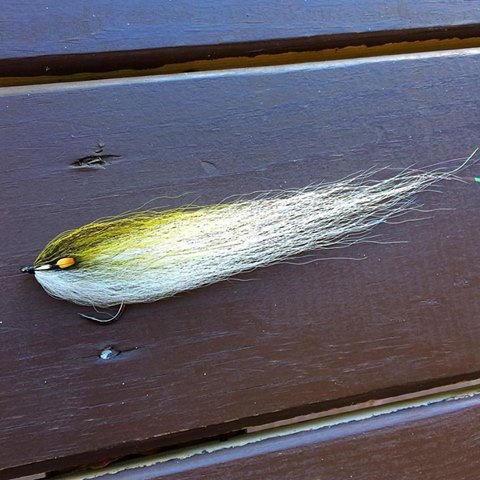 Hit the beach with Dad for a quick hour of fishing. Got two nice fat fish at 29" and 30". They were fat! The 29" fish weighed in at 12lbs on the Boga. All on plugs. First bass on the new 8' St. Croix Mojo! Both fish were released. Awesome night! Hopefully this sets the tone for the Fall run!!
JF Mitchell 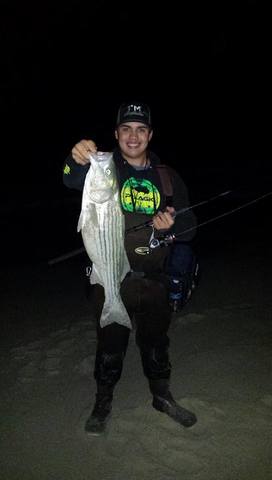 
Slack tide check in: they're not as big as last week, but they're still a lot of fun. Whether you're an avid angler, a weekend fishing enthusiast, or just have an interest in fishing, the Fisherman Magazineis just like you and their goal is to provide you with the best fishing information available anywhere. The Fisherman Magazine, the ultimate fishing authority in the Northeast and Mid-Atlantic regions for inshore, offshore, surf, freshwater and fly fishing. With three regional editions (New England, Long Island, Metro New York, New Jersey & Delaware Bay) they publish 12 monthly, full featured, visually stunning print publications per year. Thier unique editorial blend of the people, places, images, techniques, events, news, gear and of course the incredible game fish of the Northeast/Mid-Atlantic regions, provide readers with an enormous amount of relevant content. Much of their print magazine content is also linked to additional companion content online.

As a series sponsor, the Fisherman Magazine has sent us the most up to date complimentary copies to be put into our captain bags that are at ever tournament this year with ASAC. These bags are available on a first come first serve basis and are limited. If you cannot make it to the tournaments below, purchase the Fisherman Magazine at your favorite Tackle Shop or contact them to subscribe at www.thefisherman.com