Saturday, July 23, 2016: You heard it here first but I sure as hell don’t want to get blamed for it. Upwelling has crapped up our nearshore ocean. Hey, I prolifically praise beautiful water for all i…

Saturday, July 23, 2016: You heard it here first but I sure as hell don’t want to get blamed for it. Upwelling has crapped up our nearshore ocean. Hey, I prolifically praise beautiful water for all its worth. When it goes south – crapped up by dirt and icy water – I get to call it crapped up.

Yes, the weather service is calling the water 69. If you believe that …

The west winds have made a good run of it, hanging around deeply into the day (before going south), heating the air into the low 90s. The sand temps where I visited in Loveladies was taking no prisoners. There was pure pain on the faces of many folks running off the beach. It didn’t matter if you were wearing flip-flops or even those things called beach socks, by exit’s end people were praying for even a sliver of shade upon which to rest.

I’d like to personally thank the clouds that leaked in, mid-afternoon.

Loveladies meets replenishment. Why am I smiling? Might that umbrella set-up on the dunes be a protest? Hey, I don't give a ratfish's patoot. I know what the beaches and dunes are going to look like in the end. 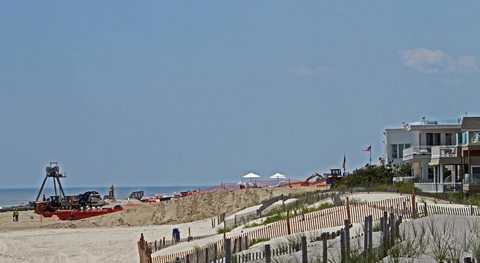 MORE SHARK TALK (Hey, I like sharks, what can I say?):
The number of daytime sharks being caught has gotten remarkable. Recognizing they are fish, we can apply some simply fish-count logic to all those hookups. For every one being caught, how many are out there not being caught? OK, so they aren’t as jam-packed as, say, marauding bluefish hordes. Nonetheless, there simply has to be a slew and a half of them out there. So many, diurnal eating seems to be a must.

While sharks are always on the move, day and night, they are decidedly more active and aggressive at night, especially in temperate climes. There have been massive numbers of shark studies done, many of them by folks who live and breathe the animals. Still, the intricacies of shark behavior remain mysterious to the max.

Thinking locally, the come-lately bunker/menhaden has to be feeding the shark resurgence, albeit mainly for faster sharks. A slightly slower go comes via what many researchers have described as an irruption (biomass burst) in stingrays, many a shark’s all-time favorite. With so much fine forage afoot, we have the makings of a shark boom unseen in many a “Jaws” moon. And, yes, it’s “we.” Our remarkable US shark conservation is surely behind the surge in gay suits.

Below: Another ray bites the dust, this one falling to a species, hammerhead, I was charged by off Sand Island, Oahu. Bug-eyed bastards can't be trusted. Not common in our parts, though I've come across small ones in NJ. I’m still being stumped by winds and highly uncooperative, upwell-dirtied near-in waters. Having been an underwaterist for decades, I guarantee there is something of a shark show down there. I just need clean to somewhat-clean water to catch a peak of the pack. I’m not talking one of those spawning frenzies where sharks are fin-to-fin. We likely have a presence that can be seen during a snorkel session swim or possibly during a paddle-about.

I have to think that paddlboarders donning glare-cutting sunglasses can get a decent shark show, providing they know what to look for. Sharks don’t jump out at you -- visually speaking. If your eye isn’t totally tuned to search through the water column – the way we look down when throwing net on mullet -- even a 10-foot shark can glide by unseen. Look at all the photos of landed sharks, how light-colored they are … even brown sharks. In the water, they’re good as ghosts.

Below: Here's a jumbo shark, just landed by the Apex boys. Note the skin color in relationship with the sand. Looking down through the water column, even this big of a gray suit can seemingly go missing. Photo: www.onthewater.com 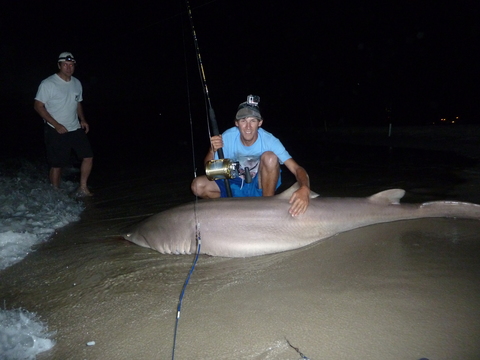 This is for you son I redeem myself what a fight landed all by myself ,yes sir ,what a year baby Living the dream ... This is how I roll 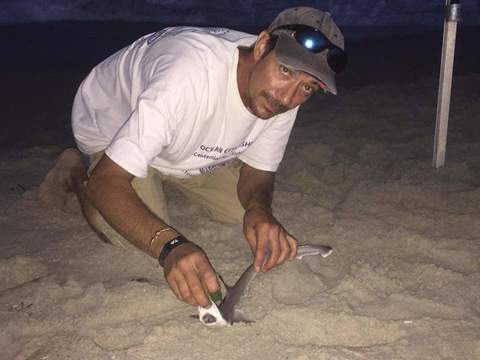