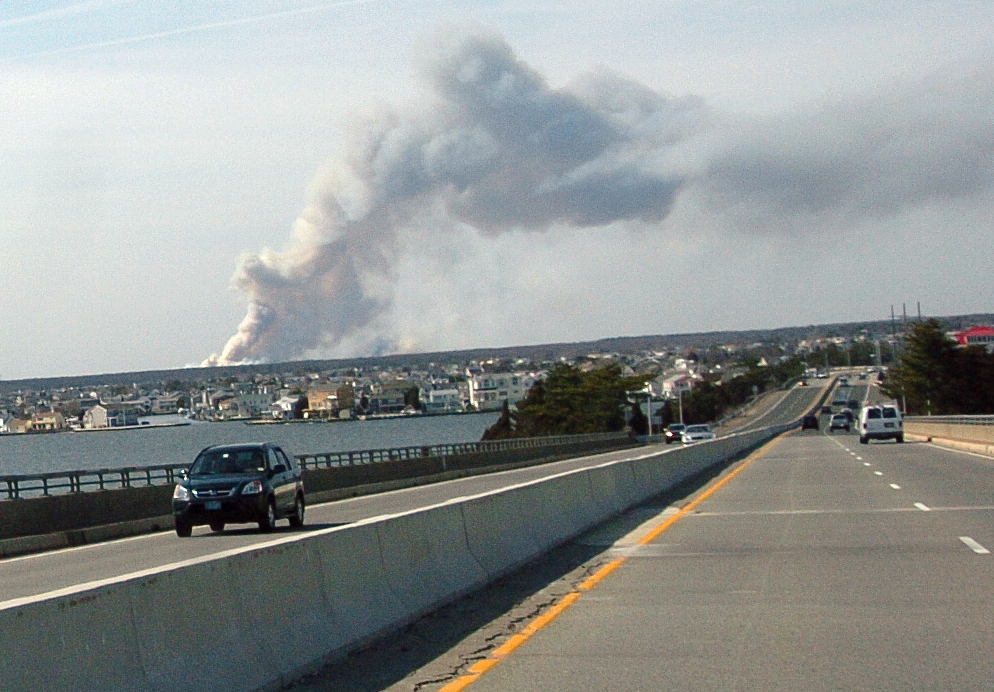 Contorl burns on the mainland -- Any guesses on how long they stay controlled with 45 mph winds? Thursday, March 20, 2008: A few folks are going down to Graveling Point to try their hand at bassing with bait. Zero action, I’m told. Some guys are then making the drive further up river. The landings and Banks have loads of folks working the bridges. The most I heard was a few perch and some freshwater species. I’m going to do a stop at one of the Landings tomorrow. I had an interesting response to my write-up on the seeming disappearance of river herring. After blaming the commercial fishermen for taking river herring – hauled in during massive removals of ocean herring and mackerel – he said there are some signs that a decent run of herring is currently working its way into the Delaware Bay. How many make it through is the big question. A bigger question is whether or not the Boston macks will finally return this year. Fresh macks are one of the finest tasting fresh fish out there. Plus, the health benefits of eating them are through the ceiling. Down side is the same reason they are so good for you. The heavy oil presence in mackerel means they go rancid far faster than other fish species. The oils also make them less the great for freezing. Thawing causes the flesh to become soft. Did you know that in coming spring months, mullet and bunker larvae will get whisked into the bay from the ocean, determining what sort of fall run we’ll be having. The phytoplankton levels in the coastal waters off New Jersey remains excellent. That is huge when it comes to nurturing survival levels for the larvae. A couple surfcasters working LBI have – with mock enthusiasm – announced the arrival of the skate. I find it hard to even joke about that with the price of bloodworms up to $12.00 a dozen. I’ll be digging my own, at least for flounder fishing. The entrance and beachfront of Holgate continues to be a lost cause. The south winds are the culprit and show no indications of slowing down. This could be a spring totally dominated by south wind patterns since systems are already lining up that way. News Story: March 20, 2008 - Year-to-year fluctuations in fish survival rates are more pronounced as populations decline, a Dalhousie University study has found, adding another layer of uncertainty to the effort to manage depleted stocks. Tracking fish populations and making accurate predictions on future populations is notoriously difficult because of the amount of year-to-year variation in the survival rates of fish in the early stages of development, according to lead researcher Coilin Minto of Dalhousie's department of biology. But while most predictive models assume this variability, or 'noise,' is constant, Minto's study, to be published in the journal Nature, found it was inversely related to population. The change in survival rates of a given fish population fluctuated more widely and became less predictable as the size of the population decreased. 'This has implications for fisheries management,' said Minto, who worked on the study with Dalhousie statistician Wade Blanchard and the late Ransom Myers, the biologist whose research brought worldwide attention to the issue of overfishing. 'If variation increases as populations decline, there is an increased potential for incorrect recovery projections and also an [increased] risk of extinction for extremely low populations,' he told CBC News.Research could improve fish stock estimates. The study looked at data from 147 fish populations accounting for 39 species, focusing on recruitment rates - the chance that juvenile fish would make it to the early stage of adulthood.