Thursday, November 26, 2015: Remember that half of Thanksgiving is “giving.” It’s one of those days when giving comes with calmness and civility. You know as well as me that many Thanksgiving gatheri…

Thursday, November 26, 2015: Remember that half of Thanksgiving is “giving.” It’s one of those days when giving comes with calmness and civility. You know as well as me that many Thanksgiving gatherings often entail mixing it up with the best and worst of family and extended family. 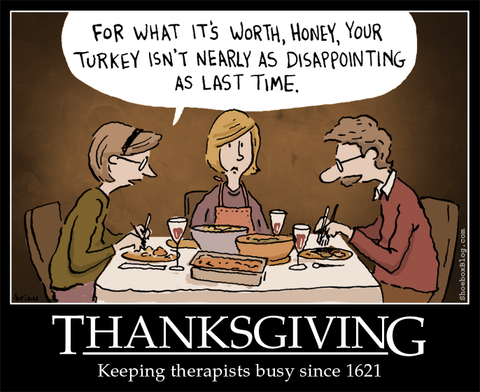 No better time to bury the hatchet, as the surprised-to-be-invited Indians used to say about making peace – even if it’s only with a stump. Go with the flow, enjoy the televised games and be part and parcel to the “thanks” part of things. 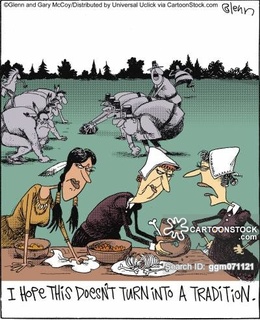 I case you’re wondering why I got into that little speech, I was just reading that Thanksgiving, of all days, often leads to police and ambulance calls for “domestic disturbances.” I’m guessing those come after the drinking begins but before the meals, since being stuffed is actually a great calmative – above and beyond the so-called turkey dinner affect from the tryptophan in the gobbler.

Getting to fishing, I was writing about boats having to be tied just right for the west winds and blowout tides. I actually got an email suggesting boats are already out of the water and shrink-wrapped. Well, one need only look seaward off areas of LBI to see there is still a S-load of vessels in-water – and out fishing, mainly off Ship Bottom and northward. Waters off IBSP have some zoo gatherings. The bass bite for boaters obviously continues. I heard a couple LBI boat anglers talking about having one of their best bassing days ever.  There is a decided downturn toward smaller stripers. One gal had to wade through “over a dozen” sub-keepers to land her Thanksgiving bass. While, over at another bass biomass, 40-pounders were being taken. A buddy suggests the smaller bass are in what might be thought of as a lead pack of feeders, and that larger cows trail behind – sometimes far behind. That is somewhat consistent with the way it went when we used to get beachfront bass blitzes.

Here's a vid of the LBI near-beach boat action this a.m.: http://www.youtube.com/watch?v=wZq41S5vfgk&feature=youtu.be 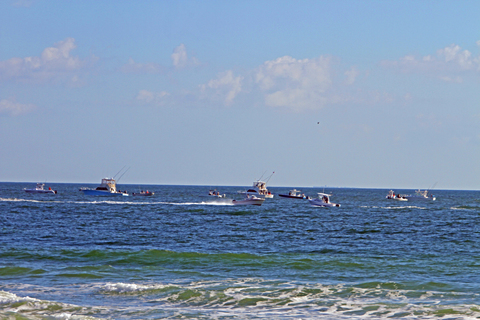 Not that I’m out there to confirm but white colored jigs and such seem to be hot. You’ve likely seen the huge skirted heads now being used. Must offer a squid-like look – though feeding bass sometimes seem to go after anything they can warp their mouths round, even before ID’ing the item. Below: Daniel DiPasquale with Dante Soriente lure. Got our Thanksgiving bass! Stripers. Food. Family. Football. This truly is my favorite holiday. Happy Thanksgiving everyone!

There is still a striper spattering in the suds. Below: I drove by Kirby shortly after this beach catch. The gang also took some other smaller fish. Here's his write-up. Good info.

For my Surfcasting friends......Here is the story. Tom Gordon and I saw the blow out tide during low, did not realize how deep the hole was in front of us. We estimated during in coming tide, it was ~ 6 feet deep and high tide ~12 ft deep. We set back up in front of the hole three hours into the rising tide, 10-0 circle hooks and bunker chunks, even experimented with a new way of cutting the bait, just back fin meat. Look behind us and you will see the deep water to the left, it is where the waves are not rolling. Waves break on bars, waves disappear in deep water holes...So sitting there and we all see the rod bend violently in half, and I took a header running to grab the rod before it launched from my sand spike. No need to set the hook when using circles, the fish was on and started pealing line. She ran out past the breakers and then I tightened the drag once she stopped. Battle begins, she broke water around 100 yards out past the outer breakers, rolling, spinning and tail slapping the water and then the strong sequential tugs to try and throw my hook. She started swimming south across three other lines so I held her steady and walked north on the beach to guide her back away from the other lines. Now the fun begins, walked backwards up the beach without reeling, then reeled as I walked back down to the waters edge, while keeping tension on line. Stopped reeling when she pulled or you can snap line. She broke water 4-5 times on the way in and then once she hit the deep water at edge of beach she started rolling trying to break the line. Need to hold the rod and reel steady when this happens, never fight the fish, wait until she pauses to do your reeling, then when she is 6 yards from the waters edge, just walk backwards and time your pull with an incoming wave, (the wave will help to push her onto the beach) many stripers are lost in the last few feet of the beach. Can't wait to get back down there

Post: Epic Day today....Pierce caught his first striper and both boys caught plenty of skates. The day ended with a fierce fight, 37 inch, 19 plus lbs. Striper for Christmas Eve, no Ipollito's this year. Me and the boys are going to remember this one for a long time. Tom Gordon, Tim Rothrock

Odd e-report from Allen L. L.: "Caught and released a keeper fluke off surf yesterday evening on a SP Minnow." With surf temps still well into the 50s, there are likely more flatties out there. Regs should allow the keeping of any fluke caught in the surf after Nov. 1. I often publish amazing photos by

who I consider the planet's premier fish photographer. Well, if you think his shots come easy, here he is getting ready for a shoot ... 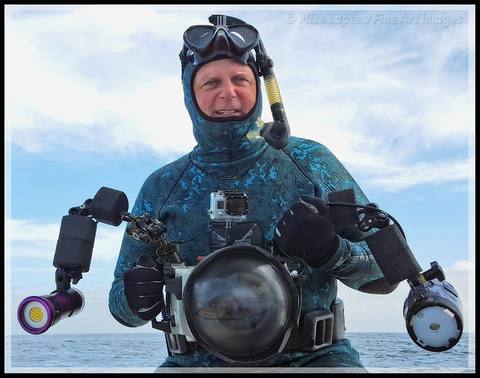 I have the best girlfriend in the world! Such a bad ass anniversary present! I love you so much!