Monday, November 02, 2015: I don’t want to jump to conclusions, but I had a visual burst of bassiness down Holgate way, right at dark. There were easily-seen schoolie bass just rolling on the surface…

Monday, November 02, 2015: I don’t want to jump to conclusions, but I had a visual burst of bassiness down Holgate way, right at dark. There were easily-seen schoolie bass just rolling on the surface on the edge of the Rip, toward the beach. I went with a popper and had six (count them) swacks. I made about 50 casts. Although I had no hookups, just seeing bait bounding about and my plug taking some serious attacks has me thinking things are about to bust loose. Yes, I'm basing that on nothing more than some South End close-calls on my part. Of course, there is the unslight matter of Ed Krzanowski's Classic 47-pound striper taken on (drum roll, please) a “lure.” (See below) That’s what I’m talking about. There's hope for attention-deficit casters like myself. Apparently, you don't have to sit idly around for half the day -- or half the night -- eye-begging baited rods to bend over double. Plugging is taking the fight to the target. My weapon of choice tomorrow will be slowly swum surface swimmers, enticingly sashaying along as an invite to generally lazy big-ass bass. Yum-yum, eat 'em up.

Below: Consider this "school bus" color ... based on tint of ocean water we have right now. 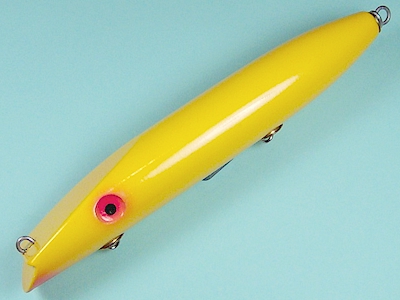 The ocean was pure glass all day; barely a wisp of air, which is most unusual for not only this time of year but also this period of climate change, when sky radicalness is seemingly on the loose. This entire week and into the weekend will not be pushing winds of any significance. If ever there's a week when the LBI fall fishing could shift over to the fast-lane, this week is it. And I have to think the north end might go whole-hog first.

This is a fine time to note recent NASA findings that the Antarctic is bucking the Global Warming bronc and is actually gaining ice, rather significantly. It's possible (and it's not my writing this -- this time) the extra, way-south ice build-up might account for the lack of promised sea rise to date.

I've said all along that climate change, although real as acid rain, is downright impossible to predict with any exactitude. There’s simply no guessing at the likes of sea rise in next-week terms -- or even next-decade terms. It's all up to the planet, which doesn't give an asteroid's ass about human predictions.

The planet has been through climate changes more times than it cares to remember. The current warm-up is a yawner on its cosmic wristwatch. What’s more, it couldn't care less if its human gasses or dinosaur flatulence that is heating things to hell and back. Been there, done that.

Weirder yet, to equal-opportunity employer Earth, human being are every bit as natural as any other living things that have come along. Sure, we might be depicted as fleas on the planet's back -- trying to get blood from a stone. We're essentially that ineffectual in the long run, even if we murder the atmosphere. We too shall pass.

Now, you wanna see one helluva planetary impact, even one that earth has been impressed by, check out algae and plants. Those buggers added oxygen to the atmosphere. Now their action has meant some long-term earth-changing impact. It makes the impacts of men, dinosaurs and asteroids look like dissipating drops in the evolutionary bucket.

Got out this afternoon. Tried the inside of the north jetty with plastics, nothing doing. Headed up along IBSP.

Must have seen 50-60 porpoise in a half dozed pods. Maybe the glassed off surface made for easy viewing.

Not a surface bunker splash to be seen but the finder had all kinds of surface and deep down marks.

Stopped on a couple and snagged 5 or 6 bunker and headed back to the inlet to work the rocks.

Still nothing doing on either rock pile. It was so smooth out there you forgot about all of the nasty weather the past month.

Neither Bobbies or Tony’s have spot or pinfish. They both expect fish on Wednesday. WP 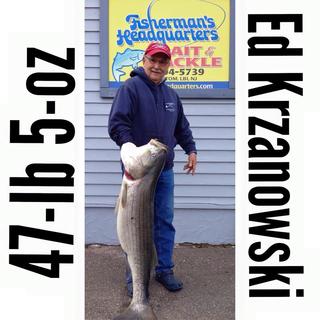 The bass bar got raised to the third floor at 7 a.m. Monday when Ed Krzanowski used a plug to best an eye-opening bass weighing 47 lbs. 5 oz. It was 47 inches in length and had a 28-inch girth. It was caught in Harvey Cedars.

Had to go to Plan B to fish this past weekend. The ocean was a little rough for my taste. We fished live bait in the inlet and hammered away at 26 to 27.99999 inch stripers. We did put a 28 and 32 inch fish in the box on Saturday's trip and three more 28 to 29 inch fish on Sunday's trip. Had a dozen fish for three anglers on Saturday and 23 fish for two busy guys on Sunday.

The forecast is for light and variable winds all week. We'll be running out the inlet and combing the shoreline for birds, readings, and bass. Casting light tackle with soft plastics or diamond jigging is always our first choice but I will bring the trolling gear, too, as there have been some heavyweight fish trolled out in the deep on bunker spoons. With a calm ocean we can run as far as we need to find fish.

Running Open Boat or charter every day thru December.

After missing the short lived plug bite Capt Jack Shae and I ran IBSP to the bathing beach without seeing much action. While there we did read lots of bait but could not find any bass or blues. By that time tide it was right for plan C, live bait back inside. There seemed to be a real good body of slot to 30” bass holding the area we fished. Action was steady for a good hour plus when we came in leaving them biting. Here is a picture of me with a slot and over 28”. Having off this week I am stoked at the weather forecast. Looking to sail an open boat Monday with 2 spots open (3 person max). This will be a light tackle plugging and live bait trip fishing around the inlet and back. Also have the other days and magic hours trips available. Fishing is hot and weather is going to be warm so give me a call if you want the do a back bay / inlet or ocean trip.

Marie Rhubart weighed in a 36.5" 15-lb 14-oz bass which was caught off of the Brant Beach surf on bunker. She is the first female angler to enter a fish this year.

Harold McMaster of Manahawkin weighed in a pair of
‪#‎bluefish‬ today for the LBI Surf Fishing Tournament. One 14-lbs and on 13-lb 13-oz. He caught both of them at about 2am in
‪#‎BarnegatLight‬ on a plug.
‪#‎FishLBI‬
‪#‎YellowEyeDemond‬
‪#‎FishermansHeadquarters‬