Friday, October 02, 2015: For a boring hurricane, I have to admit Joaquin has been not only interesting but one for the record books, as likely the longest near-stationary Atlantic cyclone in recorde… 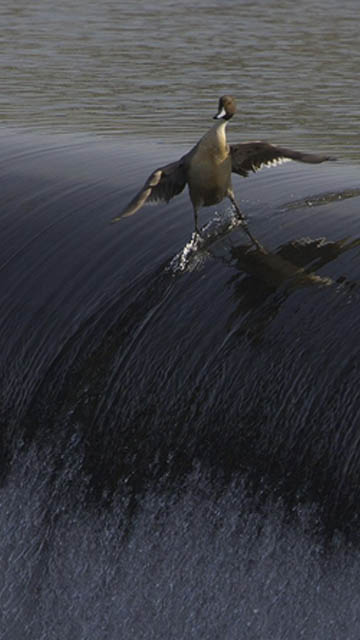 Friday, October 02, 2015: For a boring hurricane, I have to admit Joaquin has been not only interesting but one for the record books, as likely the longest near-stationary Atlantic cyclone in recorded history.

Below: Yesterday's look at H. Joaquin. 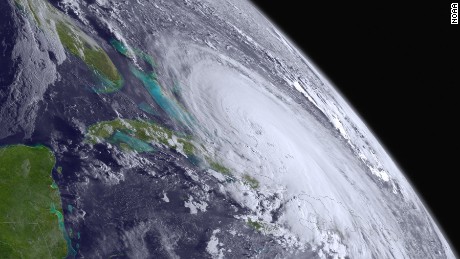 Of course, I have no doubt it has been anything but boring for the poor folks on the Bahamas. Here’s hoping lives are spared. I think many a building is already a goner. As to a rebuilding, here’s doubly hoping we all respond like after Katrina and Sandy. I know the Bahamas aren’t part of the US but they’re like a kissin’ cousin.

While it’s still not a done directional deal, the odds are now very high that the hurricane will be doing what it should have done from the get-go, go northeast, young man.

As to that boring part, that is my read on anything that has nearly all of us tirelessly watching TV screens while absolutely so little is happening -- for not just hours but day on end.

To at least keep our eyes open, we have this very odd nor-easter, in case you hadn’t opened your door in a couple days. As I repeatedly noted in here, this aggravatingly substantial wind, rain and high seas are not Joaquin, except for that obvious train of moisture into South Carolina.Actually, I overshot the rain totals, thinking as much as 20 inches might fall. 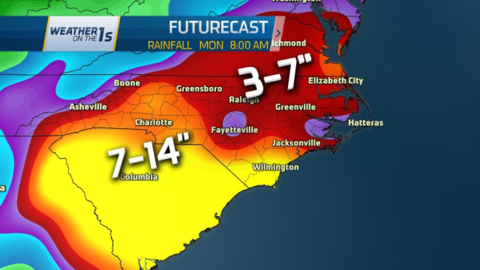 We’re currently getting riddled by, of all things, a “fair weather” high pressure system way to our north, rotating in serious winds off the ocean. Those winds are being enhanced by what can only be called “low-like” weather to our south. That southern instability is still only very minimally Joaquin, though the hurricane is tending to keep the southern instability powered up, again, with the abovementioned moisture flow.

By the by, if Joaquin were not there, we’d still be getting a more traditional nor’easter pattern, i.e. blocking high pressure to the north and an intensifying “Hatteras” low to the south. It would likely take the once-typical three days to pass. That historic three-day nor’easter pattern has gotten rarer and rarer over the past 25 years.

I still see things phasing down by Sunday.

QUICK SQUIGGLE NOTE: There as due joking and mocking over the dozen or so projected paths of the hurricane, especially when its future was in doubt -- and color-coded computers models looked like some kid with crayons going cold turkey off of Ritalin. I have access to many of those weather computers and I can assure they’re not all created equally. Here’s a modest overview of the primary national models:

Pun intended, they’re all over the map when there is any doubt about where a storm will form, then head. I follow the two or three main models, knowing that some of those lone and lonely squiggles, heading off on some tangent far from the beaten path, are actually following far less likely possibilities, sometimes based on equally rare previous weather occurrences. The odds are truly against them but, out of scientific fairness, they’re shown as a colored mapping line on par with the other lines out there. They’re not. But having them there actually adds integrity when the lines come “into agreement,” an expression you’re hearing more, mercifully, as Hurricane Joaquin finally decides it has had enough tropical sun on its back and shoulder regions.

In defense of the lone squiggles representing paths/models less taken, they are always within the realm of possibility. We should all appreciate them. One of my prime defenses for our living safely along the coast – as irrationalists tell us to abandon same -- is our growing ability to know just what’s coming at us, sky-wise. There is no better way to stay fully in the know than knowing all aspects of the weather forecast, even the rarer possibilities. To use a trite expression, it keeps us on our toes … our evacuation toes. Here’s a cup of sheer to those stand-up squiggles that quietly have our backs. 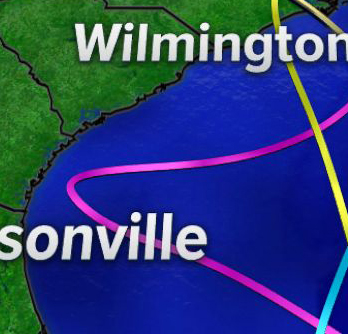 THE SUN’LL COME OUT …: And here’s some sweet music to windblown ears: We’ll be getting into a sunny, mildish, west wind pattern by early (to mid) next week. That stint of autumnal awesomeness might even hang around for a goodly stretch, though I see one potential disturbance by next weekend, which could stay south of us – as has been the pattern for months. 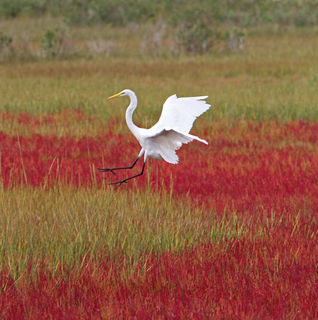 Which brings us to the opening of the Long Beach Island Surf Fishing Classic next weekend. Not only is this lengthy blow – actually to week old if you harken back to the previous batch of northeast winds – is really going to knock ocean temps down and surely stir the forage fish migration. I have to think this is good to great news for drawing in big bass and blues. Yes, I’m always kinda overly optimistic but I really think I have the elements on my side, make that the classic’s side, this time around.  I’ll be offering a load more Classic info this coming week in here. Stick around all fall … I also touch on lots of LBI stuff.

One of the two critical areas where New England fishermen search for cod may be in even worse shape than suspected.

Fishing managers already knew that cod stocks on Georges Bank were thin, but new data from the Northeast Fisheries Science Center says research boats caught less of the fish this spring than in all but one spring dating back to 1968.

A report from the center, given to The Associated Press on Tuesday, says the boats caught about 3.3 pounds of cod each time the net went in and out of the water last spring, compared with more than three times that amount two years earlier.

Those numbers were routinely more than 20 pounds per trip in the late 1980s.

The status of cod in Georges Bank, a broad swath of elevated sea floor off Massachusetts, could motivate regulators to again lower catch quotas for the area.

It’s more bad news for the faltering fishery, which generations of New England fishermen have relied upon to make a living.

Regulators and marine scientists have said overfishing hit the stock hard and warming oceans could be making it worse.

“Is that coming as a surprise from anybody who knows what the water temperature is out there? No, it shouldn’t be,” said David Goethel, a New Hampshire-based fisherman. “These fish are declining because of climate change.”

Regulators say the Gulf of Maine, home of the other key cod fishing ground off of New England, is also in dire shape – the National Marine Fisheries Service scientists said last year the amount of cod spawning in the Gulf was estimated to be 3 percent to 4 percent of its target level.

The status of the Georges Bank cod was the subject of a presentation to federal fishing managers on Wednesday in Plymouth, Massachusetts.

Managers to Gauge Herring Fishing's Impact on Other Species


PORTLAND, Maine (AP) — Federal fishing managers are gathering information to assess the impact of the herring fishery on other species and the ecosystem.


The New England Fishery Management Council is working on an amendment to the herring fishery that it says will account for the role of fishery within the ecosystem. It will also address the issue of localized depletion, which is what happens when fishing takes more fish than can be replaced locally or through migration.


Atlantic herring are used as both bait and food. Federal figures say the fishery was valued at about $31.9 million in 2013. That is the second highest figure since at least 1950.


The council is closing the public comment period about the impact of the herring fishery on Wednesday.

Maine Elver Fishermen Gets Jail Time for Evading Taxes on Harvests Valued at $370,000

An elver fisherman from Waldoboro will serve 90 days in jail after pleading guilty to failing to file income tax reports for years in which he earned more than $370,000 harvesting the tiny eels.

Paul L. Griffin Jr., 44, was sentenced Monday in Lincoln County Superior Court to 364 days in jail with all but 90 days suspended, and one year of administrative release, according to a release from Maine Attorney General Janet Mills.

In addition, he substantially underreported his elver harvests to the Department of Marine Resources in 2012 and 2013, and failed to file Maine income tax returns for those years, during which he earned more than $370,000.

According to Mills, Griffin also will pay restitution of $67,762 and forfeit his ability to harvest elvers for the 2016 season. He has already paid $6,500 in restitution and will be required to make regular payments toward the remaining balance.

Mills cautioned harvesters to report their harvests truthfully to the DMR to allow officials to effectively manage and conserve the elver fishery in Maine.

“Elver harvesting can be extremely lucrative, but we must take management of the resource very seriously, or the fishery could be gone for good,” Mills said in the release. “A few bad actors could jeopardize the entire fishery. This case demonstrates excellent collaboration between different state agencies and the Attorney General’s Office appreciates the cooperation we received.”

This case was investigated by the Maine Revenue Services’ Criminal Investigations Unit and the Department of Marine Resources. Assistant Attorney General Gregg D. Bernstein handled this matter for the Attorney General’s Criminal Division.

Griffin was the third person accused of not disclosing elver fishing income to be sentenced in the past two years, Bernstein said Thursday. He said there are half a dozen similar cases pending.

Below: Some terrier make lousy boxers ...